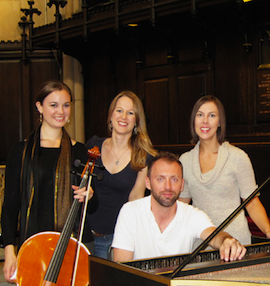 Les Sirènes — The name of this young ensemble, founded in 2009 and making its West Coast debut this weekend for the San Francisco Early Music Society, evokes images of lonely sailors drawn inexorably towards the dulcet tones of enticing but deadly women. The name promises beauty and excitement. The ensemble delivered both, if a little unequally.

The beautiful they have mastered. The ensemble is headed by sopranos Kathryn Mueller and Kristen Watson. These are singers of easy agility, with crystal clear, tension-free production. They are Early Music singers in every sense of that term; sensitive and intelligent, stylistically polished, and lithe and lovely. Combine those musical qualities with flawless Italian and some of the greatest chamber music of the 17th and early 18th century, and what more could one ask for?

The answer is drama, which was somewhat lacking from both vocalists, especially in the concert's first half. They opened with madrigals by Claudio Monteverdi, music demanding that the performers be as expressive as the poets who wrote the texts. If you don't know Monteverdi's madrigals, then this couplet from the famed Torquato Tasso will give you some hint of the atmosphere:

(Ah, foolish and blind world! Ah, cruel fate,
that has made me the minister of my own death.)

As you might expect, this music features aching suspensions and sudden, juicy dissonances. It was written at the birth of opera and the beginnings of harmonic theory. Who knows how it was performed in the mannered courts of 17th-century Italy, but we are a society with access to gritty cop dramas and rednecky soap operas, and we crave some performativity. Extramusical elements would have been one possibility — perhaps the singers might have acted with one another, gestured towards one another, looked longingly at one another, or glared at one another. But theirs was a pretty stodgy concert performance.

The beautiful they have mastered ...these are singers of easy agility, with crystal clear, tension-free production...sensitive and intelligent, stylistically polished, and lithe and lovely.

There were unexplored musical possibilities, too. The group obviously likes ciacconas and other pieces over ground bass lines, since they performed a lot of them. They began, for instance, with one of Monteverdi's most famous duets, Zefiro Torna, and rendered it in a straitlaced way that emphasized the hypnotic features of this piece more than its possibilities for liberating interpretive freedom. At times, the impression that the program’s first half made came dangerously close to that of two lovely ladies singing pretty music prettily. And this repertoire can be so much more.

The vocalists don’t have to look far for models: their continuo team (i.e., the rest of the ensemble) played adventurously throughout the evening, and especially in their spotlight moments. Cellist Cora Swenson played a sonata by Geminiani with maturity and panache; she elided movements in inventive ways, keeping the tension high by avoiding the normal large-scale formal breaks. And the ensemble has done well to land Michael Sponseller, one of the most decorated U.S.-based harpsichordists. His awards are well-deserved; his virtuosity (and he is a virtuoso) never domineers over the music. Keeping with the first half’s theme of quasi-improvisational music over repeating patterns, he performed Frescobaldi’s Cento partite sopra passacagli. This work, as its name implies, is made up of lots of little variations, and Sponseller had clearly thought hard about grouping and pacing. The effect was mesmerizing.

The singers had their chance to shine in the second half, with Italian music by Handel. That composer may now be most famous for music that he wrote on the British Isles, but he spent his apprentice years in Italy, hanging around with Cardinals and writing music for them and the castrati who frequented their social events. Les Sirènes sang some of this repertoire and also some later duets written in the London period. Handel’s humor especially helped the singers break the ice, and the motoric drive that was the composer’s specialty worked its usual charm on the audience. Handel recycled some of this Italian music in Messiah, and de-familiarized favorites hold inevitable charm. Especially effective was their rendition of Quel fior che all’alba ride (featuring themes that Handel re-used in “And He Shall Purify” and “His Yoke Is Easy”). Here the singers showed themselves fully capable of the operatic theatricality that this music really needs to be successful.

I heard the group on Friday evening in Palo Alto’s First Lutheran Church. There will be repeat performances on Saturday in Berkeley and Sunday in San Francisco. The ensemble is certainly worth hearing, a mix of emerging and established talent with beautiful sound and a real potential for future success.