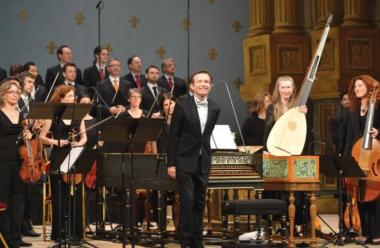 The attractions of Christophe Rousset and Les Talens Lyriques’ recent recording, Pergolesi: Stabat Mater (Alpha 449), are vast. Vying for pride of place, in a 66-minute collection of 18th-century Neapolitan sacred music that also includes Nicola Porpora’s Salve regina (Hail holy queen) in G major for soprano and Leonardo Leo’s Beatus vir qui timit (Blessed is the man, Psalm 112) for alto, are the timeless beauty of the music; Rousset’s perfectly judged instrumental balance and tempi; the impeccable musicianship of his ensemble; the gifts of the two soloists, soprano Sandrine Piau and countertenor Christopher Lowrey; and the quality of the recording itself. 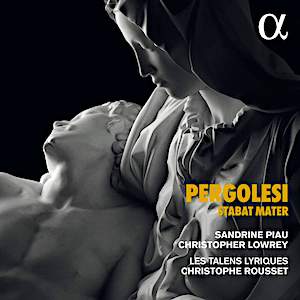 The story of the Stabat Mater — in 1736, the dying 26-year old Giovanni Battista Pergolesi reached up from his deathbed in a Franciscan monastery and handed it to one Signor Giuseppe De Maio “to remember him by” — would count for only so much had not its beauty been so great that, within a few years, Johann Sebastian Bach had already set it in German paraphrase. So vast is the appeal of the most frequently printed work of the 18th century that ArkivMusic hosts 57 recordings — some are duplicates — of which this effort, recorded in France in July 2018, is the latest.

A key reason to choose this recording is the opportunity to hear the wonderful Piau (b. 1965) in her mature prime. I’ve only heard Piau live once, in a Cal Performances recital in Hertz Hall where her singing was like springtime itself, but her recent recordings display an interpretive depth that puts her in a class by itself. As perfect as her trills, rapid runs, and ornamentation are, it is the heartfelt nature of her singing that marks her a true artist.

What took me by surprise is that, in music often performed with classical restraint, Piau pulls out the dramatic stops in her pleading solos. While they’re always tasteful and in no way beyond the bounds, her wide emotional range may come as a surprise to lovers of historically informed Baroque performance who are fond for Emma Kirkby, Barbara Bonney, and other more emotionally restrained artists. Piau is always careful to achieve a perfect balance with what seems to be the smaller-voiced and more emotionally discreet Lowrey, but in her solos, she drops the tethers. While she certainly doesn’t sound like a Puccini heroine, there is no mistaking her identification with the suffering of Mary, the mother of Jesus, as she watched him hang in torment on the cross.

As is the case with most countertenors, Lowrey’s range of tonal expression is more modest, and perhaps more in line with that of the castrati who originally sang the alto part. Technically, he’s superb, and meets every demand that Pergolesi and Leo present to him with exceptional skill and vocal beauty. Philippe Jaroussky may be a bit more sublime and Andreas Scholl more pearly-voiced on their respective recordings, but Lowrey is excellent in his own right. His timbre also blends perfectly with Piau’s.

The opening of Porpora’s Salve regina cantata is so sublime, especially in Piau’s throat, that anyone who does not already know his music will immediately want to seek out performances by Bartoli, DiDonato, Gauvin, and a host of other superb artists. Piau is gloriously free and radiant on top and exhibits no desire to sing with the kind of vocal “smile” that makes Carolyn Sampson’s singing so special. You’ve got to hear her performance. Lowrey’s “Misericors,” in Leo’s cantata, may not sound that miserable, but his singing, too, is quite special.

Finally — this will be a major attraction for people with fine sound systems — the engineering by Laure Casenave and Vincent Mons is demonstration class. Heard in 24/96 hi-rez WAV file format, the recording successfully captures the open acoustic of France’s Église Notre-Dame de-L’Assomption d’Auvers-Sur-Oise. The orchestra is set behind the musicians, with instruments and voices surrounded by ideal reverberance that faithfully delivers the sound of live performance when enjoyed from the best seat in the house.

That you may already own and treasure one or more recordings of Pergolesi’s work on period instruments gives additional reason to add this one to your collection, if for no other reason than to see how it stacks up. Available for download and streaming as well on CD, Rousset’s second and far-better recorded version of Pergolesi’s Stabat Mater is a must.

The Loveliness of Sandrine Piau

Christopher Lowrey Gives a Soul-Shaking Performance With Voices of Music

Approaching Perfection in Pergolesi and Handel