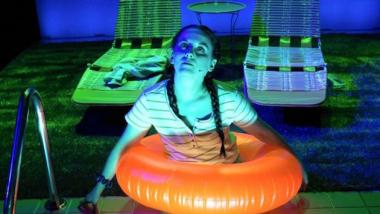 “Am I ripening or starting to rot?” asks Cheryl, aka Chunky, lounging by her backyard pool in the aria that opens Chunky in Heat. A new opera with a libretto by A.M. Homes and music by Jason Cady, Paula Matthusen, Erin Rogers, Aaron Siegel, Shelley Washington, and Matthew Welch, Chunky had its world premiere this weekend at The Flea Theater, presented by Experiments in Opera and Contemporaneous under the direction of Alison Moritz.

The dichotomy between ripeness and rotting suffuses the piece. Kate Noll’s luridly bright set has the ecstatic colors of synthetic fruit, but the splashy surface covers up the gnawing decay of unprocessed grief. Cheryl lives with her parents and sister Abigail in Beverly Hills, and they’re all mourning the death, three years ago, of the family’s son, Billy. To process their loss, they obtained a sentient, talking tree to record them. (The tree doesn’t quite understand how humans work but is doing its best.) It hasn’t really helped — the mother obsessively replaces Billy’s fish each time they die; the father hurls his shoe at the wall in an emotional outburst; Cheryl remarks “If time kept moving it would be three years ... But time, time stopped.”

In this timeless haze, the family is joined by Walter (a boy next door that Cheryl fantasizes about having sex with), Abigail’s nameless fiancé, a shapeshifting coyote who moves with a twitchy energy somewhere between paranoia and hyperactivity, and a forlorn beekeeper. Such an assortment suggests a comic sensibility, and there are moments of levity, but for the most part, the show’s energy is more hallucinatory than comedic. By the end of the opera, Abigail has died,  been cremated, her remains placed in pill bottles, Walter has disappeared off to Harvard, and Cheryl’s parents lie in comas on the lawn, hooked up to medical equipment slowly draining its battery in a summer-night blackout.

The uniformly strong cast does an admirable job infusing these characters with life. Sarah Daniels is captivating as Cheryl, using her pliant soprano to excellent effect as she ranges from shy to triumphant to distraught to afraid. Rachel Doehring’s sharp-edged soprano is perfect for Abigail’s neurosis and the shapeshifter’s impulsivity. As Walter, the fiancé, and the beekeeper, Timothy Stoddard is playful, brusque, and bewildered. Emily Geller brings a sadness to her role, preventing the mother from becoming a one-dimensional fatphobic scold. Joshua Jeremiah’s rich baritone is imposing and bereft as the father, and Jason Cady, prerecorded as the tree, hits a hilarious mark between computerized monotone and natural speech. David Bloom conducts with energy and precision.

Six composers writing the score could have produced a disjointed hodgepodge, but the work is remarkably coherent, the writing strong and smart. Homes’s surreal libretto tends towards a diffuse drama; the score amplifies the psychological stakes, turning what could have been a meandering ramble into an engrossing theatrical event. It’s hard to pick highlights, but special commendation must go to Welch’s delightfully antic shapeshifter scenes, Siegel’s brilliant deconstruction of banal lounge music in the college admissions sequence, and Matthusen’s radiant, mysterious finale.

Chunky in Heat is Homes’s first libretto, and although it’s quite strong, it falters in places. The opening feels out of step with the bulk of the work, like it’s building towards something trashier than the rest, and Cheryl’s return from college feels forced. It’s a letdown to discover how the family acquired the tree; the device felt stronger when it was just there, an inexplicable part of an inexplicable world.

Still, the accumulation of lyrical poetics culminated with harrowing power. As Cheryl bids goodnight to everything around her, she says of the tree “We wanted to create a record. As though that’s the same as leaving a mark.” It’s dropped in lightly, but the reverberations linger. Chunky moves with the logic of a dream, and like a dream, it speaks of things too deep-seated for pure rationality to touch.

The LA Phil stages a “staggeringly ambitious production” of the groundbreaking opera.