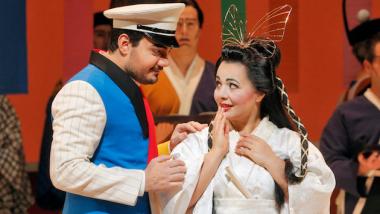 A Madama Butterfly with Hard Edges

On November 6, Puccini’s Madama Butterfly was performed at San Francisco Opera for the 204th time. The previous night, Philip Glass’s Akhnaten opened for the first time at Los Angeles Opera. The L.A. premiere attracted protestors who objected to the representation of an Egyptian pharaoh by a white countertenor. In S.F., the path to the opera house was clear, although Madama Butterfly features white singers playing Japanese characters and trades on Orientalist stereotypes.

Some of the opera’s problems are built into the music and text, but some can be overcome by a thoughtful production. San Francisco Opera’s staging brutally exposes Lt. Pinkerton’s racism and takes inspiration from Japan without stereotyping.

Some productions try to soften Lt. Pinkerton’s character to heighten the romance of the first act. Director Leslie Swackhamer’s staging never allows us to fantasize: This Pinkerton is a creep and a boor. He licks his lips in anticipation when Cio-Cio-San appears for their wedding. He has obviously made no effort to learn or respect Japanese customs, tossing around the spirit statues of his bride’s ancestors, botching the wedding ceremony, and slapping a shocked official on the back. This interpretation effectively avoids some of the opera’s problems (like romanticizing an “exotic,” mail-order, child bride) without undermining the pain of the final scene. It is Cio-Cio-San’s faith and despair that make the ending moving, not lost potential for real, mutual love.

Jun Kaneko’s colorful production splatters polka dots and stripes across the set, the costumes, and even the singers’ faces. The result catches the eye and sidesteps the challenge of recreating a historically accurate Japan. The production still has a strong sense of place, aided by kimono-like garments, flicking fans, twirling parasols, and stage elements borrowed from traditional Japanese theater. Most notably, four kurogo (stagehands, in traditional Japanese theater) dressed entirely in black (including box-like mask-helmets) tiptoe and creep across the stage to change sets and whisk props in and out as needed. But despite its clear Japanese sources, the world of the opera is abstract—neither a real location nor a parody.

Many moments are very beautiful. Cio-Cio-San’s disrobing is artfully silhouetted through a shoji screen. Flower petals swirl around during the second act, agitated by the singers’ and kurogo’s fans and by the hems of dresses. Slowly changing projections (a bit blurry, perhaps due to a technical malfunction) show day passing into night and night passing into day. A red circle on a white field dominates the final scene—the Japanese flag and also Cio-Cio-San’s flowing blood.

A good Butterfly depends on a good Cio-Cio-San, and Lianna Haroutounian delivers vocally and dramatically. Her ringing tone has surprisingly sharp edges at times, but she also spins gorgeous, long lines of sound. In “Un bel dì,” she showed off a range of textures, from shimmering to conversational. As her undeservedly beloved Pinkerton, tenor Vincenzo Costanzo sang with consistent tone and smooth legato. Chesty high notes sounded healthy but didn’t thrill. Costanzo’s acting showed more variety than his singing, with a believable shift from uncaring caddishness to more mature remorse.

Anthony Clark Evans made his San Francisco Opera debut as the American consul, Sharpless. He came across as an older, fatherly figure, walking with a cane and mixing affability with an underlying seriousness. His warm, crackling baritone fit the role well. Zanda Švēde sang Suzuki with a creamy mezzo and no hint of her announced cold. Her flower duet with Cio-Cio-San was a special delight; Švēde’s and Haroutounian’s voices have textures that blend together beautifully. Other Adler Fellows made smaller, excellent contributions as Kate Pinkerton (Julie Adams), the Imperial Commissioner (Matthew Stump), and Prince Yamadori (Edward Nelson).

Conductor Yves Abel led the San Francisco Opera Orchestra in an admirably restrained reading. Wide-ranging dynamics were kept within bounds to avoid overwhelming the singers, and Puccini’s lush textures were emphasized without wallowing. Quiet, precise staccato flutes and plucked strings during the humming chorus were a nice change from the sea-like swells of much of the score. The rest of the intermezzo between the second and third acts was dreadfully dull, but that’s the fault of Puccini and of the stage director, the former for writing such a long, musically unexciting interlude and the latter for making nothing of it. The San Francisco Opera Chorus sang (and hummed) well as usual, with beautifully layered sound and well-coordinated parasol movements.