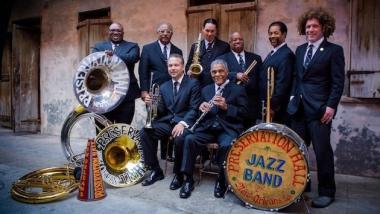 Marching Into the Future With the Preservation Hall Jazz Band

The Preservation Hall Jazz Band seems to be everywhere these days, an all-too-rare cause for optimism about the state of American culture in these benighted times. While making my daughter French toast Sunday morning I turned on the radio in the middle of an NPR “Weekend Edition” piece detailing an upcoming “Krewe du Kanaval” Mardi Gras collaboration between several Arcade Fire musicians of Haitian descent and Preservation Hall, the French Quarter institution that’s played an invaluable role in presenting and transmitting traditional New Orleans jazz for more than half a century.

With French toast-fortified daughter and a friend in tow I arrived a few hours later in SFJAZZ’s Miner Auditorium, where the PHJB was concluding a four-day residency with a new collaboration. Over the past decade, the ensemble has exponentially expanded the audience for the Crescent City’s uproarious, polyphonic trad sound via performances and projects with the likes of Bonnie Raitt, the Del McCoury Band, Tom Waits, Andrew Bird, and My Morning Jacket (as well as fellow New Orleanians Dr. John, Allen Toussaint, and Irma Thomas).

At the unlikely hour of 11 a.m., the PHJB was ready to explore common musical ground with a kindred ensemble steeped in a very different musical world. Like Preservation Hall, the East Bay group Los Cenzontles takes its name from the cultural center where it’s based (the Los Cenzontles Cultural Arts Academy in San Pablo). And similar to the PHJB, Los Cenzontles plays music that originated in communal celebrations, festivals, and street parties. But where PHJB is located in the city that gave birth to its music, Los Cenzontles is engaged in the tricky process of musical preservation far from the source (though the group has also pursued collaborations with an expanding array of artists, most recently Jackson Brown).

Steeped in various forms of Mexican roots music, Los Cenzontles has expanded its stylistic territory from Vera Cruz and Michoacán to East Los Angeles and the East Bay, turning into a vital and evolving outpost of Mexican-American culture. With PHJB, Los Cenzontles is expanding the cultural conversation yet again, and judging by the first encounter Sunday morning the results bring the fiesta to the laissez les bon temps rouler imperative.

With an eight-piece version of the PHJB joined by six members of Los Cenzontles, the combined ensemble kicked off their collaboration with a Spanish language version of “Early in the Mornin’,” a proto-R&B hit with an Afro-Cuban groove introduced by Louis Jordan and His Tympany Five in 1947. The Gulf Coast blues musical meld sounded graceful and grooving with Silvestre Martinez covering the clave beat on congas.

“Creí,” a piece by Los Cenzontles, the Estrada Brothers, and Los Lobos’s David Hidalgo from the 2008 album Songs of Wood and Steel, featured the gorgeous harmonies of Fabiola Trujillo and Lucina Rodriguez, while Los Cenzontles founder and guitarist Eugene Rodriguez and PHJB clarinetist Charlie Gabriel provided soulful counterpoint. And “Llorarás” (You Will Cry), which is usually a bolero lament, turned into a jaunty celebration.

The show closed with an extended version of the Mardi Gras standard “Aiko Aiko” and an encore of the gospel-powered “Keep Your Head Up,” with Los Cenzontles adding in vocal riffs and percussion accents when space opened up. The evening felt like a very successful first date, and according to Eugene Rodriguez, the courtship will continue. “I’m pleased that Ben invited us to NOLA later in the year to explore our musical connections,” he wrote in an email, referring the PHJB’s bassist/tuba and leader Ben Jaffe.

The connection with Los Cenzontles is another step in the PHJB’s world conquest in the aftermath of Hurricane Katrina, when the group took to the road during the two years its building was shuttered. The ensemble’s far-flung web was on display Thursday night when the group was honored at the SFJAZZ Gala. Another exceptionally well-produced SFJAZZ event with at least a dozen moving pieces, the concert captured the West African diaspora threads that connect New Orleans to other slave destinations around the Americas, particularly Cuba and Brazil.

Seamlessly transitioning from one musical situation to another the Gala concert was at its best with maximalist and minimalist groupings. On the more is more side, New Orleans trumpeters Terence Blanchard and Christian Scott and piano patriarch Ellis Marsalis joined for a glorious rendition of “Just A Closer Walk With Thee.” And on the minimalist side, piano legend Chucho Valdés and conga maestro Pedrito Martinez, both of Cuba, bounced through a thrilling version of “Ol’ Devil Moon.” And in a preview of coming attractions, the extraordinary 25-year-old Cuban vocalist Daymé Arocena belted out a sensuous bolero with her luxuriantly velvety contralto (she performs at SFJAZZ on April 22 with pianist Roberto Fonseca).

The SFJAZZ Gala honors adds another layer to a deep and unparalleled relationship between the PHJB and the Bay Area. The group wasn’t a decade old yet in the late 1960s when it started doing annual summer residencies at Stanford University. The budding relationship with Los Cenzontles looks like a new chapter in this quintessentially American epic.