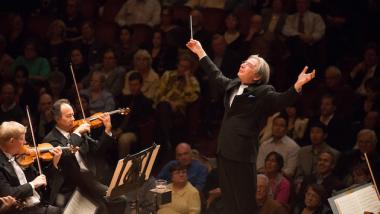 The Los Angeles Philharmonic had a sudden problem. The orchestra’s former music director, Zubin Mehta was supposed to have led his old band in Mozart and Bruckner last weekend, but he had to cancel suddenly due to a shoulder operation that will put him out of action for at least three months.

What to do? Well, in one of those miracles of serendipitous availability, the L.A. Phil was able to replace one superstar conductor with another.

The San Francisco Symphony’s Michael Tilson Thomas had some free time the week before his 73rd birthday (Dec. 21), so he traveled south to Walt Disney Concert Hall to fill in. It was as if the Giants had sent Madison Bumgarner to start in place of an injured pitcher on the Dodgers. Fortunately, the historically fierce L.A.-vs.-S.F. rivalry on the baseball field and elsewhere doesn’t exist for the cities’ orchestras, and MTT received a hero’s welcome in his old hometown on Thursday night.

MTT and the L.A. Phil, of course, go back a long way. He was a co-principal guest conductor here from 1981 to 1985, and after nearly two decades of estrangement, their occasional collaboration resumed when the L.A. Phil moved into Disney Hall. (Indeed, MTT will have a two-week residency during the Phil’s centennial season in 2018–2019).

Their present rapport is such that in the opening of the Mozart concerto, MTT was able to summon from his L.A. forces something resembling the glowing, polished, beautiful sound that he has been cultivating in San Francisco, with elegant phrasing even at the fastest tempos. Buniatishvili is known for her delicate feather-like touch — at times, she veered close to the threshold of inaudibility — yet she provided enough dynamic contrast elsewhere to prevent Mozart from sounding precious or effete.

Even though Bruckner and Mahler are often paired together — not always accurately — on the historical timeline, Mahler conductors in general are not known for their Bruckner and vice-versa. There are exceptions who are equally comfortable in both camps, like Bernard Haitink and Zubin Mehta, but not many. In the case of MTT, this seems to ring true; there is no Bruckner at all in this Mahler man’s discography and I don’t remember him conducting Bruckner when he was in L.A.

Yet now having reached the grand-old-maestro stage of his long career, Tilson Thomas is venturing more into Bruckner’s world; he led the Seventh Symphony in San Francisco in 2013 and again there and on the San Francisco Symphony Asia tour a year ago. He has his own ideas, bringing to the Seventh a fresh, extroverted, almost American sound. He also displayed a more physically mobile podium manner with the L.A. Phil than in his San Francisco concerts that I have attended recently — more like the way he was over 30 years ago here.

Once MTT had surmounted the first aborted climax in the opening movement, he took off at a Scherzo’s pace, with fascinating quirks in phrasing here and there. There was no lingering at the outset of the great expansive Adagio, and the trip to the summit of the movement was relentless. Just before the climax, MTT held back for a split second before letting the famous cymbal crash rip, fulfilling the dramatic impact of the moment. The third movement was straight-ahead, vigorous, with good rhythm that became even stronger upon the repeat of the material, and the finale mostly blazed at a galloping pace.

You won’t find the monumental constructions of old Brucknerians like Günter Wand, Eugen Jochum, or Herbert von Karajan in MTT’s Bruckner, nor the cosmic spells of Wilhelm Fürtwangler. But for ears attuned to his passionate advocacy of Mahler, MTT’s way will find some satisfying common ground.

The Piano Musings of Scott Wollschleger