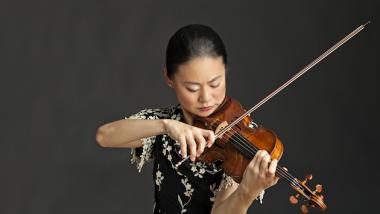 For most of last week, much of Marin county and, likely, the entire Marin Symphony community were in full “Midori Mode.”

As part of her advocacy for youth music programs, channeled through her Orchestra Residency Program, the former child prodigy, violin superstar, and educator spent five days with the Marin Symphony Orchestra (MSO), visiting local schools, and performing with and in front of a host of school children.

She topped things off with three public concerts: last Friday and Saturday as soloist in the MSO’s subscription concert under Alasdair Neale, and on Sunday during “Orch’apalooza,” together with all three Marin Symphony Youth ensembles.

Midori’s contribution to the MSO — other than her inspirational presence — was a wonderfully executed Concerto for Violin and Orchestra by Benjamin Britten (1913-1976).

Britten’s violin concerto dates from 1938-39. It is a physical and emotional tour de force and pushes the soloist to the limit. In the first movement, the solo violin starts out quietly and serene in a mournful soliloquy, but soon reaches a level of frenetic anxiety that requires a high degree of violinistic athleticism, only to end in a breathtaking episode from which the solo voice gradually fades into total nothingness.

Midori’s muscular playing and virtuosic agility are a sight to behold. She gets into her performance with her entire physique, delving into her instrument as if she has to extract the sound from her 1734 Guarneri del Gesù by force.

She was especially brilliant in the cadenza at the end of the concerto’s central scherzo, and in its somber finale, written in the form of a passacaglia: a set of variations over a repeated bass motif.

When he wrote his (only) violin concerto, Britten was very much preoccupied with the atrocities of the Spanish Civil War (1936–39), which came to a bloody conclusion when he was completing the piece. This is reflected in the use of Spanish rhythms throughout the violin concerto, but above all in the emotional weight of the nine variations of the piece’s final movement, which Midori brought to a mesmerizing end.

Britten’s concerto was sandwiched between the concert opener Devil’s Radio (2014) by Mason Bates, and the equally colorful Concerto for Orchestra, which Hungarian composer Bela Bartók wrote in 1943.

Despite their obvious differences in length, purpose, and musical source material, these pieces have several things in common. To name a few: Both compositions were commissioned by a conductor (Alasdair Neale and Serge Koussevitsky, respectively), and both serve to explore, expand, and showcase new and innovative sound possibilities of the traditional symphony orchestra.

Bartók (1881–1945) did so by combining elements from classical Western art music and from Eastern European folk music, including nontraditional modes and scales. Bates (born 1977), who doesn’t use any of his signature electronics in Devil’s Radio, pulls heavily from techno, dance, and blues.

What both pieces most certainly have in common is their solid musical construction, power of expression, and ability to serve as a vehicle for maestro Alasdair Neale and his Marin Symphony to impress and shine.

The virtuoso violinist, academic, and activist discusses the mysteries of making music.