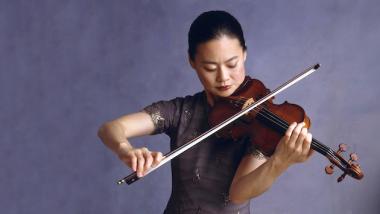 Prodigy’s End: The Need to Play On

We went to see Midori the other night at a rehearsal of the Marin Symphony Orchestra, which was preparing for a series of weekend concerts. The rehearsal was focused on Benjamin Britten’s Violin Concerto No. 1. And here she was, Midori (Goto), at 45, as superb as ever, yet always slightly enigmatic, a Piaf who, at 11, played Bach’s Chaconne as an audition to get into Juilliard’s precollege program; who Zubin Mehta called “one in a million;” whose legend includes the night at 14 when, in the course of about three minutes she broke two E strings while performing Leonard Bernstein’s Serenade; Bernstein, himself, on the podium. Midori ever so naturally took the first violinist’s instrument and then the second violinist’s instrument all the while barely missing a note.

Midori is that former prodigy-celebrity once portrayed on 60 Minutes; and the psychology student who wrote her master’s thesis on pain, and the woman who, in 2012, won the Crystal Award from the World Economic Forum at Davos, and who spoke before the U.N. last fall. She has always been the driven artist — in 2016, she performed more than 80 concerts — as well as an academic and a bookworm. And increasingly over the last 20 years, she has also become an activist, traveling from one end of the world to the other (most recently to Nepal), sharing her conviction in the energizing and binding power of music, particularly for children.

She cannot say where her interest in activism comes from, her family perhaps, but she is not tied to an ideology. When asked whether she thought the new president might have an effect on the arts, for better or for worse, she flashed her famous smile — at once a mask perhaps but set with genuine humility — and replied that unlike many of her colleagues, she will not offer political comments. Politics, and family, her lost pregnancy in 2014, are all strictly private matters, and so always a trailing mystery about the magician’s identity.

We sat with Midori in her dressing room during a rehearsal intermission; she had come to town to perform but also to lead a series of workshops with the Marin Symphony Youth Orchestra. This is part of her highly regarded Orchestra Residencies Program.

She’s remarkable to watch, of course: Midori of the spirits, pitching and yawing like a mariner riding the quarterdeck, or else a Queen Lear railing against the elements — and yet, at the same time, with the elements.

“You can’t do it with just your hands,” she said, referring to the need for space to perform, the space in which to bring her whole body to bear. When she plays, she grounds herself with the left side of her body, which is the classical way; the right side is the dreamer if you will. She characteristically tucks strands of hair behind her right ear, taps occasionally with her right foot, and then her bow arm, moving furiously, particularly with Britten, occasionally dragging the bow, and you see how she could go through E strings.

From her view in that tight, very intimate place, her chin on the cloth, so close to the bridge and where the bow hair touches the string, it’s there that she enters some sort of upper room. Occasionally, she looks as though her eyes are closed, but they are not — “otherwise I would get dizzy. No, I am looking down.”

Actually, in those seemingly ecstatic moments, she’s looking down at the music — where there is none. She actually sees the score in her mind, not always but often; she even sees the markings that she or someone else has made. Some people see colors; she does not. But what a mind’s library: “Thousands and thousands of pages which, with a little memory, I can draw out.”

“You could call it a zone,” she went on. “It’s a wonderful place, and not like anywhere else. I can only get there by playing, and it’s not like I don’t feel that moment. I’m in that world at that moment which I can’t recreate except when I’m performing. It doesn’t come while practicing … Afterwards, I can only say I was there. I know that it exists. I go there often.”

“A refuge,” we suggested.

She shook her head.

“I go there because I do. No other reason.”

Such is Midori’s detachment. She resists the journalist’s desire to concretize, to demand a “scene” or proximate cause. She rejects the desire to reach for the metaphor to explain it all. That’s too narrow a range for her, too limiting. And so what keeps her fresh? What keeps her inspired? Walking down the street keeps her fresh; the sky, a sound in the kitchen. The slightest thing keeps her inspired. It’s the sum of her heightened sensitivities and remarkable toughness underneath the guise of fragility.

And so by the same token she has no favorite music, nor any dreaded music. “The pieces I won’t play are those that don’t fit my hand,” she said. “I love music and I’m very detail oriented, but it’s not just the details, l love the whole idea of making music. It’s the same way I like to cook. I like the act of cooking; it’s not one particular dish. It’s just cooking. It’s not the left hand or the legato; it’s just playing.”

With This, I Am

Midori’s closest partner always appears to be her instrument. For almost 20 years that has been her beloved Guarneri del Gesù, the “the ex-Huberman,” made in 1734. “With this, I play,” she said. “With this I lean, with this I study, I teach, I travel.”

So much good has come from that instrument. And not least the way it has helped her feel ever closer to music. “I hear music differently now than I did 20 years ago. Partly because my connection to music gets closer and closer to me. I don’t think about it so much. Maybe I’m trusting my intuitions more, but that doesn’t mean I’ve become less intellectual. It’s just that I feel more relaxed. I feel less inhibited. When you’re young you feel fearless in a certain way, and then as you get older you feel also fearless but in a different way.”

She added, “You feel more accepting, less judgmental. You don’t see change in terms of being negative or positive; it just is.”

Someone told her once that “Music is a microcosm of one’s life.” It’s become a kind of koan, which she draws out and considers from time to time, and although she has no definitive translation, no clear revelation, she has found that music in her life has a circular quality. “It’s like something you had thought about so much and then you went on to some other thing, and then you come back and you remember what that was and the cycle starts again.”

Just now Midori, ever resilient, and ever reluctant to see the world or anything in terms of dialectic, has come to know one truth above all. “I have to perform, I have to do it. I can’t imagine not doing it. That excitement that I feel as I walk out on stage, I just love it.”

As an aside, in a discussion about her interest in psychology, and her thesis on pain, Midori talked about the capacity to block out pain and gave the example of being assaulted by a lion and how once in “survival mode” pain may not seem to exist, because in that moment there’s no greater goal, no greater sensation than the desire to be alive.

Watching her in the bulb light of her dressing room, her face refracted in the mirrors, it occurred to us the various meanings of survival mode and feeling “alive.”

The great violinist drained every ounce of emotion from Britten’s Violin Concerto in a triumphant appearance with the Marin Symphony.