Beethoven’s Violin Concerto opens with the longest of his instrumental movements, about the same length as the finale of Symphony No. 9. By the last half of the 20th century, ultraromantic interpretations often turned the first movement into a warhorse with ponderous Klempereresque coddling. At a concert in 2012, I heard Thomas Zehetmair as soloist and conductor of the Chamber Orchestra of Paris turn it into one of those “Oh! That’s what it’s all about” experiences. The key was an esthetic where soloist and orchestra were in constant contrast yet intimately bound to one another. This Beethoven is not about pretty melodies but simultaneous contrasts, performed with seamless continuity across three movements.

Midori, who at 49, is in her 38th year of performing and is a person of enormous integrity and presence. She holds one’s attention by just standing still. Her extensive liner notes for this new recording for Warner Classics convey both her intellectual depth and her awareness of current events. And her violin playing here retains its sweet tone, perfect pitch, superb technique (despite one or two near misses), and beautiful phrasing and lyricism. What it lacks is a breadth of style. Drama, assertiveness, and overall structure are missing. 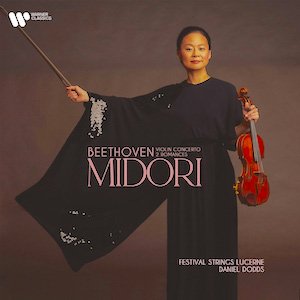 At 24 minutes, the opening movement here seems even longer with both Midori and conductor Daniel Dodds lacking a steady pulse, despite Beethoven’s writing a persistent, almost militaristic timpani beat in the orchestra. Fluctuating tempos, too many small retards, and sudden bursts of energy followed by sweetness cut the movement into segments. Theirs is a purple-patch rather than flow-through performance. Midori plays Fritz Kreisler’s cadenza here  and again she wallows, serving it up in chunks without shape or form. When the orchestra re-enters, the coda drags on (for seven minutes!) until the final four measures.

Midori’s tone and style fits better with the second movement’s Larghetto ease. It’s in ABA form. The brisk clip she takes in the second theme with pizzicato accompaniment is surprising; it doesn’t flow naturally from or into the A theme.

The flow in the last movement is more integral. Even the Kreisler cadenza moves along; Midori makes it one-of-a-piece with the rest of the movement, as if she’s finally leaving her mark on the concerto. What is deadening is Daniel Dodds, the Lucerne Festival Strings’s concertmaster, here as conductor. From start to finish the orchestra lacks transparency; it’s all violin melody with the rest of the instruments reduced to a homogenized mass of sound. Harmonies between instruments are not delineated, and Beethoven’s instrumental colors are so buried that I forgot there are trumpets in the orchestra until I listened to the superior performance with Christian Tetzlaff, Robin Ticciati, and the German Symphony Berlin on Ondine.

Violinist Lorenzo Gatto with Benjamin Levy and the Pelleas Chamber Orchestra on Zig Zag have the same pairing as on the Warner album. They’re almost as good as Tetzalff and Ticciati in the Concerto. In the Romances, their performances are superior to Midori’s. In No. 1, Gatto’s expressive range and sustained tension contrast with her unchanging tone colors. At first, her pulse seems business-like, whereas in the second theme she veritably prances. In Romance No. 2, Midori achieves a pleasant pulse and gait, but Dodds’s orchestra has no shaping, color, or character — it’s just a pastel presence — whereas Levy’s orchestra has so much presence that it seems to speak, energizing Gatto’s phrases with more expressive depth and color than Midori’s.

Gil French was concert editor of American Record Guide from 2005 to 2020. He has reviewed recordings and concerts since 1988. He also served as midday classical host in public radio from 1988 to 2003.

The virtuoso violinist, academic, and activist discusses the mysteries of making music.

The great violinist drained every ounce of emotion from Britten’s Violin Concerto in a triumphant appearance with the Marin Symphony.