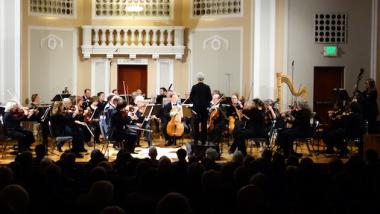 The bicentenary of the birth of Clara Wieck Schumann was just over a week ago (Friday the 13th), and the Mission Chamber Orchestra of San José celebrated it on Saturday, at the Hammer Theatre Center, with her Piano Concerto in A Minor, Op. 7. Adam Marks was soloist, and Music Director Emily Ray conducted.

This piece doesn’t get played very often. Its composer was not prolific, and if anything by her gets an airing, it’s usually the Piano Trio in G Minor, Op. 17, a mature work from her mid-20s. The concerto, dating from when she was still Wieck, before her marriage to Robert Schumann, is the work of a dazzling prodigy of a pianist who was still a young teen when she wrote it. Listening to it is a bit like listening to the violin concerto of young Alma Deutscher, which I heard a couple years ago. The hearer is impressed by the composer’s talent, but hopes that she will grow up fast.

The fast movements are full of fustian — declamatory statements pounded out in octaves. The best part of the composition is the way the first movement never arrives at a conclusion. It merely fades away, merging into the slow Romanze, which is a soft, ruminative movement almost entirely for solo piano. Only near the end does a solo cello (Garth Cummings in this performance) enter in. Then a couple quiet timpani rolls herald the transition to the finale, and it’s back to the declamatory races.

The best part of this performance was Adam Marks’s solo work. His command over the line of the music was ideal. He broke those declamatory statements into expressive phrases, bringing out meaning from the music as well as giving it charm and grace. The addition of some well-judged light ornamentation and rolls made his contribution complete.

The unfortunate part was the venue. Expelled, like many other San José musical groups, from its longtime home of the Trianon Theatre when the owners discontinued its use as a concert hall this year, the Mission orchestra has fetched up at the Hammer Theatre downtown. This is a drama theater, and its acoustics as a concert hall are rather deficient. I found that sitting up in the mezzanine, under the balcony overhang, gave better balance to the orchestra than on a previous visit when I’d sat below, at the cost of some muffling of the sound. But it didn’t help the piano, which came through with an extraordinarily dampened and clanging tone, like a honky-tonk dipped in a river. It was a poor tribute to the excellent work Marks was doing on the instrument.

Usually, a concert with Clara Schumann also features her husband Robert and their protégé Johannes Brahms. Not this one. The Mission orchestra is known for its imaginative and diverse programming, and this concert was a typical example. From famous composers, the offerings were obscure works. Beethoven’s Leonore Overture No. 1, much less played than the more dramatic No. 3, was energetic but light and airy, an unexpected sound in a Beethoven performance. Tchaikovsky was represented by three brief and diverse movements from the masterpiece among his obscurer orchestral works, the Suite No. 1 in D Minor, Op. 43. This was enough to make me long for a hearing of the whole suite.

The concert also featured two first performances. One was a Sinfonietta, subtitled “Parting,” by David Avshalomov, whose music the orchestra has played before. This grim but consonant work, one of several I’ve heard recently on the theme of climate change, depicts the catastrophe to come. In three movements, it begins with “Business as Usual,” turns to a memorial for the dying forests, and closes with the orchestra literally running out of breath, as the last breathable oxygen disappears from the atmosphere. This is apparently how Avshalomov thinks we’re going to go.

The first movement bustles. It’s earnest and urgent. The second, for strings only, is lyric and tragic, though not anywhere near as intense as its stated models, Mahler and Shostakovich. The finale is an odd piece of tiny separated phrases, sketchy and crabbed, and increasingly fragmented. If it sounds like anything familiar, it’s some of the strange late-period works of Carl Nielsen or Ralph Vaughan Williams.

To have this immediately followed by the Tchaikovsky — Ray said beforehand that if the audience didn’t clap as her musicians feigned unconsciousness, she’d just go straight on, but applause occurred — could have been audacious insouciance, but, played slowly and with heft, the Tchaikovsky came across as healing. Even if there is no healing after the events Avshalomov predicts, in music there can be.

The other new work was an Irish Dance Suite for strings by Quinn Mason, a young composer from Dallas. This work is similar to Gustav Holst’s St. Paul’s Suite, its stated model, in its crisp and lively energy, though, by contrast, it consists of Irish jigs, reels, and airs, plus original material in the same vein. The volunteer musicians struggled with rhythm and ensemble in this work, much more than they did in the Avshalomov, although intonation appeared to be less difficult. To be Holst-like, the music needed a rhythmic snap that it only intermittently got. The best parts were the melodic solos by concertmaster Geoff Noer, whose tone quality and sense of rhythm were capable of dealing with this material.

Mission Chamber Orchestra of San José plays all the music that fits, and then some, in its latest outing at Le Petit Trianon.

The top-tier flutist talks about taking up the baton and the mutual trust he enjoys with the musicians at his new gig.