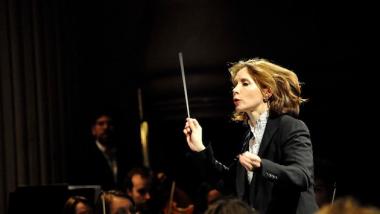 The Santa Rosa Symphony celebrated St. Valentine’s Day a few days early with a concert of music by Clara Wieck and Robert Schumann, whose stormy engagement and fruitful marriage was counterparted with the chaste sibling affection of Fanny and Felix Mendelssohn. Resourceful marketing, that, and a program of historical interest, fearlessly confronting the old question Why Were There No Great Woman Composers?

The answer, at least in the early 19th century, judging by this concert, is that young women were not encouraged to acquire the training that had produced Mozarts and Meyerbeers. Take Fanny Mendelssohn’s Overture in C, composed at 25, a year after the marriage (to William Hensel) that would relegate her to a predictable life of domesticity. Its best passages — “strokes” might be more accurate — recall those sudden insights that animate the early music of her famous brother, specifically his Overture to A Midsummer Night’s Dream, which the young siblings often performed four-hands at the piano. It is her only orchestral piece, but she only heard it twice — and perhaps wistfully recognized it could use revision.

Clara Wieck Schumann’s Concerto in A Minor is more promising stuff — and, like her husband’s much more familiar concerto in the same key, a piece that grew from an original single movement. In her case that became the finale, not the opener: she began it at the age of thirteen, already a piano student of the man she would subsequently marry, over her father’s objection.

Robert Schumann orchestrated that Concert Rondo, and then Clara composed the opening two movements which seem programmatic: the opening Allegro Maestoso eventful but irresolute, the following Romanza (for unaccompanied piano, ending with a long duo with solo cello) tenderly lyrical.

The piano writing is of course idiomatic and virtuosic: She wrote the concerto for her own performance, and she was said to be one of the greatest pianists of her day. Intricate passagework, powerful octaves, coloristic counter-melody informs the outer movements; the Romanza is emotional yet dignified. Sara Davis Buechner was the soloist in Santa Rosa, playing with power and, often, eccentricity, as if portraying the composer herself at the keyboard.

The second half of the concert settled into more conventional fare. Robert Schumann’s “Manfred” Overture was stormy, almost violent, yet mindful of the psychology of remorse that informs the program (and the composer’s own ultimate mental anguishes) in conductor Sarah Ioannides’s interpretation.

And Felix Mendelssohn’s Third Symphony, the “Scottish,” ended the evening with its Biedermeier travelogue, reminding the listener of the neoclassic Romanticism, thoughtful yet constrained, that seems so characteristic of the well-to-do Mendelssohns, and so beyond the reach of the socially marginal Schumann.

The orchestra did not sound impressive Monday night, not to a seat in the high balcony at the end of the hall — a seat that should profit from Weill Hall’s excellent acoustics. Timpani and trumpets were too loud, violins too soft, and inner voices often muddy and confused as to both intonation and rhythm. Some of this may be the result of Ioannides’s large, sweeping gestures; some to an overdependence on enthusiasm rather than care.

The  music was familiar, purposeful, and clear to anyone who listens to the 19th-century repertoire, but it does not play itself: it must be rehearsed with care and thoughtful listening. The music on the first half of the program, on the other hand, though often repetitive, was rambling and uncertain, and must be difficult for both conductor and orchestra to get hold of. If only ...

Conductor Francesco Lecce-Chong shows his stuff in symphonies from Mozart and Mahler.