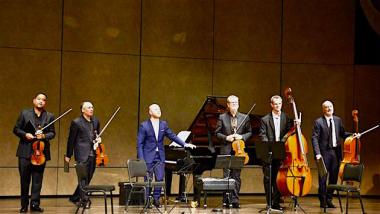 San Francisco has been quietly turning into a piano town. The annual “Flower Piano” at the Botanical Garden had its 5th iteration this year, and PianFrancisco has been deploying pianos at some unusual locations, most recently at Fort Point under the Golden Gate Bridge.

However, the most ambitious and farthest-reaching, not just geographically but also in terms of repertoires, has been the San Francisco International Piano Festival, which just concluded its 11-day long festival at the Herbst Theatre.

In its third iteration, the New Piano Collective, consisting of aluminae of the Eastman School of Music, led by Jeffrey LaDeur, extended invitations to new collaborators and guest artists, while presenting adventurous and far-reaching programs at various venues around the Bay Area.

For the final concert Sunday afternoon at the Herbst Theatre, the guests included San Francisco’s own Alexander Quartet, San Francisco Symphony’s principal double-bassist Scott Pingel, as well as mezzo-soprano Kindra Scharich. Particularly, the quartet and Pingel took on a prominent role for the chamber reductions of Mozart’s Piano Concerto No.13 in C Major, K.415 and Beethoven’s Piano Concerto No.4 in G Major, Op.58, as well as to accompany Scharich in Mozart’s concert aria “Ch’io mi scordi di te? … Non temer, amato bene” (Will I forget you? ... Fear not, beloved), K.505.

Festival Director Jeffrey LaDeur opened the afternoon program with the Mozart concerto, and ended with the Beethoven. The joyful character of the Mozart worked well with the intimate instrumentation with just 5 strings instead of an orchestra. Clear, articulate voices emanated from the violin section, answered by LaDeur’s deft playing, perhaps assisted by an unusual feature of the Steingraeber piano that simulates the actions of Mozart’s piano, creating a lighter touch more reminiscent of the period instruments.

Mozart primarily used the wind instruments for colors, so notes weren’t dropped or missed in the chamber arrangement. However, those of us used to performances with a full orchestra may have missed the dynamic range afforded by a larger ensemble. Yet, the precise timing with clear articulations, not physically possible with a larger ensemble, brought a sense of immediacy and directness that is rarely heard. Here, every nuance and every detail was audible, and the crystal-like transparency evoked a sensation of hearing the performance in a much more intimate venue.

With the Beethoven, however, the music demanded a broader dynamic range and a wider gamut of colors, not quite met with the small ensemble. The quartet and Pingel played valiantly, but their laser-sharp focus and tight ensemble still left me missing the wind players and timpani. Even so, LaDeur pulled another trick out of the hat in the pensive second movement, where he used the “sordino” or mute to bring out a sorrowful, ethereal atmosphere. Though favored by composers of the period, particularly Schubert, the feature eventually fell out of favor in the 19th century, in favor of more power for increasingly larger concert halls. Yet, LaDeur’s use of the feature helped cement the argument for more intimate performances, where subtlety and quiet elegance as well as tighter ensemble are emphasized.

The San Francisco mezzo-soprano Kindra Scharich, who has collaborated extensively with the Alexander Quartet, gave a lush reading of the aria, “Ch’io mi scordi di te.” With all five string players and piano, missing only three wind players in the original score, the ensemble rendered a rich sonority with much life. Scharich’s masterful control of the timbre gave great assurance to the dramatic emotions while the instrumentalists gave a solid foundation.

Pianists Albert Kim and Daria Rabotkina gave a lovable interpretation of Ma Mère l’Oye (My Mother Goose) by Ravel. However, it seemed as if all five movements were taken at nearly the same tempo, seemingly rendering the Pavane and “Le Jardin Féerique” (The fairy garden) unnecessarily hurried. Also, Rabotkina’s melodic lines were at times obscured in “Laideronnette, impératrice des pagodes” (Laideronnette, empress of the pagodas) and “Les entretiens de la belle et de la bête” (The conversation of beauty and the beast).

Keyboard Magic in Black and White

New Piano Collective’s second inaugural program ranged from the sublime to the silly.

Ten independent pianists band together to give your spirits a late summer lift.