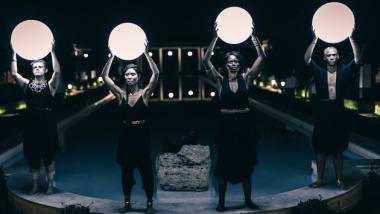 Katabasis Offers a Descent to the Classical Greek Underworld

The show actually opened in November, but on the ill-fated night when flames began to consume the mountains of Malibu. The complex production was canceled after only one performance. But last week, like the phoenix, katabasis rose from the ashes for four performances.

Katabasis (descent into the Underworld) takes the audience on a ritual walking journey through the realm of death — across the River Styx and beyond. In ancient Greece these mystery rites were designed to endow the participants (usually small private groups) with exclusive insights in order for them to navigate the afterlife and enlighten their remaining time on earth.

“We can reasonably conclude,” states the program, “that they involved music, travel, initiative rites, and performance reenactment … To that end, we have curated a selection of narratives and characters whose perspectives are most useful for our collective expedition.”

We gathered to become initiates to these mysteries, a rite of passage under the stars, through the gardens and the labyrinth of the Villa’s galleries, all in preparation for our inevitable journey into the underworld. Along the way we encountered a chorus of celebrating Bacchants; came before the three-headed dog Cerberus, who guards the gate to Hades; were urged to save a “coin for the ferryman, Charon”; observed poor, starving Tantalus straining for a mouthful of grapes; laboring Sisyphus and his massive stone; heard the rhapsodic song of the Naiads, and more, all accompanied by music, singing, dancing, masked ritual pageantry, and an abundance of fantasy.

For those that have yet to visit the Getty Villa, it is an exacting recreation of the Villa of the Papyri at Herculaneum (near modern-day Naples). It nestles in its own canyon on the easternmost fringe of Malibu.

Since its opening in 1974 the Getty Villa has housed one of the most significant collections of Greek, Roman, Cycladic, and Etruscan art in America, displayed in a setting that encourages visitors to depart from the reality of L.A.’s hustle, bustle and traffic, and travel back in time to another world. Stand on the balcony of the Villa looking beyond the arcaded gardens and fountain to the ocean (without a house or car to be seen), and you can feel yourself transported to classical Rome.

At night the Villa takes on an even more magical quality, though sadly, far fewer visitors ever have the chance to experience it.

Beckoned to follow by our silent, black-garbed guides, we began our journey heading toward the sounds of revelry. Our first encounter was with a band of free-spirited dancers and musicians immersed in a Dionysian celebration. “Cross the threshold,” they implore. “Seek the blessings from Persephone and find what has been lost.”

It soon became clear that each scene would have its own music, lyrics, movement patterns, and visual design components. A scene with the joyous accessibility of a folk song would fade away and lead to a group of musicians playing free jazz or atonal rhythmic improvisations. Philip Glass-style minimalism would give way to Broadway-style pop. It was fun, fascinating, and totally unpredictable.

The masterminds behind four larks are a pair of UCLA graduates who honed their craft in Oakland and then Australia before settling in Los Angeles — director/composer Mat Sweeney and designer Sebastian Peters-Lazaro. The show’s wide-ranging lyrics were co-written with Jesse Rasmussen. The costumes are by Mieko Romming, masks by Regan Baumgarten, and lighting by Brandon Baruch.

Each scene was performed by the 13-member ensemble in a different location, based on its mythological source. The moods and atmosphere constatly shifted. There were scenes of mystery and ritual, as we watched the spinning of the web of fate; the Danaids filling and emptying their leaking vessels to a minimalist theme that could have come from Einstein on the Beach.

There was also humor, most notably in the hunger pangs experienced by Tantalus (soprano Sharon Chohi Kim) and his/her nemesis (Lukas Papenfusscline) who kept dangling grapes just beyond her outstretched lips, all set to a clever patter song worthy of Gilbert and Sullivan. Our process of being judged worthy by the three-headed dog, Cerberus was like being picked out of the waiting line at Club 54: “Okay, you two. You three. Not you.”

The most beautiful moment by far came as we encountered Lethe, Goddess of the River (statuesque Sheila Brown Ellis) part woman, part tree, accompanied by her servants who entered carrying glowing orbs that reflected in the Villa’s peristyle fountain.

The show’s complexity — the logistics, the professional musicmaking (on a variety of instruments, ancient and modern), the stylizations of the choreography, accentuated by the fantasy of the costumes and masks — made katabasis a remarkable event.

Listen to the music for katabasis:

Salonen’s approach was particularly apt on a new work from Anna Thorvaldsdottir.