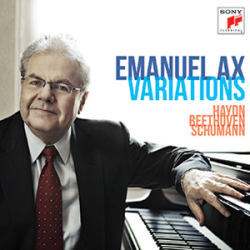 No Variations in the Brilliance of Emanuel Ax

For his Variations and Fugue, Op. 35, Beethoven chose a simple dance tune to which he developed a quaint attachment. He wrote this melody for his ballet The Creatures of Prometheus, used in a collection of contredanses, then as the subject of these piano variations, and finally as the variation theme in the finale of his Third Symphony, “Eroica.” Although the Variations were published in 1803, a year before the “Eroica” Symphony, they are now commonly known as the “Eroica” Variations.

This work is actually a double variation — that is to say, variations on two themes. An unusual feature here is that the first theme is nothing but the bass line of the contredanse tune, which appears later in the set as the second theme. Exceptional in their complexities and scope, these Variations offer the pianist tremendous possibilities for virtuosic display. In his performance, Ax combines rambunctious wit with irresistible lyricism and winning exuberance, navigating his way through the sundry events of this colossal work with relish and remarkable ease.

Haydn’s Variations in F Minor predate Beethoven’s Op. 35 by a decade. Written in 1793, this is also a set of variations on two themes, one in F minor and the other in F major. Initially it was conceived as the first movement of a sonata, but then the composer revised it as an independent piece with the subtitle Un piccolo Divertimento. These Variations were apparently a reflection on a heartbreaking event in Haydn’s life: a close friend of his, Marianne von Genzinger, died suddenly in January 1793 at the age of 38. Haydn completed this elaborate, exquisitely decorated dirge shortly afterward.

I don’t know whether Ax is aware of the historical and emotional background of the Variations — he doesn’t mention it in his liner notes. But he fully captures the spirit of the work, offering a probing, sorrowful, and elegant reading, enhanced by gentle rubato and swathed in layers of feathery ornaments.

The last set of variations on this recording, Schumann’s Symphonic Études Op. 13, is based on a theme written not by Schumann, and not even by a professional composer. The melody was penned by one Baron von Fricken, the (adoptive) father of Schumann’s fiancée at the time, Ernestine. Schumann immortalized Ernestine in his piano suite Carnaval Op. 9, where she appears as a carnival character, Estrella. One of the musical cryptograms embedded in the suite spells the name of Ernestine’s native town, Asch. (Soon afterward, Schumann broke off the engagement, but that’s another story.)

He fully captures the spirit of the work, offering a probing, sorrowful, and elegant reading.

Similarly to Beethoven’s “Eroica” Variations, the Symphonic Études grew out of a rather unremarkable theme, which proves again that in the art of variation it’s not the initial tune that matters but instead what the composer does with it. Despite its humble thematic origin, the Symphonic Études is one of the more amazing achievements of Romantic piano music. Schumann blazed a path for a new type of variation form — perhaps that was why he had trouble with the work’s nomenclature, finally naming it Études in the Form of Variations, though the previous title, Symphonic Études, remains more popular. In a way, the Études are also constructed as variations on two themes, even though the second theme does not emerge until the finale, which the composer added later. The new theme was taken from Heinrich Marschner’s opera Der Templer und die Jüdin.

The immense pianistic demands make the Symphonic Études one of Schumann’s most difficult works. Ax meets numerous virtuosic challenges with brilliance, poetic fervor, and deeply felt lyricism. The expanded range of tone colors, inspired by orchestral timbres, as well as by abrupt emotional contrasts, comes across compellingly in his stellar performance.

The CD was recorded at the Academy of Arts and Letters in New York City in 2012, and the quality of sound ideally matches the superb level of performance. This recital is one of Emanuel Ax’s finest accomplishments.