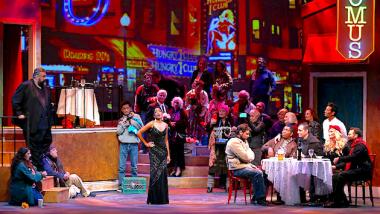 Director Igor Vieira used the modern setting to make his production relaxed and fun. The characters’ movements and interactions were natural, without the grandiose posturing that sometimes emerges in operatic tragedy. Colline and Schaunard were presented as a couple, emphasizing Marcello’s (and, later, Rodolfo’s) loneliness. A highlight of the staging came in Act IV when they jousted using rolling chairs for horses and umbrellas for lances. Their silly exuberance was infectious – perfect for a bunch of rowdy twenty-somethings trying to make it in the city. The characters’ relatability also made the second half of the opera especially devastating. (I cried more over this bohème than any other bohème I’ve seen.)

A few missed details marred an otherwise-superb show. Mistimed lighting cues, misaligned projections, mispronunciations, and ghastly Act IV makeup on Mimi should be easy to fix for future performances. The production also would have worked better if it had not overdone the San Francisco location to the point of parody. The celebratory parade for a Giants victory at the end of Act II was strangely disconnected from the text and from the rest of the act. The stage was crowded with stereotypical San Francisco staples: cross-dressing, tent encampments, “will code for food” signs. Choristers’ background business that was supposed to contribute to the atmosphere was instead badly acted and distracting.

Bay Area operagoers will not be surprised to read that soprano Julie Adams stole the show as Mimi. Her ringing sound filled the small Lucie Stern Theatre. But Adams has acting chops to go with her golden voice and ingenue looks. Her Mimi was playful and sunny, and also clearly very sick. Her voice dropped to a pained, husky whisper during Act IV. Kudos to West Bay for casting a Rodolfo who could keep up with her. Nathan Granner wowed with tons of squillo on his top notes, honey tone, and sensitive dynamic choices, especially during “Che gelida manina” (What a cold little hand). His angst-filled facial expressions tugged at the heartstrings.

In the pit, José Luis Moscovich kept the music moving briskly — an important consideration because a delayed start and gratuitous extra intermission (between Acts III and IV) made for a late night! The orchestra played well despite the logistical difficulties of being split across multiple levels. (All 26 instruments didn’t fit in the theater’s small pit.) I especially appreciated their punchy take on the Act II march and the sinuous flow of the strings in Mimi’s and Rodolfo’s Act III duet. Occasional struggles by the brass section did not detract from the orchestra’s impassioned delivery of Puccini’s score.

As a recent transplant to Palo Alto, I’m delighted to learn that opera of this quality is happening in my neighborhood. I’ll certainly be back for more.