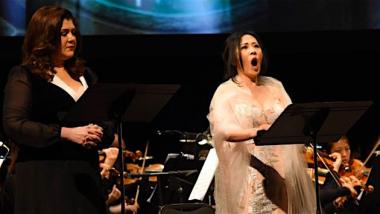 When a brand-new, small organization decides to make its debut with Wagner’s mighty Tristan und Isolde, it’s a surprise. The best you can do is to wish them luck and hope this boundless daring will work out somehow.

But wait. If you were in Herbst Theater Sunday afternoon and attended the Claude Heater Foundation’s concert production, you might have been shocked, rather than surprised.

This was not an OK performance — it was a wonderful event I would strongly recommend to anyone, if only this wasn’t the one and only show. So look for the next presentation, perhaps an unabridged Ring (no smiley here).

The greatest contribution to the grand event in Herbst was Jonathan Khuner’s pickup orchestra — 60 stalwart members of the “Freeway Philharmonic,” who played their hearts out and layed down a magic carpet of Wagner’s most affecting music. It was stunning how Khuner made every note of orchestra clear and present, but never stepped on the singers, who performed downstage, in front of both the orchestra and conductor. Among the many staged and concert performances of Tristan I have heard, this had the best balance by far.

From Natasha Makhijani as concertmaster to Laura Reynolds’s English horn solos, Tiantian Lan’s principal viola, Eric Sung and Leighton Fong leading the cellos, to the first-rate woodwinds and brass sections — everyone contributed to a magnificent sound.

On the stage — under Khuner’s and Dmitry Murashev’s informative supertitles and Naomi Kremer’s mostly abstract projections — the ruling figure was Juyeon Song.

The Korean soprano, a Bay Area resident, was responsible for establishing the foundation, creating the concert event, and above all, singing Isolde, which she did with unflagging energy throughout the incredibly demanding vocal marathon.

Her Tristan was Roy Cornelius Smith, a powerful tenor with a large, grainy sound reminiscent of Jon Vickers, and his voice turned lyrical exactly at the right time for the Act II love duet. The balance between the principals was just as impressive as the one between orchestra and singers. Whether enemies or lovers, this Tristan and this Isolde consistently supported each other in the music.

Tammy Calder — whose stage name is Tamara Gallo — was also production manager, in an unusual role for a singer, and it was her work that made the event run so smoothly.