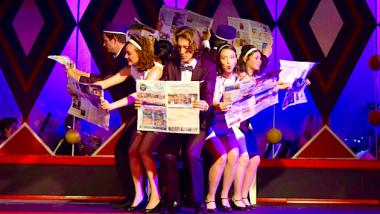 Pacific Opera Project Does It to Rossini's La Gazzetta

There once was an amusement park by the sea in Santa Monica called Pacific Ocean Park, popularly known as POP, where you went to have fun. That oasis has been gone for half-a-century, but now the region has another POP, Pacific Opera Project, where the emphasis also seems to be on fun — for the audience certainly and most likely the performers, too.  But they do have serious pretensions underneath the fun, and now and then, they come up with a real coup.

Indeed, on June 28, POP etched itself into operatic history by presenting the West Coast premiere, and only the second staging in the U.S., of an obscure Rossini comic opera, La gazzetta, ossia Il matrimonio per concorso (The newspaper, or the marriage contest). The piece was written in between The Barber of Seville and La Cenerentola and shares some music with both (Rossini was an inveterate recycler and self-borrower) but fell into total obscurity for nearly 150 years until Vienna Chamber Opera staged it in 1976. America didn’t see it until the New England Conservatory’s 2013 production, one which featured the world premiere of a newly discovered (2012) Act I Quintet that plugged a gaping hole in the score and action.

Given where it is on the Rossini timeline, I’d hoped that La gazzetta would be as consistently inspired as The Barber and Cenerentola. It’s not. But it does catch some of the bursts of genius that run through its predecessor and successor. There are ensembles where the Rossini crescendos fizz as effervescently as in anything he wrote, and most of the soloists get plenty of opportunities to show off their florid technique.

The plot is as airy a piece of fluff as you can imagine. A pompous, self-satisfied Neapolitan big shot, Don Pomponio (love that name), advertises in a Parisian newspaper for a husband for Lisetta, his spoiled, flighty daughter who is loved by a local hotel owner, Filippo. A rich, disillusioned playboy (Alberto) falls for a girl (Doralice) whom he thinks is the one in the ad. Confusion is rampant until they fix Pomponio’s wagon and everyone is satisfied in the end.

As a whole, there is enough there in La gazzetta to provide an evening of satisfying entertainment.  And it looked like a natural platform for the populists at POP to go mondo contemporary, but not so mondo as to rip holes in Rossini’s scheme.

We got the full-on renegade concert experience from POP this time as they set up shop in the small, vaulted-ceilinged, 1903-vintage Highland Park Ebell Club in the hills north of downtown Los Angeles. Seating consisted of mostly tables and chairs, with a small antipasto spread on each table, and the ticket price included a bottle of wine or other drinks. The very clever program was an actual newspaper — with a La gazzetta masthead, of course — with Don Pomponio’s ad occupying all of Page 3 (no photo of the girl, just Pomponio’s smug mug shot, which was perfect).

Josh Shaw, POP’s do-everything-and-anything artistic director, came up with a colorful, garishly-lit stage design that wrapped itself 90 degrees in front of the tables, taking shrewd advantage of the narrow space. Everything took place in the Parisian hotel lobby with a full bar on the left and concierge desk on the right. Judging from the costumes and hairdos, I would place this update somewhere around 1965 — that is, when the cast wasn’t masquerading as Quakers, Turks, etc. as per Rossini.

The ensemble cast is young, high-spirited, and just this side of over-the-top. The most arresting performer was Rachel Policar (Lisetta) who, once the flutter in her lyric soprano evened out, could sail through the most challenging coloratura lines, even when being lifted on high in contorted positions by the male choristers. Others included the bumbling Pomponio of E. Scott Levin, the somewhat nasal tenor of Kyle Patterson’s Alberto, Molly Clementz’s full-blooded mezzo as Doralice and baritone Armando Contreras’s solid Filippo.

For economy’s sake, the orchestra was a mostly competent, sometimes wheezy 10-piece ensemble directed by Brooke deRosa, who also made her own nifty reduction of the score for this group. Zach Neufeld contributed harpsichord continuo on a Casio keyboard from a nook way to the right of everyone. The overture was a cut-down version of La gazzetta’s curtain-raiser that later became the Cenerentola overture. The Quintet — which contains a reworked excerpt from the great Act I finale of The Barber — fits so smoothly into Rossini’s scheme that its absence must have been one of the reasons why La gazzetta had been neglected until recently.

The production looked as silly, as scrambling, and as lively as a silly Rossini opera ought to be, with a lot of unison kicks, dance movements, swivels on the bar stools, and other funny variations on the theme. The English supertitles — in Shaw’s adaptation — were more restrained than I thought they would be. But there were delicious passages like Lisette’s “I live for fashion and for pleasure. Get used to it!” or the anachronistic blurt, “Fake news!”

Yes indeed, the whole thing was a lot of fun, and it continues at the Ebell Club July 6 and 7. POP’s website says it’s sold out, but there is a waiting list.

Pacific Opera Project has a unique menu for success.

Two Musical Walks Through Art Galleries With the LA Phil