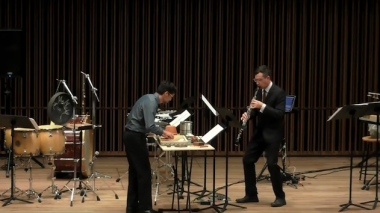 It’s not often that you get to hear oboe and English horn in a solo recital. They have familiar solos in the orchestral repertoire, but it’s a tricky instrument to perform on and poses a challenge in large concert hall settings.

Friday evening marked double-reed virtuoso Kyle Bruckmann’s first recital in the beautiful, intimate Ann E. Pitzer Center on the campus of UC Davis. Joined by percussionist Chris Froh, Bruckmann exhibited mastery in a concert of music composed after 1985. The audience confronted a peculiar stage set up, which was bursting at the seams with percussion equipment, with Bruckmann and Froh nestled within the neat arrangement. This odd recital of music for oboe, English horn, percussion, and electronics rose to exciting heights with the duo turning in high-voltage performances.

Prior to Liza Lim’s Ming Qi, Bruckmann spoke to the audience about how Lim’s music is intimidating to performers, including himself. He mentioned the complexity of her music and the heightened meticulousness of her writing. Indeed, following the concert, he shared the sheet music with several of the audience members so they could see for themselves just how hard the music is to perform. Still, Bruckmann delivered it with the highest degree of accuracy. The intensity he brought to the introduction, complete with difficult extended techniques and fast, challenging writing was exciting. Though a brief piece, Bruckmann’s composure captivated the audience. Not once did Bruckmann slip up on what was probably the most strenuous piece in the concert.

Given a performer of Bruckmann’s comprehensive skill and knowledge, his own compositions, unsurprisingly, held their own. He flexed his composer chops with two original compositions, one of which was a world premiere. In Parralax Errors, he displayed his unwavering command over extended techniques on the English horn, often playing without a reed. While at times the electronics seemed strange and distracted from the rhythmic interplay between the English horn and mixed percussion, Bruckmann’s composition played to his strengths and his “jack of all trades” performance practice.

As the concert approached the final selection, Bruckmann took the opportunity to explain why he chose such an adventurous and monstrously demanding program. He wanted to design the concert as a way of showing the intersection of culture, art, and opinions — things that he says echo in his personal life.

Du Yun’s Piece for Oboe and Tam consummated the entire concert’s strengths and was the highlight of the night. This piece gave the audience a comprehensive appreciation for Bruckmann’s skill and the impressive breadth of sound he could draw out of his instruments. He played with exceptional refinement and clear tone throughout and flashed his agility in the more technical passages. This is a real show-stopper of a piece for the oboe.

Perhaps the most impressive aspect of the performance was the complete synchronization between Bruckmann and Froh. On the four pieces where the two performed together, their timing and articulations were expertly managed. You would expect the dynamic balance of oboe and large percussion to prove the most demanding aspect of this collaboration, but Bruckmann and Froh struck a remarkable balance between volume and clarity. Not once was the performance overwhelmingly loud, nor did I ever struggle to hear either performer. To say that this accomplished duo shined on their Pitzer Center debut would be an understatement.

The local power violin-piano duo explores contemporary music in a way that everyone should celebrate.

The Baroque Oboe, in Spades