Where has Anna Prohaska been all my life? That’s what I asked myself as story after story unfolded in vivid detail on the soprano’s latest song recital, Paradise Lost (Alpha 581). Together with the ever insightful pianist, Julius Drake, who is totally in tune with her approach — it may very well be “their approach” — the German-born Prohaska presents 26 songs in four languages that explore what album commentator Benedikt Von Bernstorff calls the “mythical narrative” of Paradise, the creation of Adam and Eve, and what has become of God’s earthly kingdom since a bite into one sweet little apple released a huge can of worms. 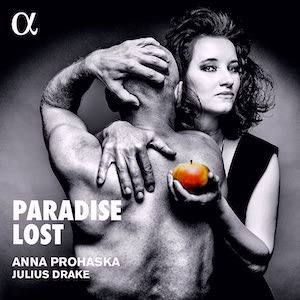 Much of the repertoire is rarely presented in the United States save for programs from the New York Festival of Song and the occasional visionary song recitalist. If the sheer variety of musical expression from 20 different composers gives cause for celebration, so do Prohaska’s beauty of voice, uncommon versatility, and ability to fully express the meaning behind words and notes.

The album concept more or less works and even when it doesn’t, the music does. And the recording itself — which is extremely clear, open, and airy (especially in high-resolution file format) — is a joy to listen to.

The program’s first two songs show the soprano summoning forth her early music skills. In the Ravel, she sings with a straight, clear tone that expresses both the pure and untainted beauty of Paradise and the underlying sadness of someone whose lover has gone off to battle. Then she lightens her voice to skip all over the place in the Bernstein, while occasionally making charming bird sounds. Prohaska’s English may be heavily accented — following the included lyrics helps in the Bernstein — but her French, to these admittedly Anglo ears, is more idiomatic and easily understood.

Next come the rarefied beauties of “Paradis” from Gabriel Fauré’s La Chanson d’Éve. As Prohaska sings of Eve’s first day on earth, she and Drake build tension and excitement with a subtle mastery possessed only by the finest exponents of art song. This is a gorgeous performance, one of many.

One of the soprano’s only limitations, the need to sometimes push a bit on exposed notes above the staff, emerges but a few times on the recital. On Debussy’s ultra-effusive “Apparition,” requisite lightness cedes to audible effort as Prohaska tackles the high A and then the difficult jump to high C. A brief check of other renditions of the song reveals singers as diverse as Renée Fleming, Arleen Auger, Sandrine Piau, and Pierrette Alarie having an easier time of it, sometimes by extending the C long enough to allow it to spin naturally.

Most of the time, however, Prohaska’s ventures into her high range are a joy. She’s fabulous as she ascends the scale in “Air du feu” (Song of fire) from Ravel’s L’Enfant et les Sortilèges (The child and the spells), and negotiates the high tessitura of Wolf’s delightful “Die Spröde” with aplomb and absolute dynamic control. In fact, many of her interpretations are so convincing that it’s difficult to temper admiration: she’s wonderful in Daniel-Lesur’s “Ce q’Adam dit à Ève” (What Adam said to Eve), remarkably versatile in Britten’s “A Poison Tree,” sprightly and teasing in Hans Pfitzner’s “Röschen biß den Apfel an” (Rosie bit into the apple), passionate and dramatic in her rendering of Schubert’s “Auflösung” (Dissolution), and alive to the underlying meanings of Schumann’s “Warte, warte wilder Schiffmann” (Wait, wait, wild seaman).

She nails the hollow low note on the word “hell” in Eisler’s “Diese Stadt hat mich belehrt” (This town has taught me) in a manner that drives the song home, and expresses the despair and desperation of Mahler’s “Das irdische Leben” with an intense identification that brings to mind performances by the great mezzo-soprano Christa Ludwig.

Paradise Lost is a daring recital from a superb soprano and pianist who use every means within their considerable powers to enter fully into song after song and story after story. Prohaska is certainly one of the finest and most perceptive song exponents of our troubled times.

Dido and Cleopatra are warp and woof of an entertaining recital of Baroque gems.