PBO’s Saul Is a Perfect Fit for Nicholas McGegan

Nicholas McGegan may no longer be the artistic director of Philharmonia Baroque Orchestra, but the record of McGegan’s inimitable touch — unmistakable, in the case of Handel’s Saul — remains to savor. Everything about his artistry, including the buoyant and sprightly tempos, sly humor, deep reverence for beauty, and capacity for sincere emotional expression come through on this, his final live recording with PBO. 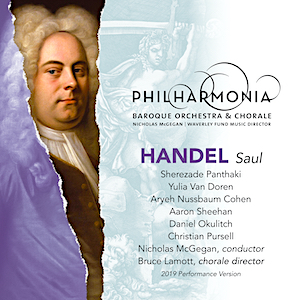 Although Saul’s covers and liner notes shockingly fail to give him credit, the recording was superbly produced, recorded, edited, mixed,  and mastered by PBO’s former recording engineer, David v.R. Bowles of Swineshead Productions, LLC. Set down in Berkeley’s First Congregational Church in April, 2019, this digital-only release shows the Philharmonia Baroque Orchestra and Philharmonia Chorale, under Bruce Lamott, in fine form. Auditioned in 24/192 high-resolution, Bowles’s achievement captures all the nuance and color that were transmitted by First Congregational’s uniquely live, resonant, and spacious acoustic, and leaves me deeply regretting both his departure and that of his husband, McGegan.

Lamott, who authored the liner notes (curiously printed in capital letters, perhaps to aid the aging eyes of PBO patrons), wastes no time telling us what he thinks of the libretto Charles Jennens fashioned for Handel’s 1739 oratorio. “The Book of First Samuel becomes a page-turner from the moment Saul is introduced as ‘the handsomest man in Israel, standing head and shoulders above the rest’ to his ignominious death in battle, a failed suicide finished off by an enemy soldier,” Lamott writes. “The story of the rise and fall of Saul is fraught with drama: violence, madness, mayhem, and sorcery as well as jealousy, love, and the most undeniable description of bisexual devotion to be found in the Hebrew Bible.” That’s a polite way of saying that, in McGegan’s hands, the tale’s over-the-top soap opera elements get played for all they’re worth.

There are so many touches to savor, both in the instrumental accents and the phrasing of McGegan’s fine crop of soloists. PBO’s cast ensures that all but the most inattentive of listeners will get the dialogue. And when the story, despite its ludicrous elements, reaches its tragic outcome, orchestra and chorus convey emotion as though the silliness that preceded it matters not. The forthright singing of the chorale’s tenors identifies them as American, but the way the choristers blend with soloists and orchestra demonstrates Lamott and McGegan’s concern for balance and detail.

The cast is quite fine. Bass-baritone Daniel Okulitch may not be the most earthshaking Saul on record, but his instrument’s sonorous authority is apt for the part except when it fails to express just how nuts Saul can be. Soprano Yulia Van Doren (Merab, Saul’s daughter) is a delectable joy in her light upper range, and her ability to convey fetching innocence provides a fine contrast to the more rooted sound of soprano Sherezade Panthaki (Michal, Saul’s other daughter). Both women occasionally gasp for breath between long spun, high-flying coloratura phrases — there is also the occasional yelp, especially from Panthaki — but whenever things slow down even a bit, their singing is heavenly. Besides, a tinge of scream is all in keeping with the most screaming elements of this sometimes off-the-rails show.

Most touching are tenor Aaron Sheehan’s beautifully sung Jonathan and countertenor Aryeh Nussbaum Cohen’s equally sympathetic David. One can only wonder what would have happened between these boys had not women entered the picture. Having said that, David and Michal’s superbly sung duet, “O Fairest of Ten Thousand Fair,” is one of the performance’s many highlights. Sheehan’s voice may be better equipped for conveying moving sincerity than anger, but sincerity is just what this oratorio needs. Bass-baritone Christian Pursell is excellent playing both the prophet Samuel and Doeg, and tenor Jonathan Smucker is equally fine in his three smaller roles.

The recording is available on various streaming/download services, including Qobuz, Amazon, and others. If you download or stream this recording and discover yourself without libretto, biographies, and Lamott’s introduction, you can find them at philharmonia.org/saul., Make sure to access them because they’ll help you understand just how wonderful this performance is. There are many times when the sound and music are so captivating that you may find yourself closing your eyes as your relish their beauties.

Nicholas McGegan’s “Retirement” Would Exhaust a Gaggle of Young Conductors

PBO’s longtime leading light shares his boundless energy with other ensembles around the globe.