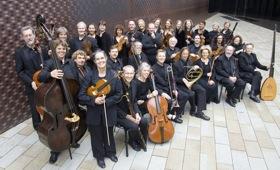 Jonathan Rhodes Lee on November 9, 2009
“Poetry and painting have arrived to their perfection in our own country; music is yet but in its nonage, a forward Child, which gives hope of what it may be hereafter in England, when the masters of it shall find more Encouragement.”

With these words from the dedication to his Dioclesian, Henry Purcell invited future Englishmen to claim him as founder of a modern musical tradition.

Indeed, even in the 20th century, composers like Edward Elgar and Benjamin Britten were being understood in comparison with their 17th-century progenitor. In 2010, the English are still nuts about Purcell, and the 350th anniversary of his birth is cause for a major celebration.

Those who heard Philharmonia Baroque Orchestra’s all-Purcell performance this weekend might want to extend the composer’s cult to this side of the pond. Given the wealth of invention in this sadly underperformed music, it’s easy to understand why. Sure, we were treated to Dido and Aeneas, Purcell's justifiably celebrated tale of heartbreak and demise, but we were also wowed by lesser-known works, highlighting Purcell’s tortured, chromatic counterpoint, his dramatic instrumental writing, the imagination in his traditional verse anthems for chorus and soloists — all in a first half that threatened to overshadow the star of the hour, mezzo-soprano Susan Graham, who joined the orchestra as Dido for the second-half rendition of the miniature opera.

The first sounds that we heard Sunday evening came from baritone soloist William Berger in the verse anthem, O Sing Unto the Lord a New Song — and what dulcet sounds they were. I’d never before heard Berger sing, but hope that he returns to sing with our premiere Baroque ensemble. Capable of balancing dramatic flair with suave vocal production, able to harness room-vibrating power when needed but also to move rapid passagework throughout his range with elegant agility, Berger is a gem of a singer, surely equal in ability to Purcell’s own favorite baritone, John Gostling.

Following the opening anthem, the band treated us to the Chacony in G Minor, a French-style piece that they tossed off with their usual panache. Hear My Prayer, O Lord, an incredibly emotional, dense work, for eight-part chorus followed. The Philharmonia Chorale presented this intensely personal lament with close attention to detail and spine-tingling beauty of intonation. In fact, the chorale has never sounded so enthusiastic as they did during this set; clearly, this was music that they loved to sing. From the sobriety of Hear My Prayer to the goofy cackling “Ho ho hos” of the witches’ choruses in Dido, the chorus proved itself an able, flexible, and indispensable vocal performer.

The other vocal soloists on Sunday assumed multiple roles as the evening progressed. Céline Ricci was featured in a single song from Purcell’s music to Aphra Behn’s stage play titled Abdelazer. Ricci is becoming a regular on PBO's singer lineup, and the audience seemed delighted by her silvery sound and unpretentious presentational style. I must admit, however, that I have yet to warm to her charms. Her singing, to my taste, was a bit straitlaced, without a great deal of interpretive savvy, and was occasionally sloppy (especially in declamation). She and McGegan seemed to be aiming for comic effect with her presentation, complete with some extrovert eye-batting from Ricci at the conclusion of the aria. Yet, nothing in the aria’s text justified this lampooned approach, and, with no context to explain it, I was left wondering what was so funny. It would have been best to hold off with the comedy until Ricci assumed the role of the second witch, where her penchant for goofball gestures and facial expressions were a bonus.

For Dido, the singers were all at their best. Berger's Aeneas was heart-wrenchingly sympathetic; only Dido would have been able to dismiss his plaintive sounds as “crocodile tears.” Jill Grove was brilliant — frightening and funny at the same time — as the evil Sorceress, irritated with the bumbling idiocy of her minions, which is how Ricci and Cyndia Sieden played those endless melismatic passages for the cackling witches. Sieden was also an effective Belinda, playing the naive part with an earnestness that made Dido’s downfall all the more poignant.

And then there was Susan Graham. Readers may have turned to this review hoping to read about the star of the evening, but, if you know Graham’s singing, you know what her performance was like. She settled into the magisterial role quite comfortably, queen over all around her in stature, appearance, vocal power, and finesse. Her polish and confidence worked together to produce her signature stage presence, and it was hard to imagine anyone more suited to that role.

But, as wonderful as she was, the evening was decidedly not about Susan Graham. It was a program of glorious music by Britain’s favorite native-born son, presented by one of the world’s great period instrument groups. When Dido urged us to remember her, the sentiment was surely superfluous. Sunday’s concert was hardly an event that we were apt to forget.