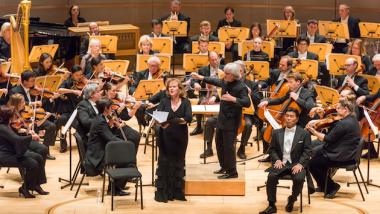 In 1990, Carl St. Clair took over as principal conductor and music director of Orange County’s Pacific Symphony, an organization (a bit like Rodney Dangerfield) that has struggled to get respect while operating in the shadow of the Los Angeles Philharmonic.

The orchestra’s recognition took a big step forward on Sept. 15, 2006 when it moved into its own lavish facility, the Renée and Henry Segerstrom Concert Hall. To celebrate the event, the orchestra commissioned a major work for vocal soloists, chorus, and orchestra from Philip Glass, The Passion of Ramakrishna.

Last Thursday The Passion of Ramakrishna was given an illuminating revival performance in preparation for the Pacific Symphony’s upcoming debut at Carnegie Hall on April 21. The concert will be part of Glass’s 80th birthday celebration and highlights his long, creative relationship with Ravi Shankar.

In its announcement of the invitation, Clive Gillinson, executive and artistic director of Carnegie Hall, wrote, “In creating our season-long residency with Philip Glass, we saw a great opportunity to ask orchestras from across the country to suggest programs that put his symphonic works in illuminating context. Pacific Symphony’s program stood out as one of the most compelling, and we were further impressed by the orchestra’s strong commitment to performing and recording Philip’s works.”

Thursday’s concert offered a preview of the Carnegie Hall program. It featured “Meetings Along the Edge” (based on a theme by Ravi Shankar), from the movie Passages; Ravi Shankar’s Sitar Concerto No. 3, its solo part performed by his daughter, Anoushka; and ended with The Passion of Ramakrishna.

Excitement built up even before the concert started, with brightly costumed Indian musicians, singers, and dancers performing outside in the Argyros Plaza and in the lobby of the hall. When the concert did start, St. Clair practically danced onto the podium.

“Meetings Along the Edge” established the East/West musical crossover influence that would dominate the program. A brief excerpt from his score for the movie, it illustrated Glass’s long-held interest in classical Indian music by integrating a theme by Shankar into the work. It also served as a brief homage to the man that Glass equates with Nadia Boulanger as a key influence in shaping his musical and spiritual consciousness.

Shakar’s Sitar Concerto No. 3 (in three movements with an introduction) is a work that intertwines classical Indian ragas with an orchestration that is so traditionally western and British it sounds like Vaughan-Williams. It is a gentle, exceedingly pleasant work, with the sitar (played with virtuosity by Anoushka) providing the contrasting atmosphere of Indian exoticism. The first two movements are both quiet in tone with the harp and flute flying above and sharing lines with the sitar. In the final movement, the music is infused with the energy of a rapid-fire dialogue of the type traditionally entered into by the sitar and tablas. As an encore Shankar performed a brief work of her own, Monsoon.

The Passion of Ramakrishna holds a significant place in Glass’s catalogue. It’s subject and large orchestra/ vocal format follows in the tradition of his biographical operas as it depicts the final days in the life of the 19th-century mystic and yogi who died in 1886.

In his program notes for the world premiere, Glass wrote, “It would be hard to underestimate the impact that the life, presence and teaching of Sri Ramakrishna had on the formation of the modern India we know today.”

The work is composed in four parts with a prologue and epilogue. Because Glass felt that Ramakrishna’s consciousness transcended gender, his words are spoken by the chorus, in this case the Pacific Chorale under the direction of Robert Istad. The character of his wife, Sarada Devi was sung by Elissa Johnston; his primary acolyte, “M,” was sung by Christópheren Nomura, Dr. Sarkar by Donovan Singletary, with I-Chin Feinblatt as the First Devotee.

The 46-minute oratorio/passion draws its text from a variety of sources, from classical Hindu poetry to the master’s words to an almost documentary account of his final moments. It begins with an evocation of the Goddess Kali, to whom the mystic felt a direct connection.

Part 1, “The Master’s Vision” establishes the central message as the chorus sings, “God can be seen. One can talk to him as I am talking to you now.”

Part 2 delves into the lifelong (celibate) relationship the yogi had with his wife, Sarada Devi, who was chosen for him at the age of 5. “He taught me everything,” she sings. “I always used to feel as if a pitcher full of bliss was placed in my heart.”

In the tradition of other great “passions,” the work depicts the central figure’s final days, his suffering (Ramakrishna died at the age of 50 from throat cancer), and his transition to a state of grace and entry into the next sphere of being. A detailed account of that moment occurs in Part 4 in an aria that was beautifully sung by Nomura.

The Passion of Ramakrishna includes some of Glass’s most luminous writing for the chorus in unison and in contrasting sections. It is a work Glass clearly immersed himself in, musically and philosophically. That power came through brilliantly in the performance. Hopefully, its New York performance will gain the Pacific Symphony some well-deserved respect.

It’s definitely worth the trip to see Glass’ version of Beauty and the Beast ruffle the grace of Cocteau’s imagery.