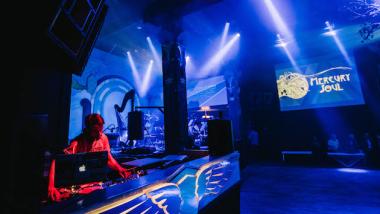 The Potential of a Mercurial Soul

Friday night, a little before 9 p.m., a handful of people waited in a newly formed line outside the Great Northern, peering into the club to see the soundcheck we could hear wafting out of the multistory painted black doors. Bouncers adjusted large outdoor panels out on the sidewalk where a cadre of smokers continuously filtered in and out. Already there were plenty of cues that the event, organized by Mercury Soul, was not going to be a typical classical music concert.

We started filing in around 9:15 and most headed for the bar. The interior of the club was cozily sized with two stages for instrumentalists and a large table where DJ Justin Reed played the first pre-set: a mix of calm electronic dance music (EDM), occasional Latin rhythms, and sampled percussion instruments. Behind the main stage, Mark Johns projected kaleidoscoping, art-deco-inspired images in a rainbow of colors and on the perpendicular wall, a series of artistic renderings of people and places south of the border (with an occasional image of “resiste” graffitied on a wall).

By the time the first set started around 9:45, the DJ had stepped up the volume level several times and the driving beat was equally sonic and haptic. After a transition where both DJ and instrumentalists played together, the Redwood Tango Ensemble and Friction Quartet performed works by Julian Peralta, Daniel Ruggiero, Heitor Villa-Lobos, and Severiano Briseño. Between the still-arriving audience, rather uniform performances, and pieces poorly adapted for the space, the first set was just miked acoustic musicians playing underperformed pieces in an unusual venue to a curious and chatty audience.

It was DJ Masonic (alter ego of composer Mason Bates) who ignited the potential of the evening. In his set, the instruments did more than simply add timbral warmth and rhythmically static, arpeggiated harmonies. He incorporated more interesting, complex rhythmic figures and harmonies that played off those rhythmic devices. Bates’s segment approached real integration of performing forces, the space, and the sound system, and took advantage of the more informal mood of the standing audience. After the earlier set featuring dance rhythms failed to elicit physical movement in the audience, Bates got a third of the crowd swaying and dancing. The conclusion of his set garnered a loudly shouted “that was so cool!” amid the applause.

Astor Piazzolla ruled the second set with performances of Libertango and the first movement of his Bandoneon Concerto. By this time (around 10:30), the pleasantly louder, larger audience was expectant. The Libertango in particular, with spectacular playing from the wind players, was engaging. Jamael Smith’s virtuosic solo bassoon work and confident energy at moments of transition brought cheers from the audience. It seemed from the hand-drawn sketches on the percussionists’ iPads that they had adjusted and adapted their parts to ensure tight ensemble work.

The diverse crowd of equally curious classical and EDM folks made for exciting fashion sightings, from the latest hip styles to white-haired, suspendered, glasses-with-neck-strap-wearing folks — with everyone dancing. People were free to choose their own variety of engagement over the course of the evening: people talked, checked email, posted to Facebook, or gathered attentively around the instrumentalists’ stages.

Over the evening, the DJ stepped up the decibel levels as more people filled the space to hear a dance by Arturo Márquez, another set by DJ Masonic, the eclectic artistry of Rob Garza and afterparty music from Holmar and Galen. In all, it was over five hours of art that offered plenty of justification to be there the whole time. How many concerts can claim that?

Mercury Soul has brought together a collection of ingredients capable of something greater: amazing sound design capable of handling a diverse range of acoustic and electronic demands, willing performers skillful at adapting pieces to unique spaces, and DJs with the know-how and desire to collaborate with classically-trained musicians. The proof of the concept and execution was in the large, energetic audience. I hope Mercury Soul and other adventurous groups continue to take risks and experiment with this potential. There is room here: room to enjoy, room to be more human, room to make a new music.

Mercury Soul Is Caught in the Act

The Baroque & Beats program at the DNA Lounge had fans grooving to a mix of classical music and electronic dance music, and we have photos to prove it.