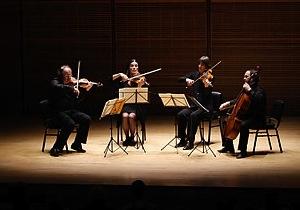 The Austria-based Quatuor Mosaïques derived its name from the mosaics that adorn the Basilica di San Marco in Venice. Seen from up close, these works of stone-art offer myriad details for the viewer to appreciate. From a distance, larger images emerge, the detailed work culminating in one cohesive whole. The members of the ensemble saw something similar in the string quartet: the study and nuanced approaches of the individual musicians must somehow congeal, to make an understandable whole for the audience. This period-instrument ensemble accomplished this aim — and more — with great aplomb in its concert for Cal Performances Sunday night in Berkeley’s First Congregational Church.

For this set, the ensemble chose to perform quartets with nicknames. The concert opened with a work by the father of the string quartet, Joseph Haydn, the so-called “Sunrise” Quartet in B-flat major (Op. 76, No. 4); the work’s moniker comes from the arch-shaped phrases with which it opens. They followed this with Mendelssohn’s Opus 13, “Ist es Wahr,” which takes its name from the song that Mendelssohn wove throughout the quartet. The group closed with the “Rosamunde” Quartet by Schubert (Op. 29, No. 1), so named because, like Mendelssohn, Schubert quoted one of his own tunes in this work’s second movement.

To choose “named” quartets was more than mere cleverness in programming. The string quartet is one of the most intimate chamber music genres. Denied the flamboyant tools of the symphony orchestra, singers, or even a solo keyboard, a quartet demands a certain discipline and clarity of thought from composers. It’s hardly a surprise that, by the time Beethoven was writing his late string quartets, that composer was obsessive about their reception. Nor is it surprising that audiences routinely apply little sobriquets (and legendary stories) to these works, in an effort to bind them forever to their composers — and to themselves.

Modern quartets can’t quite achieve the fleetness and transparency that the Quatuor Mosaïques managed in these passages.

The “Sunrise” Quartet is “Papa” Haydn at the peak of his jovial, flexible powers, written when he was 65. He uses a dazzling array of compositional techniques in this work, ranging from clear thematic form in the first movement to peasant-inspired writing in the third. Quatuor Mosaïques clearly relished this rustic minuet, emphasizing its weirdest qualities to great effect. This movement’s trio asks the lower instruments to create a drone while the fiddles meander expressively, before all the instruments join in bizarre parallel octaves that punctuate not only pleasing homophony but also denser imitative writing. The following finale is Haydn at his wittiest. Supposedly based on a folk song that Haydn brought home with him from London (one of those countless “quartet legends”), this two-part movement contrasts sturm und drang intensity in B-flat minor with sparkling variations on the theme in B-flat major. The ensemble’s response to the effervescent finale was breathlessly exciting, played at breakneck speed and tossed off with wry nonchalance.

Equally satisfying was the group’s approach to Mendelssohn’s “Ist es Wahr.” If the Haydn selection was the work of a seasoned master, Mendelssohn’s was the product of unquestionable youthful genius. The composer was just 18 when he composed this quartet. Surely his youth has more to do with the legend that has been attached to the work than anything inherent; Mendelssohn was inspired, the story goes, to write a song on the poem “Ist es Wahr” by a fleeting love affair the year before composing the quartet. So few details about this purported inspiration have come down to posterity that I have always tended to regard the story as apocryphal, but it shows, once again, how desperately we want to connect this music to the composers’ inner lives.

The Quatuor Mosaïques offers the best experience that one could hope to have at a string quartet concert.

Fine — there is, indeed, something inexplicably personal and intimate about this work. But we may as well marvel at Mendelssohn’s youthful mastery of his models as wallow in his tragically short, passionate life. The quartet is distinctly Beethovenian in conception, with a cyclic use of the original song theme. It’s quoted not only at the beginning of the quartet, but also, most recognizably, in the heart-wrenching Adagio second movement. This movement opens with the quoted material before launching into a severe central fugue, reminding us that Mendelssohn was one of Bach’s champions in the 19th century.

It was in this contrapuntal play that the Quatuor Mosaïques’ use of period strings had its greatest effect. Mendelssohn may not be chiefly known as a contrapuntist, but the clarity with which this ensemble was able to shape these independent parts, and somehow wrest the tortured chromaticisms of this fugue into a cohesive whole, was admirable. Their use of gut strings and lighter bows was also effective in the work’s third movement (marked “intermezzo”), in which Mendelssohn composed the type of featherweight “fairy music” that is one of his hallmarks. Modern quartets can’t quite achieve the fleetness and transparency that the Quatuor Mosaïques managed in these passages.

The concert ended with Schubert’s “Rosamunde” quartet, which uses a melody from Schubert’s incidental music to a failed play by Wilhelmine von Chezy. The play may have flopped, yet the music is sublime; written just a year before the composer’s untimely death, when he was mired in poverty, this work is Schubert at his most profound. The performers masterfully rendered the massive work, which comprised the entire second half of their program. They effectively responded to its rapid changes of mood, and pushed their instruments to their very limits — another effect that sometimes gets lost on beefier modern incarnations of the violin family.

The Quatuor Mosaïques offers the best experience that one could hope to have at a string quartet concert. Its members have played together for more than 25 years, so they understand the medium deeply. Their programming provided a satisfying overview of one of the more expressive periods in history of quartets, and their masterful technique on period strings allowed tiny details to bubble up to the surface that might be lost in other groups’ performances. This ensemble delivered, with obvious élan, exactly what its name promised.