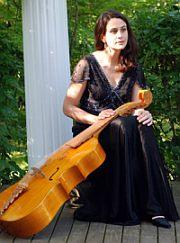 A Rare Treat From a Treble Duo

Jonathan Rhodes Lee on April 20, 2009
You don't very often encounter ensembles specializing in music of the French salon. Even more rarely do you get to hear a pardessus de viol duo. Put those two conditions together and you've got the Catacoustic Consort, whose debut on the San Francisco Early Music Society's concert series (heard Saturday at St. John's Presbyterian Church in Berkeley) must have been one of the more unusual experiences of this Bay Area concert season.

The instruments, to begin with, are not things you routinely encounter in concerts, even in the Bay Area. The pardessus is a really tiny viola da gamba. It is, in fact, around the size of a violin, and plays in approximately the same range. The instrument was a favorite among the ladies of the French salons, hotbeds of discourse on political, artistic, and social topics throughout the 18th century. These well-bred ladies (for it was, indeed, women who primarily populated these influential social spheres) needed a way to while away the hours when not debating the morals of army desertion or the efficacy of capital punishment. The pardessus provided just the right instrument.

Violin music (and all things Italian) had become quite popular within French musical circles by the 1720s, but there were strict proscriptions as to what instruments were appropriate for women to play. "Violin position" had been castigated since the Renaissance as ill befitting a woman's dignity. The viol, however, was considered perfectly acceptable, even ladylike.

Ancelet, a writer on musical aesthetics, wrote scathingly in 1757 of the old-fashioned thinkers who advised "the young ladies to prefer the pardessus over other instruments, as if it were less honest to put a violin on the shoulder than a pardessus between the legs." Indeed, this idea might also raise modern eyebrows, but such was the common opinion. In fact, the instruments were so thoroughly associated with ladies that decorative stripes, which were popular in women's fashion during the period, often graced the instruments' bodies.

These "noblewomen's violins" allowed exploration of the hot music of the day: Italian music, which had made a big splash in the so-called "Querelle des Bouffons," debates about the relative merits of Italian and French music. Much of the music for pardessus is, therefore, Italianate in conception, such as the arrangements of selections from opéras comiques by infrequently heard musicians named Bordet and Abbé le Fils.

The Catacoustic Consort selected a wonderful arrangement of numbers from Pergolesi's Serva padrona, which encapsulated this particularly French appropriation of Italian style. I searched in vain for the lines of the famous duet, "Lo consoco," on which a movement of this work was based. The original tune was so buried among the trills and frills characteristic of the period's French style that had you told me the piece was by Boismortier, I would have believed you.

What I did hear in that work, and throughout the evening, was just how many different colors this little instrument can produce, especially when the music intelligently exploits its various ranges. Low notes can sound throaty and full (more so than most violins can — the effect is like a bass viol's resonance, in miniature), while high notes can be quite clear.

Much of the idiomatically conceived music on this weekend's program exploited this feature, such as the sonata by Barthélemy de Caix, a work that demonstrated that some of the more dedicated among these salon women (or perhaps some professional musicians who frequented their ranks) were true virtuose. And Annalisa Pappano and Joanna Blendulf, the Catacoustic Consort's pardessus players, were absolutely up to the task that this music presented them.

Those moments when the little instruments were asked to do what they weren't built to do did not work quite so well. The most offensive misstep was the arrangement (by one Villeneuve) of pieces for two viols by Marin Marais. In these basically note-for-note transcriptions, the instruments were too closely matched in tessitura and timbre, completely obliterating all the variety of which the little instruments are capable. And of course, that's because the instrument that Marais had in mind was so different from what Villeneuve was transcribing for. The players would have done better to avoid this set altogether, since it neither suited the rest of the Italianate program nor highlighted their instruments' best qualities.

Overall, the concert's planning was a bit helter-skelter. Lutenist Daniel Zuluaga, for instance, was dragged onto the stage for just two pieces, and I was left to wonder whether he really needed to be there. I've heard Zuluaga's playing on numerous occasions, and Saturday night's performance wasn't up to his usual standard. His realization of continuo lines in the Marais mixed contrapuntal treatment liberally with chordal strumming, and I had the feeling that he was trying to fill in the gaps left by the lost resonance in the transcription. Again, it would probably have been best to leave this piece at home, along with Zuluaga, and bring them both out when the bass viols came back to play.

Youngmi Kim, soprano, was likewise trotted out to sing just three small airs, with the duo acting as a miniature orchestra. The effect was charming, especially in airs selected from Grétry's comic opera L'Amitie a l'Épreuve. Kim's voice is one of those silvery, "strand-of-pearls"-type voices. Such is not really my cup of tea, but I must admit that her passagework was flawless and her technique sound. And her particular vocal timbre suits this repertoire — and the precious presentation — perfectly. Had we but been in a drawing room, the effect would have been complete.