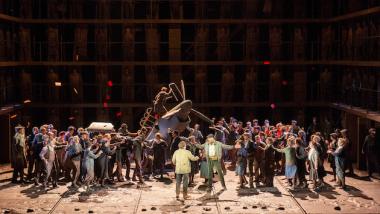 The Romanian George Enescu (1881–1955) is remembered today, when at all, chiefly as the composer of the First Romanian Rhapsody (1901), a brilliantly orchestrated fantasy based on Romanian folk material. Connoisseurs may also know his violin sonatas (he was a gifted violinist), his Octet for strings, his Dixtuor (decet) for winds — all of these composed by his 25th year.

But he also wrote five symphonies (the last left incomplete), a second Rhapsody, three orchestral suites, and three piano sonatas, all of which seem worth investigating. Why is his music not better known in the United States? Perhaps partly because of the success of that First Romanian Rhapsody, which typecast him as a composer of pops-concert material, partly for having been overshadowed by the successes of Bartók and Stravinsky, who worked in a similar vein of modernist regionalism.

It’s not clear that Enescu’s case will be furthered by the current production of his one opera, Œdipe, seen Dec. 6 in the Dutch National Opera performance in Amsterdam. Enescu worked at the score too long, I think, from 1910 to 1931, and presumably heard it only once, at its Paris premiere in 1936. It is a very ambitious work in four acts, portraying the life of Oedipus from birth to death (only the last two acts drawing on the Sophocles tragedies), and even in the opera house, in a thoughtful and modernized production, it seems more a dramatic cantata than a dramma per musica.

The title character carries the show. Oedipus is nearly always on stage, and subsidiary roles seem more like commentators than participants in the action. There are dynamic moments, but on the whole the opera seems meditative; Enescu seems to have dwelled long on the significance of the story, to the detriment of its action. Looking back to the century before his own, Enescu chooses Wagner, not Verdi. And the orchestral writing is colorful, imaginative, but over-detailed. This is opera on paper, not for the stage.

At least this seemed true in the direction of Àlex Ollé (La Fura dels Baus) and Valentina Carrasco. Updating the time to an unspecified mid-20th century was a good idea; presenting the Sphinx as the pilot of a WWII Spitfire worked; costuming the huge cast as Brechtian refugees reinforced the universal immediacy of the myth. But Alfons Flores’s set, a four-panel, four-storey frieze suggesting high-relief panels over a Greek temple, too often distracted from action, and Lluc Castells’s costumes too rarely individuated the characters (Sphinx, Jocasta, and Creon excepted).

Johan Reuter was perfectly persuasive as Oedipus; Eric Halfvarson a little bland but effective as Tiresias, Christopher Purves and Sophie Koch effective as Laios and Jocasta; Violeta Urmana marvelously weird as the Sphinx; Heidi Stober a touching Antigone. Rarely, however, did any of their French get across the pit, even to the fifth row of the audience. Fortunately, one knows the story, and supertitles in both English and Dutch were provided.

I don’t think that’s an acoustical fault of the theater: the orchestra was detailed and clear. (I’ve heard only one other opera in this hall, Einstein on the Beach.) I think vocal articulation was often muffled by the great quantity of costuming, misdirected by the stage directing which seemed diffuse and uncertain most of the time.

Worst of all, from a dramatic point of view, there is little intent in this direction to realize the pictorial quality of Enescu’s opera. The four acts — birth and abandonment of the infant Oedipus; encounter with Sphinx and murder at crossroads; revelation of Oedipus’s crime; apotheosis at Colonus — are not really individuated. Enescu’s charming musical description of the shepherd’s pastures and his horrifying musical portrait of the Sphinx are buried, visually, in similarly heavy and plodding stage direction, and the composer’s careful and effective long-span rise and fall, well brought out by fine conducting and instrumental playing, are dampened by a visual depiction of hopelessness. The opera deserves better.