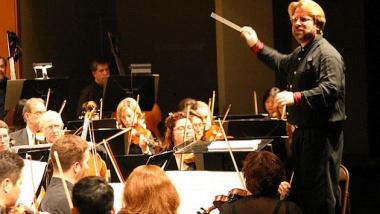 The Redwood Symphony opened its 34th season on Saturday, at Cañada College in Redwood City, with a concert demonstrating that it has the most interesting programming of any orchestra in the Bay Area, with the Oakland Symphony its only rival.

The programming is the responsibility of its music director, Eric K, who’s backed up by a sincerely dedicated and committed collection of nonprofessional musicians. Their playing standards, which have been improving in recent years, exceed those of some struggling professional groups.

The big surprise of Saturday’s concert was a piano concerto by Benjamin Britten. Few present are likely to have heard this work live before, as according to Dr. K, this was its Bay Area premiere. Why has this large-scale masterwork by a major composer been neglected? Could it be because Britten was only 24 when he wrote it in early 1938, and it’s hard to credit such maturity? Prokofiev was younger than that when he wrote his popular Second Concerto.

The Britten concerto sounds a lot like Prokofiev. It’s spiky, angular, and fiercely energetic, yet also tuneful. Soloist Tamami Honma played her busy and ornate part with a light touch and a constant rhythmic pulse. This suited a role that had few soloistic displays and mostly had to match up with the orchestra. Occasionally the light sound ran underneath the orchestra when perhaps it should not have, but the balance was mostly good. Honma abandoned her rhythmic pulse only in the first movement’s big solo cadenza, where she concentrated on providing varying inflections for repeated glissando runs and for banging on the far ends of the keyboard.

The orchestra’s equally busy music allowed for a lot of raw blaring from the winds and brass in dramatic passages, particularly in the finale. This suited the music and kept the work exciting. I saw some wind players grinning toothily after some particularly vehement tooting. Here the music evoked Shostakovich, Janáček, even Mahler. The strings, by contrast, were at their best in the rare passages of gentle repose.

It’s less unusual to hear music by Mason Bates, a local composer who’s been taken up by the San Francisco Symphony and the Cabrillo Festival, among others. He writes bright, rapid, pulsating post-minimalism similar in style to the works of John Adams. His music is warmly accessible and easy to get to know. One common feature in his works, including both of those heard on Saturday, is electronic sounds played off a laptop computer.

Rusty Air in Carolina depicts a warm summer night in that part of the world, with the electronics realistically providing the deafening clicking and buzzing of katydids, cicadas, and other insects. The orchestra is almost in the background here, playing languid — but still busy — meandering melodies that mesh intriguingly with the insects.

Mothership is a fast and powerful scherzo to which the electronics act as a superfluous beat track. Occasionally a high-pitched stuttering beep signals the orchestra’s temperature to cool down briefly and allow an instrumental solo or two. These can be on any instruments the performers choose, and Bates allows for limited improvisation within the framework of the music.

Redwood’s solos highlighted four members of the orchestra. The outstanding solo of the evening was on the cool jazzy flugelhorn of Stephen Ruppenthal. Concertmaster Danny Coward, Mark Goldstein on vibraphone, and Geoffrey Liu on orchestral piano also played solos, though they were harder to hear above the orchestra.

Throughout both pieces, the orchestra as a whole was loud, vivid, and in command of the intense rhythmic drive of Bates’s music. There may have been a few rhythmic glitches, but in terms of flow, control, and the atmosphere of the sound, Dr. K led what seemed to me a match for professional performances.

One more surprise enlivened the concert. Usually, Redwood’s assistant conductor Kristin Link is assigned a brief curtain-raiser. This time she conducted the largest piece in the concert, Brahms’s Symphony No. 3. Link had the orchestra proceed deliberately and cautiously through Brahms’s noble utterances. Minute adjustments of pacing in response to intensity or relaxation kept the music from being devoid of character.

If this approach was a bit torpid for the heroically grand outer movements, it was absolutely ideal for the inner movements. These were calm and mellow, a finely performed embodiment of Brahmsian introspection. The third movement begins with a yearning theme for cellos. This can be a treacherous spot for nonprofessional players, but the tone came out quite satisfactorily.

In general, the instrumental color was bright and sparkly, tilting towards the winds. It did not feel ill-balanced or out of place for Brahms, however. Only the disappearance at the very end, under held wind chords, of the soft return of the motto theme in the strings marred a well-delivered disposition of balance and charm.

Soloists are at the fore in Mozart’s Sinfonia Concertante, but the orchestra was at its best in the Stravinsky ballet.