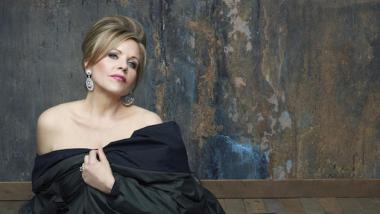 Renée Fleming Spins a Thread of Song at Cal Performances

The radiant Renée Fleming returned to Cal Performances Saturday for a full-length recital, and if her lyric soprano voice wasn’t always there as fully as in years past, her humane and generous persona filled the hall and delighted her audience.

At an age when many of us think about dozing on the beach with a book, Fleming is cutting back — but only a bit. Apparently, she will not sing her signature role of the Marschallin in Richard Strauss’s Rosenkavalier any more, but she clearly has plenty of songs to perform, young singers to coach and encourage, and new music to commission and premiere.

Fleming, accompanied by the sensitive and accomplished pianist Richard Bado, opened with a set of songs by Franz Schubert (on poems by Friedrich Schlegel and Goethe) ranging from charming (“Die Vögel” — a bird’s eye view of the world) to meditative (a gorgeous “Suleika”) and finally explosive (“Rastlose Liebe” — a manic whirlwind of love).

The next set of four songs, in French, took off from Schubert’s Romanticism, moving to an even more passionate level. The highlight of this set was Reynaldo Hahn’s youthful setting of Victor Hugo’s poem, “Si mes vers avaient des ailes” (If my verses had wings)­ — delivered, as Fleming can do so well, with both emotion and clarity.

Two songs in French by Franz Liszt — predictably pianistic — gave pianist Bado a chance to shine. There were some issues of ensemble and pitch, perhaps because, as Fleming told the audience, this repertoire is new to her. In these songs, as throughout the evening, Fleming was in fine voice in the lower registers, but (particularly in the first half) her high notes sounded thinner and more forced than in years past, when high passages were like light, tensile cords of pure sound.

Between sets — and sometimes between songs — Fleming generously spoke about the music and about life. Knowledgeable, charming, and passionate, she made us feel almost as if we were her students in a masterclass, the best hopes for art in a future generation. Thank heavens for an artist of her stature willing to share her thoughts and feelings!

Cal Performances projected the song texts as supertitles, rather than printing them in the program booklet. It was a smart move, keeping our heads out of our programs (which would have been barely readable in the dim house lights).

After intermission, Fleming and Bado performed selections from a new song cycle by Kevin Puts based on the letters of Georgia O’Keefe, evoking the artist’s responses to the New Mexico landscape. I especially loved the closing song, “Canyon,” with its sense of calm and unobtrusive delight. It ended beautifully on the simple phrase “It is wonderful.” Fleming’s supple delivery of these letters reminded me of how sensitively she sings prose, and sent me to listen again to her evocative performance of Samuel Barber’s Knoxville: Summer of 1915 on her album Distant Light.

The wonder of a landscape loved and lived in was also the theme of the next song, “I have dreamt,” an aria that the dying Catherine Earnshaw sings in Bernard Herrmann’s opera Wuthering Heights. Fleming perfectly caught the complexity of the final phrase, “I awoke, sobbing / for joy.”

I’m not sure what two songs by Franz Lehar were doing in this set — they were too youthful, too naïve for the context. The program ended, however, with three powerful operatic numbers. It helped that, in the second half of the recital, Fleming moved from art-song to opera: her voice (unamplified) began to fill Zellerbach and to really spin out the high notes.

“I want magic” comes from the opera version of A Streetcar Named Desire by the late André Previn; Fleming nailed the mix of delusion and self-knowledge that Blanche DuBois lives by: “I don’t tell the truth ... if that is such a sin, then let me be ... damned for it!”

The next song took the utterly familiar and made it new. We all know Rodgers and Hammerstein’s title song from The Sound of Music (“The hills are alive with the sound of music”), but until Fleming sang it, I had forgotten its dark uncertainties, its mysterious pantheism, and its sense of human loneliness, as Romantic in its way as Schubert’s Goethe settings.

Fleming’s final number was an aria from Adam Guettel and Craig Lucas’s 2005 musical, The Light in the Piazza, opening this weekend at Los Angeles Opera, in which Fleming plays a mother whose vulnerable daughter is falling in love. “Fable” is a beautiful song (composer Guettel, she told us, is the grandson of Richard Rodgers) about how dangerous it is to look for love as if it were a fable, and yet how crucial it is “to love if you can” — a romantic quandary, which Fleming, a great Romantic herself, delivered with a combination of wisdom, impatience, and tenderness.

The single encore was Richard Strauss’s “Morgen!” (Tomorrow!) from his Opus 27 song cycle, sung with timeless ease in memory of the late Jessye Norman.