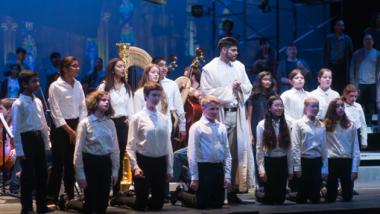 For San José State University’s School of Music and Dance to mount a production of Leonard Bernstein’s Mass: A Theatre Piece for Singers, Players, and Dancers, which it did last weekend at the Hammer Theatre Center, is a marker in establishing the work in the canon of masterpieces.

When Mass was first performed, at the opening of the Kennedy Center in Washington in 1971, it was widely critically derided as vulgar, incoherent kitsch. But it proved to be merely ahead of its time. Growing acceptance of eclectic mixtures of musical styles has given listeners the ears to accept Bernstein’s bold mixture of classical, jazz, popular, rock, and folk influences. And Bernstein’s and Stephen Schwarz’s informal trope lyrics have proven not dated but continually relevant.

Putting on Mass is not a simple job. It requires a massive cast of performers, and a theatre director and choreographer as well as a music director. Still, I’ve seen it performed professionally three times in the last two decades, including from the Oakland Symphony under Michael Morgan, which was busy putting on West Side Story on Friday while I was at Mass. (Bernstein is everywhere.) To find Mass in a local college production suggests it’s on its way to becoming a standard repertoire work.

Hammer is a drama theater rather than a concert hall, and some creative staging was needed to fit into a limited space. The SJSU Orchestra, fairly small but amplified (as were the singers), was crowded into stage right. It was conducted by Dr. Fred Cohen. The Celebrant, Brandan Sanchez, did much of his preaching from beneath a tree in the corner in front. The rest of the stage was filled with steps and scaffolding, much used by the 20 Street Singers, all from SJSU Opera Theatre. The Vivace Youth Chorus, directed by Peggy Spool, appeared in front or on a Juliet balcony as needed. Three women from SJSU Dance ran down the aisles occasionally for liturgical dancing in front of a large wooden cross lowered on wires, which was draped with a shroud in Easter season imagery. And the SJSU Concert Choir, directed by Kristina Nakagawa, was hidden down in the orchestra pit.

The staging, directed by professor Sandra Bengochea, was simple. Over the Celebrant’s plain shirt and trousers, for vestments he had only an off-white robe with a brown stole. (Brown is not a Catholic liturgical color.) There was no altar and no chalice; the shattering of the chalice was done by sound effects. The Street Singers all wore matching hoodies, which they cast over their heads on occasion.

Photos both still and moving were projected onto a back screen about half the time. These ranged from clips from the 2016 election during the opening Antiphon to peaceful shots of flowers or of music students at work on campus in quieter moments. At the words “I believe in F-sharp / I believe in G” in the Credo, we had a projected music-reading lesson. (This is a university, after all.) Most affectingly, the preceding trope, “World Without End,” was accompanied by matching split-screen images of peace and war: half of a spreading tree, half of a mushroom cloud of the same shape; half of Michelangelo’s David, half of a man holding a machine gun in the same position.

The performance was scrappy rather than polished, but always sincere and appealing. Sanchez is a light baritone, who shifts into a different vocal register for his higher parts. He was in fact more comfortable in his highest notes than in his lowest ones, for which he had to strain. He interacted well with the other onstage singers, acting instructive with the children and advisory or gently admonitory with the Street Singers. These latter were sassy and cheeky, at one point taking selfies with the Celebrant. They got off to a restrained start, but became more comfortable with their role. By the Credo, they were roaring out their parts, and the Agnus Dei was shattering, figuratively as well as literally. The orchestra accompanied both quiet and raucous passages appropriately, and the enlarged brass section functioned as a substitute for a marching band for that section of the Kyrie.

Only the Celebrant’s big solo in the Fraction, “Things Get Broken,” could have used more emotional intensity. Overall, San José State gets a high grade for undertaking this large-scale extra-credit project.

Bernstein’s still-vibrant musical gets a thrilling account at the Paramount from the Oakland Symphony and a bevy of strong soloists and choirs.