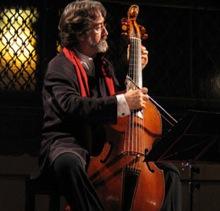 Savall Scintillates With the PBO

Jonathan Rhodes Lee on March 8, 2010
Sunday evening at Berkeley’s First Congregational Church, the Philharmonia Baroque Orchestra treated an enthusiastic audience to a Francophilic romp through Europe, titled “The French Suite in Europe.” We started in Stockholm, of all places, with Guillaume Dumanoir’s 17th-century Suite du Ballet de Stockholm. Little is known about this piece, which comes to us from a single manuscript source in Kassel, Germany, a fact that explained the bizarre Franco-Germanic movement designations in the program. (My favorite was “Geschwindt-Langsamer Sarabande.”) Next, we were treated to a suite from the father of French opera, Jean-Baptiste Lully. The second half of the program traipsed across the continent and a half century for music by Georg Philipp Telemann, and then we swam the Channel for George Frideric Handel’s famed Water Musick. In short, this was a program of no small ambitions.

Whenever Jordi Savall leads this (or any other) group, he has a way of making unfamiliar music easily palatable, and of rendering familiar music in a way that’s sufficiently unique as to be refreshingly different. Sunday’s performance met this standard, and then some.

The Stockholm suite fit the first category — unfamiliar music rendered palatable. Dumanoir is hardly a household name. Nor, to be completely honest, should he be. His music is unrelentingly homophonic, and pretty schematic stuff. He argued well, though; his Mariage de la Musique avec la dance of 1664 has become a central document for musicologists’ understanding of the period’s French musical institutions, and it shows him to have been a pretty cantankerous sort. Savall and the PBO band brought out every sensual nuance in this music, particularly enjoying the rhythmic liveliness appropriate for a Frenchman who argued the dependence of dance’s emotive effect on music’s ability to stir the soul.

Particularly toe-tapping were those moments when David Tayler set down his theorbo and scooped up his Baroque guitar, memorably accompanied by Marc Clos on tambourine for some low-down French country music (a so-called tambourin, if you must know). Stephen Schultz whipped out a piccolo for a fiery little piece titled Presto (Hungaresca) — the title clearly another product of the strange German manuscript designations — and the result was thrilling. That movement, combined with the natural trumpets and horns, the drums, and the “outdoor” reed instruments (instrumentation that also marked the colorfully scored Lully suite), had me ready to mount a horse and go skewer some Englishmen by the end of the first half.

Inspiring and Vivacious: Telemann and Handel

Savall’s program may have intended to show the influence of the French aesthetic throughout Baroque Europe, but his second half actually showed just how far the Germanic composers were able to adapt, stray from, and naturalize their models to the tastes of their own milieus. Telemann, for instance, is one of the least understood composers in music history. He is forever castigated as the producer of dull pieces fit for students, or as the more prolific but less ingenious contemporary of Bach and Handel. Yet Telemann wrote over 3,000 pieces (at current count), and sustained study of his music reveals him to be one of the most innovative composers of the era, both stylistically and formally. His Ouverture for viola da gamba, strings, and continuo illustrated this fact quite well.

The Ouverture was, on the surface, modeled after those old French instrumental dances of the previous century. The work opens with a Lullian bipartite overture, and a mishmash of typical binary dance titles to follow. Yet what Telemann did with this suite was remarkable: It’s a set of dances on the outside, but an Italianate concerto on the inside. Savall led from his gamba, and clearly relished the opportunity to join with Philharmonia’s crackerjack musicians. The performance was one of balanced fireworks and sensitivity, the entire group responding wonderfully to Telemann’s inspiring music. Especially memorable was the suite’s sarabande, in which Savall alternately played mournful solo lines and spine-chilling parallel octaves with the upper strings. A rhythmically vivacious courante also made me sit up and listen closely, particularly the spectacular passagework in the movement’s double. This is ferociously difficult music, and Savall didn’t toss it off with his usual nonchalance. Instead, he tackled the giant beast headlong, and the results were scintillating.

We finally heard some popularly familiar music with two of the suites from Handel’s famous Water Musick. Here, again, the composer managed to take a French model and transform it into something simultaneously both distinctly English and distinctly Handelian — a paradox that only that unique composer could effectively accomplish. Memorable here were the delightful color change brought about by Hanneke van Proosdij’s soprano recorder playing, the relish that the middle string players got out of their folksy (and very English) melodic lines in the second gigue of the D-major suite, and the astoundingly beautiful shaping (thanks to Savall’s sensitive interpretive planning) of a movement marked simply “Lentement.” But what rang in all our ears as we left the hall that evening were the sounds of the brass players. Simply put, I’ve never heard Philharmonia’s natural horns in better form than they were in this concert; that most beloved of all Handel’s orchestral pieces — the “Alla Hornpipe” from the G-major suite — left me grinning from ear to ear.

The concert was like a delicious multicourse French meal, and cried out to be topped off with an after-dinner coffee. So, we all clapped along, at Savall’s insistence, to a lively rondeau from Jean-Philippe Rameau’s Les Boréades. This 1760 work was the last major production from the musician who today is considered the last great French Baroque composer, but who during his lifetime was often accused of watering down French music with foreign influence (chiefly Italian). What a fitting way to close a program that dwelt on the inherent paradox of the international “French” suite.