As the rays of the setting sun gave the stained glass windows of St. Mark’s Lutheran Church a final brush, bathing the auditorium in a bright, golden glow, the San Francisco Choral Artists (SFCA) and their magnificent and beloved artistic director, Magen Solomon, started what became 90 minutes of pure delight.

Last Sunday’s performance, titled “A Rebel’s Christmas: Martin Luther’s Musical Reformation,” was part concert and part history lesson, thanks to “guest monk” Stephen Wilson, who, as a historian and a linguist, gave some insights into Martin Luther (1483–1546), and his role in the history of music and liturgy.

This year marks the 500th anniversary of the publication of Luther’s schism-inducing Ninety-five Theses of 1517. The split that resulted from this publication not only had profound religious and political consequences, but also, and much more positively, a significant impact on music, especially inside the newly formed Protestant church.

As Solomon argued in her written introduction to these season-opening performances, Luther, who was an accomplished musician and composer, changed the role of music within religious practice by translating religious texts from Latin into the everyday language, and by strongly promoting “singing as a means of public and private worship.”

SFCA’s concert (led in part by Assistant Conductor Tina Harrington) was organized in a series of loosely holiday-themed vignettes which illustrated Luther’s influence on composers of his time, but also on the likes of Bach, Mendelssohn, Brahms, and on modern composers.

Thus, in the “A Prayer for Peace” segment we heard settings by four different composers of Luther’s text “Verleih uns Frieden gnädiglich” (Graciously bestow peace upon us), including relatively unknown Renaissance composers like Balthasar Resinarius (1486-1567) and Johannes Eccard (1553-1611), as well as a more familiar name, Hugo Distler (1908-1942).

The segment led up to the first of three world premieres of the afternoon: Be Still, and Know, based on Psalm 46:10, by North-Carolina-based composer Ash Stemke (b. 1991). 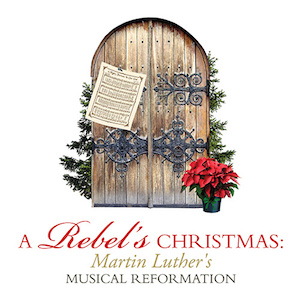 The second world premiere came from SFCA’s Composer-Not-in-Residence Sylke Zimpel (b. 1959), who is German, lives and works in Dresden, and finds inspiration in folk music from Germany and eastern Europe.

Her composition, Es träumet einer Frauen (A woman dreamed a dream), is based on a 19th-century Volga German song about a woman’s wondrous dream, in which a tree “from under her heart” grows so far and wide that it covers all of Christendom. The fluidity of Zimpel’s music reflected the growing tree.

SFCA’s Composer-in-Residence Michael Kaulkin (b. 1967), who is based in the Bay Area, was responsible for the third world premiere. He unwittingly gave the concert an appropriate motto with the use of two quotes from Martin Luther as text for his playful composition The Noble Art of Music: “After the word of God, the noble art of music is the greatest treasure in the world,” and “As long as we live, there is never enough singing.”

It was especially in these brand new pieces that SFCA delivered the goods. Comprised of excellent individual vocalists, the Choral Artists are a tightly knit ensemble, perfectly balanced and disciplined in every respect, and effortlessly navigating five centuries of Western classical music.

Their exquisite singing, in combination with Stephen Wilson’s dry wit and concise delivery were a perfect way to spend a late afternoon in this holiday season.

The driving force and great inspiration behind SFCA is, of course, Magen Solomon, who is always profoundly grateful to her singers and the audience, and never seems to give herself the enormous credit she deserves.

S.F. Choral Artists Walk On the Wild Side

Magen Solomon’s unusually broad program showcases nearly a millennium of music by and about women.