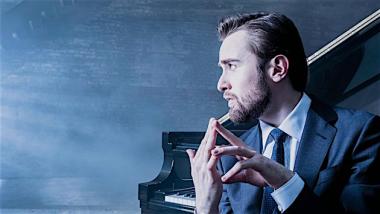 Of the series of big programs concluding the San Francisco Symphony’s season, the most quietly promoted was last week’s. Music Director Michael Tilson Thomas conducted works by two staid and respectable early 20th-century composers: one popular piano concerto by Sergei Rachmaninoff and two enigmatic symphonies by Jean Sibelius. I heard the first concert, on Thursday. The Sibelius in particular turned out to be an awesomely outstanding performance.

Daniil Trifonov, a young Russian, made an excellent piano soloist. His light-fingered style was gentle, clear, and luminous. It matched well with Rachmaninoff’s Piano Concerto No. 3 in D Minor (1909), which begins and sets the mood with a simple, easy, and charming melody in parallel octaves. Trifonov kept this simplicity and clarity of sound going even as the music grew more complex, rising to clotted runs which in these hands danced lightly. He eschewed dramatic passion in the Intermezzo slow movement, and the Finale, rather than releasing tension, came as a cheerful brightening of color.

The orchestral accompaniment was appropriately relaxed and easy. Though this matched Trifonov’s style, the combination lacked tension and imparted laxity to the structure. The music wandered around and occasionally seemed superfluous. Indulgence is a common feature in Rachmaninoff performances, though not a necessary one. There’s not a major work of his that can’t be tight and compelling, but that requires a level of blistering energy that would have been out of place in this interpretation.  That’s more the way Yuja Wang would play it, and how Tilson Thomas would accompany her.

To be sure, there’s nothing wrong with wallowing around in Rachmaninoff’s lush, late-Romantic beauties for a while. The problem is that this felt anticlimactic as the second half of a concert that had begun with brilliantly taut renditions of the austere severities of Sibelius’s final two completed symphonies. Sibelius worked on his sixth and seventh symphonies simultaneously in the early 1920s and gave them consecutive opus numbers, 104 and 105. They’re both short, not much more than half the length of the Rachmaninoff, but they differ greatly. The Sixth is in four brief movements, while the Seventh was the first major one-movement symphony. The Sixth is in the key of D dorian — not D minor, as it’s often listed, and James M. Keller’s program notes chided those who mislabel it — while the Seventh is in a more conventional C major.

The two symphonies sound different, as well, and that was particularly relevant to these performances. The Sixth is a light and elusive work. When I’ve heard it performed before — not that it gets performed frequently at all — I sometimes wonder what the point of the music is or even if it has one. Tilson Thomas and the San Francisco orchestra, however, made this piece lucid, compelling, and flowing, reminding me constantly of why I love this work when it’s well-played. It’s a small piece of quiet lyricism that, in unassuming beauty, resembles the Third more than any other previous Sibelius symphony.

The Seventh is a tougher, harder, and gnarlier nut, more harsh and aggressive than the Sixth. Of Sibelius’s earlier symphonies it most resembles the infamously difficult Fourth. Perhaps because it’s a more extroverted piece, good performances of the Seventh are easier to come by than good performances of the Sixth. Often enough, conductors approach this large and varied single movement by dividing it up into distinct sections, according to their own conceptions of its unspecified structure. Tilson Thomas approached it differently, treating what would otherwise be gateways between sections as events, highlights in a musical chronicle. The resulting flowing narrative had much in common with the performance of the Sixth, despite the gap between the works’ styles.

By nature, the Sixth, when well-performed, is a more beautiful work than the Seventh, but the performances of both works had the same outstanding qualities. These two symphonies together made for one of the half-dozen greatest symphony performances I’ve heard from San Francisco under Tilson Thomas, one of its predecessors being a Sibelius Third several years ago, the same time that Yuja Wang played the Rachmaninoff Third Concerto. When the orchestra is completely on top of its performing quality, and Tilson Thomas’s direction reaches the ultimate in its subtle depth, as it did in these Sibelius works, the result is the most sublime music-making available.

Yuja on Fire at the S.F. Symphony

Yuja Wang tore through Rachmaninov's monumental Piano Concerto No. 3 in her most exciting and unbelievable S.F. performance yet.

Orchestra and conductor were in top form, but Latvian violinist Baiba Skride stole the show.

Nareh Arghamanyan performs piano works by Rachmaninov with passion and technical fluency, on a CD whose program notes run from problematic to sappy.