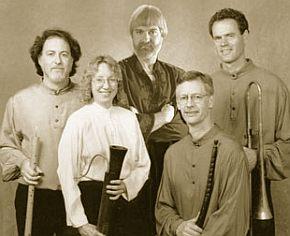 Jonathan Rhodes Lee on November 11, 2008
In 1692, one Peter Motteux expressed surprise about having heard trumpets and oboes play elegantly during dinner: "Mr. Showers hath taught [the oboes and trumpets] to sound with all the softness imaginable ... [such] being a thing formerly thought impossible ..." On Friday, the Boston Shawm and Sackbut Ensemble demonstrated that this is a lesson that we 21st-century listeners might also need to learn. These so-called "outdoor instruments" made a beautiful sound in San Francisco's St. Mark's Church, playing both secular and sacred music from the 16th and 17th centuries — and not a single eardrum was shattered. The program was full of pleasant surprises. First was the mass of 13 people on stage, playing all manner of funny instruments, which might need a bit of description. (Readers who are seasoned Renaissance music buffs may skip the next few sentences.) No, sackbuts are not people who need to go to the gym more often. They're brass instruments controlled with slides, not completely unlike our modern trombones. The name, in fact, comes from two French words, sacquer and bouter, both of which refer to the act of pushing the slide in and out. Then, there were shawms, wonderfully buzzy double reed instruments, most reminiscent to modern listeners of loud and piercing oboes. Cornetts, wooden, crooked instruments fingered like recorders but buzzed into like trumpets, played soprano lines. A bass dulcian, another buzzy double reed instrument, this one rather big (sort of like a bassoon), jauntily played bass lines, joined by the excellent continuo work of not one but two local harpists: Cheryl Ann Fulton and Margaret Cohen, playing triple and cross-strung Renaissance harps. As if this potpourri of instrumentalists were not enough, a cadre of local singers, organized by soprano Ruth Escher, joined them. Daniel Stillman, a founding member of the Boston ensemble, spoke lovingly and humorously about the logistical and financial difficulties that this program posed. Getting 13 instrumentalists and singers together stretched budgets and exercised calendar-planning skills. A generous grant from the local wind band Alta Sonora made it possible for the harpists to join, and general enthusiasm for the project helped hold the bicoastal group together.

The program's selections were as rare as the instruments, and proved once again that musicology really can make a difference in the world. Ensemble member Douglas Kirk did his Ph.D. dissertation on music of the Spanish Renaissance, and some of the discoveries he made in a particular manuscript (the appropriately named "DK manuscript") served as the core repertoire for this performance. We heard works that in some way touched on the Duke of Lerma and his court, formerly considered to be the very model of dissolute self-indulgence and corruption, but today undergoing a sort of historical reassessment. Kirk has been an important figure in this reappraisal, and many of the pieces that he's turned up show just how much good music we've been missing from the Renaissance Spanish court — until now. Take, for instance, the liturgical works of Sebastián de Vivanco, a composer from the mid-16th century. His setting of the Magnificat proved remarkably well-suited to a modern concert setting. Each vocalist and vocal grouping was given opportunities to shine within an ecumenical framework. For the text "Et misericordia eius in progenies/et progenies timentibus eum" (And his mercy is on those who fear him/from generation to generation), for instance, the lower voices of each grouping — that is, bass, second tenor, and countertenor — offered up pleas of supplication from the depths of the earth. Countertenor Paul Flight is always a joy to hear, and this section was no exception, his dulcet production perfectly capturing the solemn nature of this text. Suddenly, however, with the text "Sucepit Israel puerum suum" (He has helped his servant Israel), Ruth Escher's bell-like voice raised us up from the depths of mere worldly concerns, leading the rest of the voices to laud God and his protection of his followers. Vivanco distributed the voices homophonically for the final words of the setting, the closing words of the Doxology ("As it was in the beginning, is now and ever shall be. World without end, Amen"), which perfectly summed up the trajectory of the text, from glorification of individual accomplishments to rejoicing in the unity of the Trinity. Vivanco's handling of these textural matters, as well as the ensemble's deft performance, did a great service, providing us with beautifully crafted and expressive music that few of us had ever heard. But the concert wasn't all about heavenly matters. Some of the more earthy pieces on the program bordered on the scandalous. Take, for instance, the Endecha entitled Burlose la niña by Gabriel Díaz Besón, an early-17th-century chapelmaster in Lerma. My understanding of the Endecha is that it was a sort of funeral song or lament. But the text of this bawdy song was hardly elegiac: "The girl mocked Love and fled from him; Love runs after her, but ah! If he catches her ..." At this point, the vocal parts broke out into an absolutely salacious series of guttural exclamations: "mas ay! mas ay! mas ay ay ay!" — which could only have symbolized one thing. As it turns out, 17th-century chapelmasters knew how to have fun, too.

At some points, the necessarily crunched rehearsal time did show around the edges. Most shaky was the Pentecost sequence Veni Pater pauerum by Stefano Limido. Here, the text calls on God to come ("veni") and console grieving pilgrims. The performers apparently took their inspiration from these repeated calls for arrival and the way in which Limido set them to running scalar lines in dense counterpoint. Unfortunately, they weren't quite up to the task; too fast a tempo, perhaps, or not enough rehearsal time? It wasn't clear, but the instrumentalists and vocalists didn't hang together, and the consonants often got lost in a wash of sound that never had the rhythmic verve that the performers were hoping for. Kirk did his best, conducting with a sort of manic enthusiasm, but even his aid couldn't entirely pull it together. Fortunately, there were lots more delights than disappointments — too many to list in one review. Harpist Cheryl Ann Fulton brought well-deserved spontaneous applause in the middle of one set with the naturalness and ease of execution that is the hallmark of her style. (The noisy bray stop on Margaret Cohen's harp, which made a novel buzzing sound, got our attention, too.) And whoever put this program together had the good sense to end with the music of Tomás Luis de Victoria. Roughly contemporary with Vivanco, Victoria has, in sharp contrast to his colleague, enjoyed a sort of posthumous fame as Spain's greatest representative from the Renaissance. Sunday's concert reminded us why his reputation is so stellar. Hearing his music among that of his contemporaries, I could hardly help but be struck by just how unique Victoria's grandeur is. His music possesses an unrivaled melodic grace that makes him a perennial favorite among modern listeners. I managed to fight back tears during the men's elegant presentation of Pueri Hebraeorum (The children of the Hebrews), but by the final Alleluia of Surrexit pastor bonus (The good shepherd is arisen), there was hardly a dry eye in the house. What a rare opportunity this concert presented, to hear an impassioned performance of some rarely heard music on some rarely heard instruments. If we needed reminding that these instruments and this music can "sound with all the softness" — and grace — imaginable, the Boston Shawm and Sackbut Ensemble's recent collaboration certainly served this purpose.