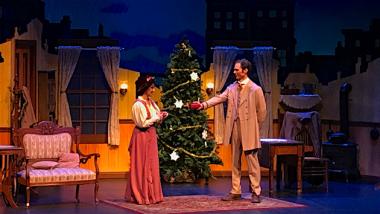 Solo Opera Delivers a Sweet Gift of the Magi

If you think shopping for holiday presents is complicated, try it on a budget of $1.87. And on Christmas Eve, no less.

That’s the problem that Della and Jim face, in San Francisco composer David Conte’s short opera, The Gift of the Magi. The 1997 work, on a libretto by Nicholas Giardini and based on the famous old warhorse of a short story by O. Henry, was revived last weekend by Solo Opera at the Lesher Center for the Arts in Walnut Creek.

In both the story and the opera, the nearly penniless young couple buy presents for each other, raising the cash by selling their proudest possessions, which ironically defeats the intention of each gift. You probably know how this comes about (it involves hair and a watch); if you don’t, read the story (you can read it for free here, and will take you about 10 minutes).

The opera, originally commissioned by the San Francisco Conservatory of Music, is a pleasant Christmas ornament, decorated with a nice combination of humor and sentiment. The tuneful music is heartfelt and easy on the ears.

The production, spearheaded by Solo Opera’s producer and director Sylvia Amorino, was well suited to the small auditorium at the Lesher Center, but the set and costumes were too clean and too upscale for O. Henry’s shabby “furnished flat at $8 per week.”

The role of Della was beautifully sung by soprano Ann Moss, with clear, silvery tones and passionate sweetness. Her Della, at first glance shallow and vain, gradually revealed a more conflicted inner life, at once proud of her beauty and hesitant about its effects on her husband, and in the end surprisingly strong-minded.

Baritone Daniel Cilli brought an endearing awkwardness to Jim, a stiff young husband caught in his need to act “as a man.” Cilli sang with a winning combination of earnestness and comic self-deprecation, but I wished for more expression in his voice when Jim broke free of his shell in a couple of passionate moments.

The small chamber orchestra (three strings, three woodwinds, and piano) played with accuracy and brio. The opera was sensitively conducted by Alexander Katsman.

The opera expands O. Henry’s slight narrative by adding two new characters. Mezzo-soprano Lisa van der Ploeg memorably negotiated both comedy and pathos as Maggie, in the scene in which she at first confronts Della and, eventually, supports her wholeheartedly. Bass-baritone Ben Brady, as the gruff and good-hearted Henry, has a parallel scene as a voice of conscience for his friend Jim.

The title characters, the anachronistic Magi, were costumed as carolers, singing close-harmony, chorale-like admonitions about how gift-giving needs to come from the heart. Their solemnly moralizing music seemed out of sync with the more comedic and domestic aspects of the main action.

By the end, Della and Jim, even though their gift-giving has gone disastrously awry, are reunited in a heart-warming, moonlit embrace, with a sweet love duet in front of the Christmas tree. May all of our gift-giving come out as well, even if we only have $1.87 to spend.

The composer talks about his education with Nadia Boulanger and his time teaching at the San Francisco Conservatory of Music.

Hansel and Gretel Goes “Where the Wild Things Are”