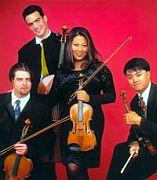 Sweet Reveries on a Sunny Day

Rebekah Ahrendt on March 4, 2008
What a perfect day. On Saturday I had the pleasure of listening to the Miró Quartet at the Florence Gould Theater of San Francisco's Legion of Honor. All my regrets about missing part of a beautifully sunny afternoon were dispelled by the performance of this first-rate ensemble. Two favorite works by Mozart and Beethoven joined a lesser-known excursion from Toru Takemitsu to form a well-balanced program. The Miró Quartet formed at Oberlin College back in 1995, and the years of performing together have paid off. The ensemble playing was impeccable, yet each individual member seemed free to use his or her own personal voice, as well. This was immediately apparent in the opening work, Mozart's beloved K. 499 in D major. The work is known as the "Hoffmeister" for its publication by Anton Franz Hoffmeister soon after it was written in 1786. In that summer after The Marriage of Figaro, Mozart composed much of his finest chamber music, this quartet included. The first movement is basically a monothematic romp around the harmonic universe. A unison opening quickly gives way to a series of conversations, with each individual voice contributing to the general buzz. The Mirós admirably followed all the twists and turns, from the opening unison to the punchy ending. Even punchier was the second-movement Menuetto. Like certain other Mozart minuets, this one has a Ländler-like feel, due mostly to the drone bass in the cello. Cellist Joshua Gindele put on his wooden country shoes for this movement, giving an air of rustic pleasure to the piece. No ballroom refinements here — those were saved for the elegiac Adagio. Particularly enchanting were the duet exchanges between the violinists, Daniel Ching and Sandy Yamamato, answered tenderly by Gindele and violist John Largess. The last movement, Molto allegro, was particularly exciting. The quartet's gestures of poking and prodding one another higher, faster, and louder made for an exhilarating ride. Even at the extremely fast tempo they chose, the players were perfectly together and always articulate.

Dipping Into a Stream of Consciousness

Takemitsu's A way a lone (1981), inspired by a passage from Finnegans Wake, provided a sharp contrast to the two canonic works of Mozart and Beethoven. Like the novel that inspired it, the work is a chorus of fragments in one movement, with the stream of consciousness only occasionally punctuated by a breath or a full stop. Perhaps sensitive to the needs of the audience, Largess introduced the work, giving some hints about how to listen to it. Preprogramming an unfamiliar work's reception is often a good idea, and it seemed to me that the listeners appreciated the images of the sea that Largess' words brought to mind. It was easy to hear the sea in the quartet's surging interpretation of the work. The second half of the program was devoted to Beethoven's now-classic Op. 59, No. 2, the second of the "Rasumovsky" quartets. Like its older sibling, Op. 59, No. 1, in F major, this E-minor work was ill-received in Vienna on its presentation in 1806. It was considered "too difficult." Well, it is difficult — except when the ensemble is as good as the Miró Quartet. The opening Allegro features a series of tricky fragmented phrases, much like the Takemitsu, in fact. The Mirós demonstrated a perfect sense of timing that led to a most satisfying reading of this piece. After the bow-throwing boisterousness of the opening movement, the Molto adagio came as almost a relief. A hymnic, chordal opening soon gave way to the stuttering sensitivity of Ching's sound, richly supported by the other players. The sweet reverie was broken only by the country dance of the third movement Allegretto, played even more aggressively than Mozart's Ländler. Once again, the quartet shone in the final movement. Its rhythm was extremely tight, a necessity in such a tightly constructed finale. Yet that does not mean that they were motoric; rather, the quartet simply fluctuated in tempo together. My only complaint is that the ensemble's sound in this performance was sometimes unbalanced. Perhaps because of the acoustics in the hall, or because of how the players were seated, the cello tended to dominate. I normally do not object to strong bass sounds, but the delicate counterpoint of the inner voices was often lost, and even the first violin sometimes was a struggle to hear. This did not seem to bother Saturday's audience, whose loud ovations were recompensed with an encore: the slow movement from Debussy's lone String Quartet. Thus, a perfect afternoon came to an end in a dreamy, impressionistic wonderland.