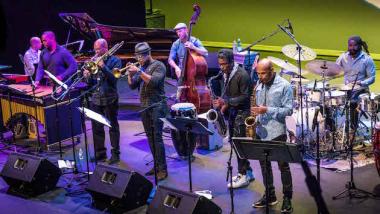 After a week of intensive all-day rehearsals, the latest version of the SFJAZZ Collective debuted Sunday night at San José’s Hammer Theatre with a concert that reaffirmed the ensemble’s animating mission and its ability to thrive despite (or maybe because of) considerable turnover in personnel.

Founded in 2004, the eight-piece group has featured some of jazz’s most influential and esteemed musicians, including players with prolific careers as bandleaders with seemingly little need of the visibility afforded by a stint in the ensemble. But with the dual directive of arranging classic material by a designated master — this year’s honoree is Antonio Carlos Jobim — and composing an original piece for the group, the SFJAZZ Collective seems to have little trouble recruiting world-class artists when a musician decides that it’s time to move on.

Sunday’s concert unveiled two new players and started the timer on the concluding Bay Area run by the band’s last original member, alto saxophonist Miguel Zenón. After a couple more out-of-town dates, including Oct. 17 at UC Davis’s Mondavi Center, the Collective plays its annual home-building run Oct. 18–21. Zenón tours with the Collective in Europe through the fall, and across the U.S. in the spring as the band rebuilds cohesion after changing up a quarter of the cats. Judging by Sunday’s show, these spectacular musicians are off to a strong start.

Gone are trumpeter Sean Jones, who was hired to chair the Peabody Institute’s jazz department, and the quietly essential bassist Matt Penman, the second longest serving Collective member. Taking over those chairs are Trinidad-born trumpeter Etienne Charles and bassist Matt Brewer, making this both the Collective’s youngest incarnation yet and its most Caribbean (a development highlighted by the Jobim material).

If Sunday’s show offered a glimpse at where the Collective is going, the destination is more diverse than ever. The concert opened with Puerto Rican tenor saxophonist David Sanchez’s brisk and counterintuitively bouncy arrangement of “A felicidade,” the foundational Jobim hit from the 1959 film Black Orpheus that introduced the world to the Brazilian sense of pleasurable but melancholy longing known as saudade. With Charles contributing to the rhythm section on cajón and Sanchez on conga, the piece was more about the night of Carnaval than the sadness at its passing.

Sanchez’s exquisite tenor sound was also front and center on Simon’s arrangement of “The Girl From Ipanema,” which didn’t so much reinvent the once ubiquitous standard as turn it into a sumptuous brass setting. In what seems like an inside joke, Zenón, who’s known for constructing intricate metrical puzzles, arranged Jobim’s “One-Note Samba.” This is a piece that will benefit greatly from further bandstand refinement. Orchestrated around alternating spacious and dense passages, the tune climaxed with a duo dialogue between Zenón and drummer Obed Calvaire.

Throughout the evening, Calvaire’s trap work was a study in buoyant propulsion and dynamic shading, and his hide-and-seek arrangement of “Corcovado” was one of the evening’s highlights. The hushed exhale opening phrase didn’t emerge until halfway through the piece, but he’d already evoked the sense of falling in the Milky Way with a circular seven-note piano figure.

Moving between double bass and electric bass over the course of the concert, Brewer premiered “Unspoken World,” an original piece felt like a through-composed mood study. Vibraphonist Warren Wolf delivered the standout commission with the Herbie Hancock-inspired “Another Side,” a sleek funk/fusion piece for quintet featuring Simon on Nord electric piano, Brewer on electric bass, and Zenón quicksilver alto threading its way through the lithe, stuttering groove.

Another highlight was trombonist Robin Eubanks’s arrangement of “Inútil Paisagem” (Useless Landscape), a chamber jazz piece that keyed on a duet between Wolf and Simon’s Nord sounding like a strummed guitar. In rendering the bereft melody, Eubanks’ burnished tone and legato phrasing provided a moment as lovely as any in the concert.

At the end of the 85-minute concert, which was produced by San José Jazz, I took several thoughts away from the Hammer. Zenón, who’s served as the Collective’s de facto music director since the departure of founding pianist Renee Rosnes about a decade ago, is going to be very hard to replace (no one’s asking me, but I hope Tia Fuller, Kasey Knudsen, and Caroline Davis get serious consideration for the alto chair). In marking his departure, SFJAZZ is releasing a two-disc album collecting his Collective commissions, Miguel Zenón Retrospective: Original Compositions, 2004–2016. More than impressive, it’s a body of work that traces the evolution of one of jazz’s sharpest minds unleashed with enviable resources. I’m looking forward to seeing where Zenón and the Collective head as their paths diverge.