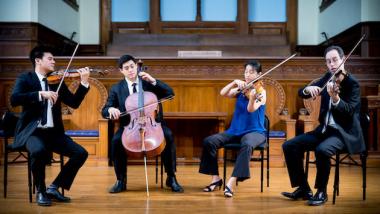 The members of the Telegraph String Quartet made a triumphant return to their Bay Area home with a Noe Valley Chamber Music series concert on Sunday, bearing a new piece from exotic New York written just for them. This concert at Noe Valley Ministry concluded the series’ 25th season and also marked the retirement of Karen Heather, its founding artistic director.

The quartet’s second violinist, Joseph Maile, explained the new work to the audience. After the quartet won the Walter W. Naumburg Chamber Music Award in 2016, Robert Sirota — distinguished New York composer and president emeritus of the Manhattan School of Music who had been commissioned by the Naumburg Foundation to write a piece for the winners— mused on the quartet's style. Sirota’s practice, as Maile explained, is to listen to the performers and then craft a work specifically designed for what he sees as their personalities.

So the quartet members wondered when they received the score of Sirota’s String Quartet No. 3, “Wave Upon Wave,” and found that the tempo indication on the first movement was “Relentless.” Was that really how he saw their playing?

They shouldn’t have been so surprised. “Relentless” is a good description of their style, better than it is of the work it was applied to. Sirota writes that his quartet was inspired by the human heart, in both the physical and emotional meanings of the word. There are heartbeat rhythms in the work at various points, notably at the very end from Jeremiah Shaw’s cello as the other players hold a quiet dissonant chord. The “Relentless” movement is less so in pulse than in character. It’s dominated by raw, heavy writing, with declamatory passages in the manner of Shostakovich, especially from Pei-Ling Lin’s viola, but that don’t build up to a climax.

Elsewhere, the work offers quiet and slow oscillation with steely playing on the bridge, or light and rapid music with pitch slides and buzzing. Some listeners found this quartet to be a miscellaneous collection of effects, but Sirota, often inclined toward more delicate writing than what he offers here, limited his choice of special effects, and I found that the variety of moods was integrated.

The  piece that really showed the Telegraph Quartet being relentless was Ravel’s Quartet in F. This is a highly mutable work that sounds different from every ensemble that plays it. The Telegraph characteristically dug almost viciously into the agitated finale. The first movement offers opportunities to wallow contentedly in impressionist harmonies, but the Telegraph skipped briskly over that element. What stood out vividly in this movement were the occasional pizzicato notes. This made the following Scherzo, which is almost more pizzicato than not, jump out with determined energy. It wasn’t the flashy fireworks of a lighter performance: more of a darker, controlled explosion.

The program also included Mozart’s Quartet in D Major, K. 575, which the players cannily placed first. This showed a subtler form of relentlessness. The Telegraph played the piece as a delicate little thing, taking off from the sotto voce instructions at the beginning of the first two movements. The playing, while restrained, was intensely crisp, with dazzling exchanges of notes between the instruments and chirping staccato runs. Real fortes did appear when Mozart called for them, but that was a rare requirement.

Besides playing relentlessly, the Telegraph plays with a striking unity. It’s not so much that the players breathe together, as the Takács Quartet does, but that they move in perfect step. At many points, the only simple way to tell — without looking — which instruments were playing was by timbre. This meant that the two violinists, Maile and Eric Chin, had a strikingly similar sound, which deprived the performance of some much-needed contrast.

This was the most emotionally open performance I’ve heard the Telegraph Quartet give. That’s still a relative evaluation, as this group never wears its heart on its sleeves. Its heartbeat stays inside the music, where Sirota put it — as did Ravel and Mozart in less literal ways. This group relies on its relentless intensity and precision. Just a touch of human emotional acknowledgment makes for an effective concert.

Correction: This story has been changed to reflect the fact that Robert Sirota was commissioned to write a piece for the Naumburg Competition winner, not for the Telegraph Quartet.

The quartet played for a smaller crowd in the intimate setting of the Presidio Officers’ Club.

The theremin virtuoso demonstrates the strengths and limits of the quirky electronic device, while Friction drives off in "Little Red Corvette."