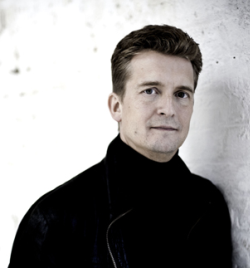 Christian Tetzlaff is a serious music connoisseur’s violinist. He is not out to charm or entertain. You won’t find him releasing a Valentine’s Day CD featuring a collection of romantic tunes. Tetzlaff explores unusual sounds, pushes the boundaries of violin playing, and expresses ideas usually buried in most-intimate and almost forbidden depths of the soul that seldom dare to be conveyed on public stage. Even the format he chose for his Tuesday recital, under the auspices of Cal Performances, is rarely attempted: a solo recital with no piano accompaniment.

Tetzlaff’s penchant for challenging material (for both performer and listeners) led him to present a set of works by Ysaÿe, Bach, Kurtág, and Bartók, using a programming style that has earned him a reputation for being a cerebral musician. The first time I heard him was when he emerged onto the world stage with the fearfully difficult Schoenberg Violin Concerto at Davies Symphony Hall. A few years later he returned to perform all six unaccompanied Bach violin sonatas and partitas (with an hour-long intermission) at the cavernous, yet dry, Hertz Hall in Berkeley. On both occasions he was most impressive, but on Tuesday, in the more intimate acoustics of Berkeley’s First Congregational Church, I finally felt able to peer into the vast complexity of the violinist’s soul. In the smaller space Tetzlaff could truly whisper with his violin and carry out the finest details. Yes, it was cerebral and intelligent playing, though that in no way detracted from the passion and natural flow of the music.

Tetzlaff expresses ideas usually buried in most-intimate and almost forbidden depths of the soul that seldom dare to be conveyed on public stage.In selections from György Kurtág’s (b. 1926) Signs, Games, and Messages (composed 1987–2005), Tetzlaff mostly played in gradations of piano, pianissimo, pianississimo, and many shades in between. At times his bow stroked about three inches into the fingerboard to produce an otherworldly flautando (flutelike) sound, which the New Yorker claims that Tetzlaff discovered. His modern violin, by Stefan-Peter Greiner, is capable of producing amazing colors, a diverse palette that Tetzlaff employed even in Bach’s C-Major Sonata, a piece that usually carries on harmony and counterpoint. Exploring tone colors in Bach unlocks expressive potentials that add yet another dimension to the already complex music. The Allegro Assai was so fast it was almost unrecognizable, with a soft little ornament at the end to prove that Tetzlaff also has a sense of humor.

Eugéne Ysaÿe’s G-Minor Sonata opened the recital and cast a spell that even the following morning haunted me. It was the most captivating music making that I have heard in a long time. The climax of the first movement was breathtaking. Checking the score after the concert, I found that most of the piece is hushed, and though it rises to forte on a few occasions, the fortissimo is reserved for only that climax. This is exactly what Tetzlaff played, with the gnarly crescendo before the fortissimo executed admirably, and a perfectly-timed-for-the-hall silence right before that fateful E-flat chord. The sul-tasto tremolo (tremolo played near the fingerboard) sighs after this climax were downright creepy. A few minutes after this gripping intensity, the Amabile third movement was one of the few graceful moments of the concert, but it too was complicated by Ysaÿe’s crazy chords.

Also incredibly intense was Béla Bartók’s Sonata for violin. Its fugue subject was hammered in so hard that it was impossible to miss it whenever it occurred. Throughout the recital, Tetzlaff swayed wildly, employing carefully balanced footwork in conjunction with arm, finger, neck, and back movements to transfer energy from his soul to the violin. He played with his entire body. If the intonation was not perfect, it did not matter at all.

Since Bartók would have been a rather dark and rough way to end a recital, he tossed off a flashy Paganini 16 encore and, for good measure, added the dreamy lullaby of the “Heartbeat” movement from Bach’s A-Minor Sonata.