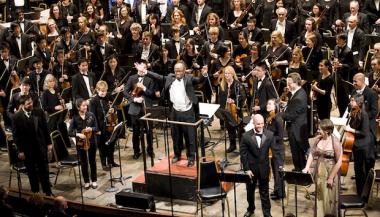 From scraping by financially to associations between creativity and madness, the concept of the struggling artist has existed for centuries. In a program called “The Artist’s Struggle” on Friday evening at the historic Paramount Theatre, the Oakland Symphony paired two contrasting works: Bernstein’s Serenade and Tchaikovsky’s “Pathétique” Symphony No. 6. The juxtaposition suggested that while the difficulties of being an artist may range widely  the struggle is nonetheless worthwhile.

Although neither of these pieces was intended to tell a specific story, they were both inspired by non- or extra-musical ideas. The full title of Bernstein’s work is Serenade after Plato’s Symposium. Plato’s text is about a banquet during which the guests take turns giving speeches praising Eros, the god of love. Bernstein (whose centennial the Symphony was celebrating) indicated that each of his five movements alludes to a different character in Plato’s dialogue. Furthermore, each speech considers love from a different perspective — nodding to this, perhaps, each distinct musical movement evolves from ideas in the preceding one.

While the name Serenade resonates with the theme of love, this piece is basically a violin concerto for a soloist and string orchestra with percussion. On Friday, the soloist was the Symphony’s own principal second violinist, Liana Bérubé. Any ensemble would be lucky to have her in its ranks.

Standout moments included the gorgeous solo melody that opened the first movement, as well as Bérubé’s spot-on soft entrances in the second. A humorous Scherzo introduced the weightier final two movements. Bernstein associated the fourth movement with Plato’s character Agathon, whom the composer said delivered “Perhaps the most moving speech of the dialogue.” It sounded like a beautiful, solo-dominated cantabile. The final movement, “Socrates,” was a rondo rendered more serious via a slow introduction.

Whereas Bernstein’s piece was loosely inspired by Plato’s text, the story behind the final symphony that Tchaikovsky ever completed is subject to speculation. The composer initially wanted to subtitle it simply “Programmatic Symphony,” albeit without specifying a program. His brother suggested the “Pathétique.” Certainly, the composer died nine days after conducting this symphony’s premiere, though whether he died due to cholera or instead by suicide is unknown. Therefore, some listeners hear this work as a tragic autobiography, while others hear the drama of life writ large in it.

Regardless, most people agree this is a masterpiece. The bassoon opening made it instantly audible that the winds had rejoined the strings, and the third movement’s clarinet solo also deserved a shout-out. But arguably the last movement was the best, and ultimately trailed off tragically, just as Tchaikovsky had ambiguously intended.

The musicians shook off Tchaikovsky’s solemn work with an encore, followed by dessert in the lobby. After all, the evening was a celebratory one, and for a few reasons: Bernstein’s centennial; the finale of the Symphony’s season; the concert was dedicated to the departing Interim Executive Director Cristine Kelly; and the appointment of a new executive director, Mieko Hatano. Working alongside the charismatic conductor Michael Morgan, Hatano will oversee the Symphony, Symphony Chorus, Youth Orchestra, and all educational-outreach programs.

To maintain this festive flair throughout the whole evening, volunteers wore top hats that had been adorned to look like cakes. They encouraged audience members to make donations while also pointing toward what makes the Oakland Symphony more than a premiere East Bay musical ensemble. Namely, the Oakland Symphony manages to foster a strong sense of community. In fact, an insert in the program notes indicated that more than half the Symphony’s funding comes from individual contributions. On Friday, donors in the audience proudly sported stickers identifying them as such.

As a result of all this good cheer — and even though the program concluded with the Pathétique — I left more in tune with Bernstein’s ode to love. After all, while artistic struggles are very real, the Oakland Symphony is proof that, when we work together, a community can rise above them.

Getting Gritty with Dirty Cello

It’s a band that can go from blues to Bach and back to bluegrass and folk. And the audience is growing.