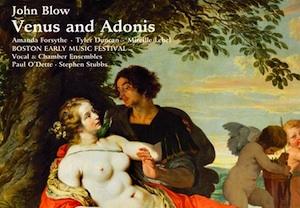 The Boston Early Music Festival’s Vocal and Chamber Ensembles were formed in 2008 to present operas for small forces. Jointly directed by lutenists Paul O’Dette and Stephen Stubbs, this group has enjoyed great success with their efforts thus far. Their 2009 production of Handel’s Acis and Galatea recently hit the road for a North American tour, making it as far as Seattle. Their most recent project is the release of a new recording of John Blow’s Venus and Adonis, the first chamber opera released by the Boston Festival on the CPO label — and, with luck, the harbinger of more to come.

The mood and content of Blow's Venus and Adonis reflect the political milieu in which it was born. The years that followed the English Restoration were tenuous ones for the king and his courtiers. Charles II’s inability to sire an heir provoked fear among Protestant Parliamentarians of the possibility of a Catholic succession. Charles’ Francophile tastes may not have done much to ease these fears, but they provided royal composer John Blow with a rich musical style to exploit for his only extant stage work, Venus and Adonis. Blow’s 1683 opera reflects the tense atmosphere of its court through a haunting darkness that pervades the music and the original Ovidian myth, though Blow and his anonymous librettist clearly tried to lighten this dreary atmosphere by injecting some of the mannered silliness characteristic of the French divertissement. The new recording of the work is at its best when the drama is heavy, tugging at the heartstrings through Blow’s delectably dissonant, expressive music.

The heart of Blow’s work is its third act, in which Adonis is summoned back from a hunting trip by his worried lover, Venus. Her worst fears are confirmed when he returns, gored by a boar, and beyond the help of even his lover’s divine powers. This is where the Boston Festival’s chamber groups shine. Taking the tragedy here deadly seriously, soprano Amanda Forsythe unleashes a torrent of sobs, accompanied by a rich tapestry of continuo instruments. The effect is stunning, a model example of just how expressive this style of recitative can be. The following arioso and chorus are also chillingly beautiful; while they may never achieve the widespread acclaim of the sad denouement of Purcell’s beloved Dido and Aeneas, these final moments, in the hands of these performers, show Blow at his best.

Somewhat less musically satisfying are the comic antics of the second act, which function much like the divertissements of French Baroque opera. Here, Cupid and his mother swap advice about how best to deal with mortal lovers in an aside that does nothing to further the plot, and is completely reliant on the performers’ charm to be effective. Mezzo-soprano Mireille Lebel possesses a warm, rich, and beautiful voice, and sings the part of Cupid ably. But somehow the whole complex just doesn’t quite work in this recording. Lebel can’t quite achieve the level of mischievous humor that must have been inherent in her 17th-century predecessor’s performance — the role was originally played by Mary Tudor, Charles II’s illegitimate daughter, who was at the time around 10 years old. Venus was played by her mother, Charles’ erstwhile lover, Mary Davis. The delectability of this little courtly family drama is largely lost in this recorded version, and surely fared better on stage at the Boston Festival, where visual and dramatic artistry could supplement the musical material.

Throughout the recording, baritone Tyler Duncan provides a sonorous, powerful voice for Adonis. His low range is exploited for full dramatic effect — Adonis is a manly man, after all — and his sweet upper registers perfectly suit the amorous side of this ill-fated hero. The band, too, is great, particularly in a somber Ground that comes amid three additional pieces that supplement Blow’s slender opera. The other added works, Welcome Ev’ry Guest (a Saint Cecilia Ode) and the polyphonic Chloe Found Amyntras Lying All in Tears, swell the disc’s contents to a respectable 65 minutes, and are beautifully performed.

The sound on this disc is clean and mostly well-balanced, though the plucked continuo occasionally dominates a bit too much for my taste. The packaging is sumptuous, with beautiful full-color artwork, as well as photographs of virtually everyone involved in the production. The jewel booklet also includes two informative and interesting essays.

This recording proudly stands alongside the few CD issues of Venus and Adonis and would make a good addition to any Baroque opera fan’s library.