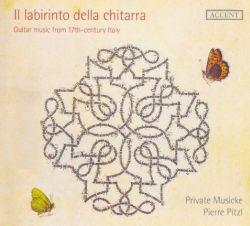 Two new CDs from Accent complement each other in a surprising way. Their contents could hardly be more different. One features solo and small ensemble guitar music from 17th-century Italy. The other presents half a dozen concertos by Johann Friedrich Fasch (1688-1758), a contemporary of J.S. Bach. What these two recordings have in common, besides the top-notch interpretive and technical skills of their players, is a timbral interest that encourages listeners to sit up and pay attention.

The guitar recording comes from an ensemble called Private Musicke, led by Pierre Pitzl. The group’s biographical blurb in the CD booklet explains that they alternate between being a a consort of viols and a group of plucked strings, but that what unites all their projects is the goal of “a unique sound concept [that] leaves the listener amazed once again by the ensemble’s compelling arrangements and extensive repertoire.”

Indeed, this recording delivers on all these fronts. Its timbral palette is as wide as possible with such a limited set of instruments. At times, the listener is invited into the most intimate sound world imaginable, as if stumbling upon a Venetian lady enjoying quiet moments with the innocent pleasures of a simple guitar. One chillingly beautiful instance of such a solo performance is the little suite by Giovanni Battista Granata that comes near the end of the disc. At others, Private Musicke injects scintillating effects into their arrangements of these intabulated works. The percussion instruments that fill out the texture of many of the tracks help the ensemble to craft carefully controlled performances with expressive ebbs and flows and well-timed climaxes.

No fewer than nine composers are represented on this disc. Some of them are quite obscure, such as Ferdinando Valdambrini and Carlo Calvi. Others, such as Nicola Matteis and Francesco Corbetta, will be more familiar to early-music enthusiasts.

The recorded sound, lovely though it may be, is worlds away from what these instruments sound like in person. For example, the acoustic atmosphere of the Ciacona by Giovanni Foscarini, is incredible in all senses of the word, but the microphones must have been placed basically inside some of these little instruments for this amount of resonance to be recorded. If your preference is for recordings to convey sonic reality, then this disc is not for you. If you want beautiful performances combined with an exciting recorded sound, then the disc could hardly be more highly recommended.

Taking on a Trendy Genre With Panache

The release, by Il Gardellino, of concertos by Fasch could hardly be more different in terms of repertoire and style. Here, the recorded sound is quite conservative, and the musical language is totally familiar. J.S. Bach may have been the most famous composer to write “concerts for multiple instruments” but he was not the only German to embrace the genre. This recording shows, above all, Fasch’s amazing inventiveness when it came to the concerto form, and the diversity of timbres that could be showcased in this trendiest of early-18th-century genres.

The first concerto on the disc illustrates this as well as any of them. The opening track resounds with exciting trumpets and drums accompanying a traditional Vivaldian ritornello. The soloists prove to be violin and oboe, which alternately take the lead role, and which are used in beautifully idiomatic ways in the second movement.

Further on we hear yet more diverse orchestral colors. Those trumpets aren't just in there for special effects, but emerge as solo instruments in the final concerto on the disc. And Fasch could be a little exotic, too, providing a beautiful concerto for two oboes da silva (another name for the oboe da caccia), two violas, two bassoons, and continuo. The result is a sweet, dark sound that is somehow akin to Bach’s Sixth Brandenburg Concerto.

Throughout, the performances on this disc are of the highest caliber. The orchestra plays with a flexibility of tempo and impulse that is never idiosyncratic or distracting, and the diversity of expert playing across this broad spectrum of instruments is a rare find.

Unlikely bedfellows, perhaps, but these two discs make a wonderful pair of additions to an early-music collection. Together, they remind us of the wealth of possibilities, the excitement, and the experimentation typical of Baroque composers.