For more than a decade, we have been gifted with recordings of mélodie by two superb French sopranos, Sandrine Piau and Véronique Gens. Both may now be in their 50s, but judging from their most recent recordings, both remain in their prime. Gens, who recorded her latest recital, Nuits (Alpha 589), in August 2019 at the age of 53, sings with the voice of springtime in full blush. Her finely polished, exceptionally warm and smooth midrange is blessed with grace. It’s different than the glamorous instrument of her esteemed predecessor, Ninon Vallin, but equally gratifying. As Gens ascends on high, her voice may become more operatic in nature — it’s perfectly suited to one of her major roles, Donna Elvira in Mozart’s Don Giovanni — but it retains its connection to a heartfelt core that is balm to the ear. 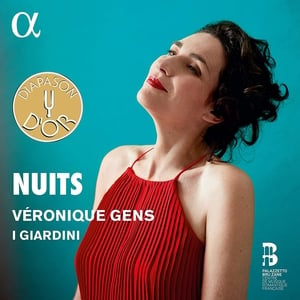 What matters most in this recital, besides the sheer deliciousness of voice and repertoire, is the unifying nature of mélodie either written or newly arranged for soprano and piano quintet by Alexandre Dratwicki. The program, devised by the Palazzetto Bru Zane and Alpha Classics for Gens and the ensemble i giardini, supplements three works originally devised for voice and piano quintet — Gabriel Fauré’s “La Lune blanche luit dan les Bois” (The white moon shines in the woods) from La Bonne Chanson, Guillaume Lekeu’s “Nocturne” from Trois Poémes, and Ernst Chausson’s Chanson perpétuelle (Never-ending song) — with arrangements of other melodies interspersed with several instrumental selections/excerpts. Save for a violin whose bright edge is a mismatch for Gens’s polish, it’s a total success.

For one selection that sums up Gens’s remarkable ability, I’d single out her deliciously idiomatic take on Marcel Louiguy’s “La Vie en rose” (Life in rosy hues). You don’t need to read the lyrics by the inimitable Édith Piaf with Henri Contet; just close your eyes and immerse yourself in one of the most charming and seductive interpretations of this gem you may ever encounter. Were that not enough, it’s followed by equally seductive interpretations of Messager’s “J’ai deux amants” (I have two lovers) from the operetta L’amour masqué (Love in a mask) and Reynaldo Hahn’s “La dernière valse” (The last waltz). Gens may not possess the light, thin, and pure voice of sopranos of La Belle Époque, but the way she delights in spinning her voice as she softly tapers ends of phrases, without drawing attention to her technique, is a joy all its own. You don’t want this recital to end.

The beginning of the recital is equally beautiful. Some may prefer a less vibrato-rich voice in Berlioz’s “L’île inconnue” (The unknown island) from Les nuits d’été (Summer nights), but there’s no denying that Gens captures the music’s verve and spirit like few other sopranos. Jules Massenet’s infrequently heard “Nuit d’Espagne” (Spanish night) is seductive and exotic, and Saint-Saëns’s ultraromantic albeit politically incorrect “Désir de l’orient” (Yearning for the orient) is graced by pianist David Violi’s waterfall of sound.

Gens’s creamy midrange cedes to convincing passion as she communicates the full emotional and musical range of Chausson’s Chanson perpétuelle. She may miss the ultimate sadness of Guy Ropartz’s “Ceux qui, parmi les morts d’amour” (Among those who died from love) from Four Poems after Heinrich Heine’s Intermezzo and Fauré’s familiar “Après un rêve” (After a dream), but her floated tones are a joy all their own.

The instrumental selections are mixed. The first, Fernand de la Tombelle’s Orientale, is a repetitive trifle, and the Molto vivace from Charles-Marie Widor’s Piano Quintet No. 1, Op.7 is light and delightful, if ultimately inconsequential. Far more in keeping with Gens’s excellence is Liszt’s La lugubre gondole (The lugubrious gondola) for cello and piano. The smoothness of Pauline Buet’s cello is a perfect complement to Violi’s piano and Gens’s artistry. But as a curtain raiser on Gens’s final three gems, the oh-so-French Saint-Saëns works quite well. Besides, it’s those three vocal selections, plus many of the others, that you will play over and over again.

With so many options available to you, I hope you will find ways to enjoy this album other than the compromised sound of YouTube. As with the other two recently reviewed discs in Alpha’s sterling trio of vocal recordings, Nuits is available to stream in full CD quality and high resolution on Tidal and Qobuz, and downloadable in various formats and resolutions from HDTracks.

If you haven’t done so already, grab yourself a little USB digital-to-analog converter from AudioQuest or something far better, attach it to your phone, computer, or tablet, and enjoy the realistic timbres, depth, and convincing airiness of high-resolution audio in music that will provide satisfaction for years to come. (Note: Read the author’s full description about how to enjoy streaming audio at its best here.)