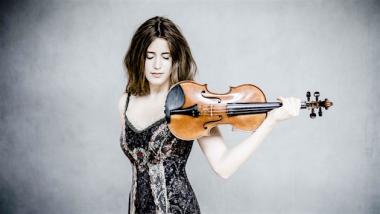 Over and over, as she made her way through the challenging, broad terrain of Elgar’s Violin Concerto in B Minor, soloist Vilde Frang turned her gaze toward the stage-right entrance at Davies Hall. It was as if she were expecting — or dreading — the arrival of someone else to further complicate the musical narrative in process.

Somehow, that unusual bit of stage presence was of a piece with the Norwegian violinist’s quirky performance with the San Francisco Symphony, under guest conductor Krzysztof Urbański’s baton. Fervent and undeniably dramatic, the solo part was marked by episodes of sobbing tremolos, heroic double-stops, ferocious attacks, and whisperingly fragile pianissimos. For much of the way, this physically slight but formidable artist, dressed in a floor-length salmon-colored gown and sheathed in self-possession, seemed hell-bent on going her own way. It’s not that she and the orchestra were at odds, exactly. Urbański is too fine and sensitive a conductor to let that happen. Tempos, by and large, were in accord.

But like a diva who’s determined to see and do things her way, Frang charted a determined and strangely solitary course. Her tone, by turns flinty and keening, scratchily dry and heavingly expressive, whipsawed through the expansive 45-minute work. When the eventful journey reached its declarative end, the audience at Davies rose to their feet to acclaim it on Friday, May 24.

For this listener, the flash and fire, as well as the almost quivering shows of tenderness and vulnerability, impressed from moment to moment but never cohered into a lucid interpretation.

To be sure, there were some surpassingly lovely and alluring aspects. The first of them didn’t involve Frang at all. In spinning out the concerto’s long opening material for orchestra alone, Urbański elicited a solemn yet caressing statement of the work’s thematic foundations.

The soloist and orchestra conjured a reverent ambiance in the Andante. Nothing surpassed the subdued and meditative cadenza in the final movement, as Frang sent her wonderstruck melodies meandering over the plush surface of softly strummed strings. Everything came together here, as it hadn’t, earlier in that same movement, when a measure of playfulness and exuberance went missing.

Like Frang herself, who continued to glance at the door through which she came and went, the audience had to search for the intermittent and inconsistent rewards this reading of the Elgar piece offered.

In a late revision to the program’s order, the concert opened with a completely winning performance of Grażyna Bacewicz’s 1943 Overture. This first performance by the San Francisco Symphony made a welcome short curtain-raiser and introduction to the Polish composer (1909–1969), who endured through the Nazi occupation of her homeland. She turned out an impressive quantity of work during those turbulent and trying years, including the piece on this bill.

The Overture, an elegant da capo style work with a poignant slow section sandwiched between two burbling outer passages, delighted right away. The whirling string figures and bright percussive colors brought Bartók at his most ebullient to mind. The orchestra captured the momentum, capering along until the mood shifted several minutes in. Here the players plumbed the mordant, wistful interlude before a return to the joyful temperament. The brasses added a jolly military-style flourish at the end.

Urbański, who conveys a keen attentiveness on the podium, devoted the shorter second half of the program to Mendelssohn’s Symphony No. 4, “Italian.” The two outer movements were especially fine, free-spirited, glossy, and richly detailed. The conductor, who described a clear beat with his right hand (except when he occasionally entrusted the self-perpetuating tempo to the musicians), used the expressive finger action of his left hand to seemingly extract phrases from thin air and make them palpable. The result here was a translucent texture, with the cellos emerging here and the woodwinds there like bright threads in the weave.

If the two middle movements didn’t shine quite as brightly (the Andante bordered on the ploddingly routine), the performance returned to form at the end. Reminiscent of the composer’s intoxicating music for A Midsummer Night’s Dream, the closing Saltarello dance movement took off and never looked back over its happily flexing shoulders.

The young violinist plays a thrilling Mendelssohn concerto in perfect synch with the S.F. Symphony