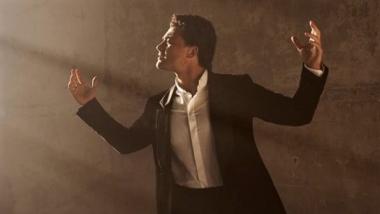 Put two of opera’s mega-stars — Angela Gheorghiu and Vittorio Grigólo — together with a full orchestra on stage at the 500-seat Broad Stage in Santa Monica, and you’re going to get vocal fireworks.

The night could have easily turned into an ego-fest, an “any note you can sing, I can sing higher” competition. It didn’t. This was a brilliant showcase for two singers, both at the top of their form, clearly enjoying the moment and each other.

The program was an operatic layer cake that alternated orchestral interludes (conducted by Eugene Kohn) with solo arias and dramatic duets, Gheorghiu and Grigólo portraying a succession of star-crossed lovers from Gounod’s Romeo and Juliet to Puccini’s Manon Lescaut and Tosca, ending with Tony and Maria from Leonard Bernstein’s West Side Story.

But at intermission all anybody seemed to want to talk about was, “that dress” — a questionable piece of revealing couture in black that made Gheorghiu look like a cross between Morticia Addams and Raquel Welch. It was certainly not appropriate for young and innocent Juliet. Gheorghiu’s two subsequent gowns were considerably more conservative and regal.

Gheorghiu and Grigólo had any number of great opera duets to choose from, and they are both singers who can match the action to the word and the word to the music. Even with the limited amount of stage space, the singers found ways through their interaction to make each duet as powerful as if it were fully staged.

Their Tosca duet also produced a humorous moment of improvisation. As the artist and the diva rhapsodized about the aroma of flowers in the night, Grigólo spontaneously snatched a handful of flowers from the set decoration and presented them to Gheorghiu. Unfortunately the flowers were dripping wet and the water splattered onto her silk gown. But she rolled with it, conspicuously wiping her gown and then forcefully returning the flowers to their vase.

Grigólo and Gheorghiu both have big voices capable of reaching the highest tiers of any opera house. Placed within the confines of the Broad Stage those voices took on titanic force. Rarely, if ever, has the hall resounded the way it did Tuesday.

Grigólo demonstrated dynamic power throughout his range, with an ability to expand the impact of his upper register notes. His highest notes, up to and including high C, were rock solid. He is a bit of a ham. His dramatic style and propensity to overplay heart-on-sleeve emotions certainly go over the top. But the strength and luster of his voice cannot be denied. When he switched to a microphone for his dulcet rendition of “Maria” from West Side Story, he held the final pianissimo high note for what seemed an eternity. He then mugged to the audience triumphantly.

There’s a lot of Maria Callas in Angela Gheorghiu. Her soprano possesses the same amber hue that can soar lyrically or cut like a spinto blade. Her Floria Tosca, like Callas’s, is a force to be reckoned with. She also can go comfortably into her lower register, as she demonstrated in her opening aria, “L’amour est un oiseau rebelle” from Carmen.

The orchestra, which initially sounded tentative, consistently gained strength and provided an excellent accompaniment to the singers.

There were a series of encores, including Grigólo belting “Di quella pira” (from Il Trovatore) and Gheorghiu crooning “O mio bambino caro” (from Gianni Schicchi). The whole affair ended on a conga line beat with the two stars (Grigólo now wearing a red sequined dinner jacket over his skin tight black t-shirt) swaying to “Besame Mucho.”

Catching Up With Evelyn Herlitzius

The dramatic soprano is bringing her highly praised interpretation of Brünnhilde to San Francisco for June's Ring of the Nibelung performances.

Anderson's Landfall is an unmissable work, created with Kronos, while countertenor Fagioli blows away the competition in Handel arias.