Most concertgoers know Verdi’s Nabucco only for one song, “Va, pensiero” (Go, thought), the chorus of the enslaved Israelites: with its evocation of life “in a country loved and lost,” the song has remained an anthem for oppressed people. But in the opera, its nostalgic plangency is a setup for a very different affect, a resurgence of armed and violent resistance. As the song ends, the high priest of Israel bursts in on the nostalgic mourners and angrily urges them to action, prophesying the annihilation of their captors, the Babylonians led by Nabucco (the king of Babylon known in the Bible by the longer but unsingable name Nebuchadnezzar). “Not a stone will be left to tell the stranger where once proud Babylon stood,” declares Zaccaria, in a seeming echo of the ruined image of Ozymandias, “king of kings,” in the poet Shelley’s famous sonnet.

Nabucco was Verdi’s first major opera success, written after the searing failure of his second opera and a series of brutal personal losses. The opera is clearly a young composer’s desperate attempt to seize attention: The energy mostly lies in a series of violent reversals. The Israelites try to defend Jerusalem but Nabucco burns their temple to the ground. Nabucco fights off an insurrection in Babylon, declares himself a god, and, in a grand coup de théâtre, is immediately stricken insane. Finally, when Nabucco — who in his madness has ordered his own daughter’s execution — renounces godhead and converts to Judaism, the Babylonian idols collapse on stage and the king instantly regains his sanity and his daughter.

West Bay Opera’s current production of Nabucco played the young Verdi’s theatricality as far as they could, given the small stage of Palo Alto’s Lucie Stern Community Center. There may have been no triumphal entry into Jerusalem on horseback for Nabucco, but digital projections provided plenty of Babylonian images of aggrandizement, including the famous lions of the Ishtar Gate from the Berlin museum and a gigantic nude Babylonian fertility goddess (the Burney Relief from the British Museum).

The title role was slated to be sung by West Bay regular Jason Duika. But on opening night, for reasons left unexplained, Duika was replaced by veteran baritone Roy Stevens, recently appointed artistic director of Modesto Opera (and singing the role of Rigoletto there this coming weekend). Despite a few understandable staging glitches, and some struggles with his upper register, Stevens brought the character to life with physical and vocal energy, playing the mad scenes particularly well. With ironic humor reminiscent of Nigel Hawthorne in The Madness of King George, and some moments of believable anguish, Stevens made this megalomaniac — and later just maniac — tyrant almost likeable, and certainly compelling.

As in every Italian grand opera, politics and passion are inseparable. Nabucco’s daughter Fenena, in love with a Hebrew general and herself eventually a convert to Judaism, remains little more than a pawn in the Babylonian invasion of Israel and a near-victim of her father’s violence. Mezzo soprano Claudia Chapa made the best of this rather passive role, coming into her own vocally near the end with her aria about martyrdom.

Ismaele, Fenena’s lover (tenor John Kun Park), has the bad fortune to be loved also by the aggressive and dangerous Abigaile, who everyone thinks is Nabucco’s other daughter. But Abigaile has discovered that she is actually the daughter of slaves (the backstory remains obscure), and is mad as hell about it.

Abigaile rampages through the opera making things terrible for the Israelites, deposing her father, and trying to kill her supposed sister and rival in love. It’s a great part, and soprano Christina Major, a West Bay Opera regular, nailed it with a plethora of high C’s and swooping coloratura scale-work that brought out the contradictions of her character’s tormented ambitions and jealousy. Unfortunately, as so often in opera, the really interesting female lead is forced to self-destruct at the end: She poisons herself and then abjectly accepts the religion of her enemies in a last-ditch hope for heaven.

The chorus of Israelites — occasionally doubling as Babylonians — sang well but seemed uncomfortable in their movements, as did most of the actors. While this may have been caused by first-night jitters or uncertainty about the last-minute title-role switch, the overall stage direction felt superficial. The fine bass singing of Benjamin Brady as Zaccaria moved us less than it should have because of the frequently wooden staging imposed on him.

The generally strong orchestra, conducted by José Luis Moscovich, began the evening with some serious tuning and ensemble issues, not helped by the strange placement of the trombone and at least one of the horns in the wings, far from the rest of the players. The orchestra was effective in big moments (a dizzying swoop of chromatics, for example, when Nabucco is struck mad), but overplayed the delicate offbeat figurations that so often accompany a Verdi aria.

The plot (with many more wrinkles than I’ve touched on) is complicated to the point of obscurity. I realize that there is a limit to what a production can do to make such things clear; perhaps the details of a plot are finally not as important as other aspects of the show. But it is a shame when supertitles add to the obscurity. West Bay Opera seems to have lifted their supertitles directly from an unsigned libretto on a website called Impresario, where the translation is obscure to begin with. Not many in the audience, I’d guess, could figure out what a line like this could possibly mean: “On the lips of the prophets thou hast fulminated, O almighty God!”

It is hard to miss the contemporary relevance of this violent story of regime change, enslavement, and zealotry. In Nabucco, the struggle comes to a semblance of peace at the end, at least for a moment; but that hardly reduces our sense that the opera is based in an essentially irreducible ferment of faction, ambition, and greed. As we know, such strife is not limited to the Fertile Crescent, nor to the empire of the Assyrians. As West Bay Opera artistic director Moscovich said in his introductory remarks, opera’s not always about the past. 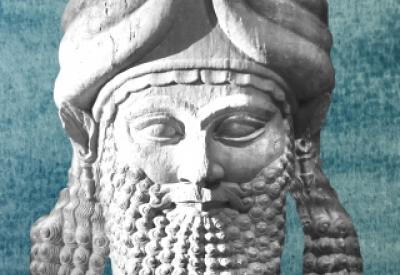