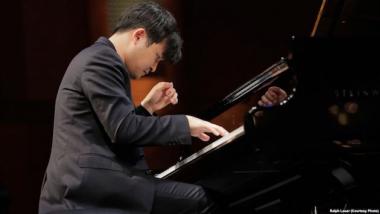 Yekwon Sunwoo Woos Audience With a Champion’s Technique and Expression

The Steinway Society has been presenting piano recitals for over 20 years in the South Bay. Over the years, it has engaged major piano competition winners particularly those from the quadrennial Van Cliburn International Piano Competition.

The 2017–2018 season is no exception, with all three medalists from the most recent competition in Fort Worth. On Sunday, this year’s gold medalist, Yekwon Sunwoo of South Korea filled the McAfee Center in Saratoga.

With so many highly capable pianists churned out by conservatories around the world, winning a major competition is no guarantee of a successful career, and winners must still win the hearts of audiences after a victory. The years following a competition victory present the real competition, and the audience is the real jury.

Sunwoo made a strong case for himself with a stunning, introspective reading of the solemn Schubert Sonata in C Minor, D.958, composed months before the composer’s death. Along with two other sonatas written at the same time, the work is heavily infused with Schubert’s desperate search for peace and reconciliation. Beginning with a dramatic, rhythmically taut opening, the first movement evolved with hopeful lyricism, though darkness always beckoned. Sunwoo was particularly evocative in the prayer-like second movement, perhaps alluding to the composer transcending into the other world. The final tarantella movement unfolded cinematically, with volatile and sudden changes of colors adding life.

Sunwoo’s special quality became self-evident quickly: He possesses the uncanny ability to maintain soaring lyricism, holding counterpoint and accompaniment in an exquisite balance, laying them out clearly using well-differentiated tones and colors. Such a natural inclination turned the Rachmaninoff Sonata No. 2 in the second half of the program into something out of the ordinary. Rather than attacking the work with fistfuls of notes that could easily meld into a wall of sound, he laid out the layers buried in the score into clear compartments. While losing none of the rich, voluptuous Russian romanticism, his delivery was carefully calculated and measured with discipline. It was a refreshing perspective on an overly played, and often overly-indulgent warhorse.

Sunwoo ended the concert program with a macabre reading of Ravel’s La Valse. Rather than evoking romantic nostalgia for 19th-century Vienna, the emerging picture was grim and perhaps even grotesque at times — perhaps reminiscent of World War I — with a terrifying, rumbling roar in the opening. With his characteristic clarity and sparse, judicious use of the sustain pedal, Sunwoo again preserved the intricate details in the score, adding oft-neglected dimensions. Long crescendos came in waves, making subsequent torrents more frightening and the narrative vivid and life-like, but the performance never ran out of breath or strength.

Percy Grainger’s arrangement of “Ramble on the last Love-duet” from Richard Strauss’s Der Rosenkavalier was a kaleidoscopic interlude after the intermission, with a wide gamut of colors, brought out with a deft use of the seldom-used sostenuto pedal, as demanded by Grainger. A brazen reading of Liszt’s La Campanella was a nice ribbon for a well-packaged gift to the audience.

The Cliburn competition anointed its first winner from South Korea.

The Maturing of an Artist: Sean Chen Goes Deep at the Steinway Society

Four years off of a Cliburn Competition Bronze Medal, the pianist delves into unfamiliar material with confidence and insight.