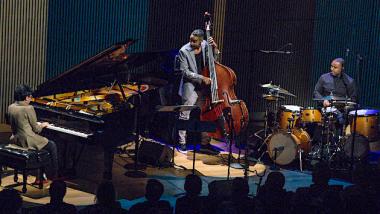 I applaud the timing of Joey Alexander’s engagement at the SFJAZZ Center, in several senses. It’s not just his faultless metric accuracy, drawing hundreds of thousands of viewings on YouTube for such performances as his appearance at a Jazz at Lincoln Center Gala in 2014, at the invitation of an admiring Wynton Marsalis.

There’s also the time of Alexander’s life, at age 15, when he still counts as a diminutive, though long-fingered, prodigy pianist. And there’s his unusually long, four-day gig at SFJAZZ, when the spirit of the holiday season impresses the public, regardless of faith, with the power of the legend of a miraculous, innocent child whose publicity is handled by others, angelic or not.

Alexander, who credited his ability as “a gift of God” when he released his debut album at age 11, recently released a Christmas album and included a couple of jazzified, Christian-friendly numbers on his SFJAZZ set list. Alexander’s manifest time-keeping technique for this concert was handsomely ramified by bassist Kris Funn and drummer Kendrick Scott, with guest saxophonist Chris Potter in to blow some glad tidings.

But Alexander would not have been able to come close to selling out SFJAZZ’s spacious Miner Auditorium four days in a row without having several seasons of fame behind him, and nine years of study, so far, begun on his native island of Bali, in Indonesia, where he was born Josiah Alexander Sila, to jazz-loving parents. His prodigious talent caught the attention of a visiting Herbie Hancock and, via YouTube, Wynton Marsalis, helped prompt the Sila family’s relocation to New York City in 2014. Joey’s mother, Farah, was at his side for CD signings at SFJAZZ, where he’d also had the opportunity to showcase several of his own compositions, some so new that they hadn’t yet been named.

Sunday evening opened with a churchy, original ballad, followed by an arrangement of the mid-19th-century hymn “What a Friend We Have in Jesus.” Alexander seemed at first to be exercising his impressive physicality and to be repeating chord substitution exercises in good stead. On “Inner Urge”, written by the late San Francisco-based saxophonist Joe Henderson (for whom SFJAZZ’s smaller performance space is named), Alexander hovered over tonal centers like a bumblebee, rather than taking flight into more exotic territory.

Saxophonist Chris Potter, whom I’d last seen with Dave Holland and Zakir Hussain at the Montreal Jazz Festival in July, took the stage for a duo showcase with Alexander on the pianist’s soulful ballad “Peace.” Potter’s expansive approach to soloing was immediately in evidence, suggesting where Alexander may be more comfortable going in the future. The pianist will also want to learn to tone down his attack and develop a sophisticated caress of the keys on this sort of material.

Another original, newly named “Friends and Family,” sounded like an amalgamation of user-friendly smooth jazz with the ethereal modalities favored by the label ECM in the 1970s. Scott’s pyrotechnic polyrhythms excited the mix, and Funn had his bass singing alluringly on its own solos, and on an extended intro to “Faithful.” Potter, a renowned improviser, seemed to catch the Trane spirit on this original, laying down tracks that were a bit tough for the composer himself to follow. Alexander’s “City Lights” was a sort of musical self-portrait, in the form of a cute, kittenish blues, with occasional rumbles of rumba.

For an innovative, infectious shuffle take on “O Come, All Ye Faithful,” the ebullient Scott percussed his thighs, and then sparked some battery back-and-forth with Funn. Apparent throughout the evening was the rhythm section’s delight with each other and with Alexander, who proved he works well in ensemble settings and verbalized his appreciation for his cohorts in a still somewhat squawky and charmingly unpretentious adolescent speaking voice, before rewarding a standing ovation with an encore of John Coltrane’s “Moment’s Notice.” Potter, who’d been trading off between soprano and tenor sax, blew a thrillingly fresh solo on this last number.

That Alexander is gifted is beyond doubt. It will be edifying to hear him improvise and explore further, building more expansive and exciting structures with his impressive set of tools. Many of us have learned that growing older means you have more stories to share, and this can be manifest as much musically as in words.

These Musicians Aren’t Clowning Around

Swing into the holidays with our picks for great local gigs featuring jazz and other terrific music from around the globe.