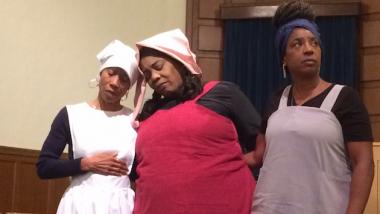 There’s gratitude due Jeannie Gayle Pool, founder of the International Congress on Women in Music, for reconstructing the score of Zenobia Powell Perry’s 1987 opera, Tawawa House. And gratitude abounded on a sunny Sunday afternoon at the Presidio Chapel, where Pool’s Jaygayle Music and the African American Composer Initiative presented a delightful concert performance of the opera, whose first full staging had to wait for a 2014 production by Townsend Opera (now Opera Modesto), 10 years after Perry’s death at the age of 96.

Such is the unsurprising circumstance of a composer no doubt denied opportunity because of both her gender and her race, African-American and Creek Indian. “She knocked on many doors,” said Janis-Rozena Peri, Perry’s soprano recitalist daughter, who sang in the Tawawa House debut, 32 years ago, “but she really wasn’t assertive.” Perry’s music deserved assertion, based on the music I heard at the Presidio and the enthusiastic response to it from both performers and audience.

The dedication of the production to firebrand congressperson Elijah Cummings, who died last week, fit the story of the opera’s title institution, a large building in central Ohio owned by Levi Coffin, a white Quaker farmer, and maintained in the mid-19th century as a hostel for runaway slaves on the so-called underground railroad. The concert setting made use of two narrators — Peri and Greg Savage, an actor and cofounding member of Modesto’s Sankofa Theatre Company. They provided spoken historical notes and the setting of the scenes in which the opera’s 27 short musical numbers play out.

Pool’s assemblage of Perry’s score was transposed for piano by Josephine Gandolfi, who also performed on piano, sometimes solo and sometimes in a four-hand arrangement with Deanne Tucker. LaDoris Cordell, a former California Superior Court Judge, also performed some solo piano and with the vocal ensemble, some of who seemed loosely associated with specific characters in this concert version. There was no cast list in the program. The ensemble was almost exclusively black, with a majority of women.

Most of the score involved Perry’s resetting of traditional hymns, gospel/spiritual songs, dance numbers, and popular music. From the opening full ensemble number in Act I, “Let the Knowing Speak,” Perry proved artful at reimagining older music (like the hymn, here) through the use of altered chords and such alluring devices as open fifths. I wondered if her study with Darius Milhaud at Wyoming University had been an influence in this.

The composer also provided charming interstitial instrumental music, including a hoedown, a cakewalk, and a broom-jumping game that provided time for relocating onstage chairs and a chance for this ensemble to display its engaging nonverbal acting skills, under Pool’s direction. These episodes secured the production’s footing as an entertaining show, despite the lack of a set, minimal costuming, and the other inherent limitations of a concert reading.

The first of many impressive solo vocal turns was soprano Yolanda Rhodes’s “Up Over My Head I See Freedom in the Air,” sung in a piercing coloratura. This was followed by “Shine Along,” delivered in a burnished bass-baritone by Wilford Kelly, who’ll finish his Master’s degree at the San Francisco Conservatory of Music (SFCM) next spring.

Perry knew how to showcase fine voices, and some of the music heard here, notably “They Call the Sun Ol’ Hannah,” sung by Kelly in Act II, should be go-to material for auditions and recitals. Tenor Othello Jefferson, an alumnus of the SFCM undergraduate program, showed a smaller but pleasant voice, nicely supported by Perry’s fluvial arpeggiation of “Follow the Drinking Gourd.” Another familiar tune, “I Am a Poor Wayfaring Stranger,” got a major-mode makeover, some additional lyrics, and a berry-sweet reading by soprano Malikha Mayes, currently pursuing a Master’s in Vocal Performance at SFCM.

Possibly some numbers, like the “Prelude,” which opens Act II, suffered somewhat in the reduction to piano from the orchestral original. But elsewhere, the piano seemed the suitable accompaniment, as in “Sinner Man, So Hard, Believe,” where Perry’s approach to church-based music evoked similarly enchanting explorations by South African jazz pianist Abdullah Ibrahim, back when he was known as Dollar Brand. Other second-act highlights included Mayes’s youthfully fresh but forceful “I Gotta Home in Dat Rock” and Rhodes’s “De Angels Done Bowed Down,” which confirmed her paired value as a singing actor, or an acting singer.

All of this was underpinned by the impression that Perry loved and respected her source material as much as this ensemble enjoyed conveying it. Their combined spirit in turn made a good story out of Tawawa House, which evolved from a farm to a hostel to a resort to an African-American educational institution, until it was set afire by bigots from nearby Cincinnati (on the night of President Lincoln’s assassination) and became the site, a few years later, of Wilberforce University.

Perry herself studied education and music at the Tuskegee Institute and in the graduate education program at Colorado State College, where she was partially sponsored by Eleanor Roosevelt. Although she devoted herself more intently to composition and to graduate study in music in her 40s, she raised daughter Janis as a single mother and worked primarily as an educator, never in her lifetime receiving proper recognition for her creative gifts.

Janis-Rozena Peri fared somewhat better, and managed to position her mother’s concerto for voice, piano, and flute on her own debut program at Carnegie Hall, in 1977. She now includes two or three Perry songs in most of her recitals.

In 2009, Pool published a biography, American Composer Zenobia Powell Perry: Race and Gender in the 20th Century (Scarecrow Press). Pool also maintains a website and has assembled the composer’s scores and manuscripts. I’d imagine there’s a lot left for us to discover.