The New Year’s parade may be over, but San Francisco has not finished ringing in the year of the ox. On Sunday, the San Francisco Symphony continued the 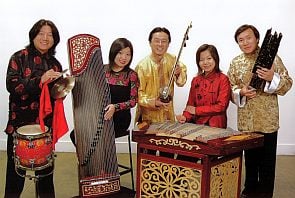 celebration with a Chinese New Year concert, followed by a reception with Chinese dancing, food, and other festivities. The program featured the acclaimed Chinese violinist Siqing Lu, as well as the Crystal Choir and Melody of China, an ensemble of traditional Chinese instruments. With performers and music from both the Western and Chinese classical traditions, showcased the intersection of East and West.

The idea of such musical symbiosis has not always been well-received. China has, historically, been skeptical of Western influence in general. It wasn’t until the 1920s that Western music was introduced on a large scale; the first Chinese conservatory opened in 1925. Western music has grown to be widely accepted since then, though this is still a point of contention for some. A controversial clash of interests in 2002 ended with Qian Cheng, the director of China’s national symphony orchestra, being accused of favoring Western music over Chinese. As a result, he was placed under house arrest by the Communist Party cultural commissars.

Regardless, the presence of Western classical music in China is an undeniable reality. Some traditionalists worry that the growing popularity of Western musical styles will lead to the corruption or loss of traditional music. But instead of resisting the influx of non-Chinese music, many artists have simply adapted. Liu Tianhua, for example, wrote a series of pieces for solo erhu (Chinese fiddle), using Western tonalities and meters that are not normally found in traditional music. The performer is expected to borrow technique from the violin and from other Chinese instruments.

Most early attempts to negotiate multiple musical idioms resulted in compositions that were basically Western, but with an exotic Chinese flavor. Folk songs were set to pianistic accompaniments, for example, and orchestral compositions used pentatonic scales and clichéd melodic motives. Later composers took further steps to combine the styles in more cohesive ways.

The Californian composer Lou Harrison, for example, rejected Orientalist stereotypes. Instead, he studied with Chinese musicians to get a firsthand sense of the aesthetic. Some of his compositions even include modified instruments that imitate the sound and playing technique of Chinese instruments. Similarly, many Chinese musicians have made efforts to play traditional instruments in a Western style. On the erhu, this often means a milder timbre, longer bow strokes, and the addition of vibrato.

Sometimes the instruments themselves are also modified to make them more versatile. The pipa, a type of lute, is a prime example. Originally, it had five frets; now, some are made with as many as 24. Those with 24 frets correspond to the 12-tone scale, making them suitable for playing Western music. Extended ranges also create possibilities for new music; however, as ethnomusicologist Lindy Mark points out, “You always have to think about what is meant by ‘new’ music.” Innovative compositions are often based on traditional melodies, perhaps played in multiple octaves, or arranged for symphony orchestra. The well-known Butterfly Lovers Violin Concerto by He Zhanhao and Chen Gang, for example, is based on a melody from a traditional Chinese opera.

Defining “new” music as the combination of indigenous and imported musics suggests that traditional styles are “old” music. The implication, then, is that this music is for old people — an assumption that is not entirely untrue. “But with any luck,” Mark muses, “young people will become old someday.” Although more young people are currently involved with Western than with Chinese classical music, the trend may be shifting. Mark notes that in looking for fresh musical styles, some members of the younger generation are finding that indigenous music is new, simply because they have had little if any contact with it before. Ironically, the same music that was treated as exotic by Western composers during the 20th century suddenly seems exotic to young Chinese musicians today.

That said, the distinction between Western and Chinese music is not always made. The rediscovery of traditional genres is not necessarily seen as a return to a lost, pure Chinese culture; rather, it is a discovery of another part of that culture. “There isn’t really a consciousness that ‘this is Chinese’ and ‘this is 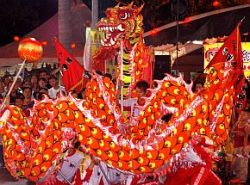 Western,’” Mark explains, “only that ‘this sounds good’ and ‘this sounds bad.’” The “good” and “bad” are not value judgments, but matters of taste. Because both styles have been integrated in so many ways, there is no prevalent sense that one is more valuable than the other.

The Lunar New Year celebration in San Francisco’s Chinatown seeks to establish a parallel sort of cultural integration. The festival gives residents an opportunity to demonstrate the best elements of Chinese culture, largely through the arts. This year’s festivities included lion and dragon dances, which are usually accompanied by shawm (precursor of the oboe) and percussion bands. Lindy Mark recalls experiencing similar performances while living in a country village in China for eight years. Outdoor operas, she reports, were also important events: “The whole village spreads out to hear the opera, even if it’s raining or snowing.” Chinese opera is a part of the Chinatown celebration, as well, and San Franciscans have been known to brave the weather in order to listen in.

In keeping with the spirit of the music scene in China, Sunday afternoon’s concert brought together East and West, old and new. Listeners were treated to Chinese and Western music, played on instruments from both traditions. Musicians from China and from the United States took the stage to welcome the New Year in a musical celebration — times two.