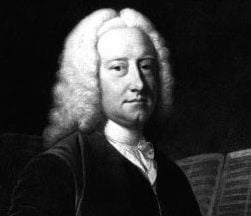 George Frideric Handel is, perhaps, the 18th-century composer most frequently associated with a single famous work. Messiah has long been the Christmas and Easter piece par excellence for church choirs, sing-along groups, and professional musicians. And it is, admittedly, wonderful, filled with some of the most memorable music from any century. Messiah boasts brilliant, virtuoso arias; fugal choruses that satisfy, both intellectually and aesthetically; and an overall balance of elements that makes its three hours simply fly by. No wonder that H.C. Robbins-Landon once lauded the piece’s “perfection.” And yet, Handel wrote hundreds (and hundreds) of works in all kinds of genres. The few operas, instrumental works, and popular oratorios familiar to most classical music fans paint only a small piece of the Handelian portrait.

Getting to hear unfamiliar music by a familiar composer is one benefit of celebrating a musician’s anniversary year, as is happening with Handel in 2009, which marks the 250th year after his death. Although exploring the overlooked music of this composer doesn’t require adapting to an esoteric musical language, nevertheless the effects and musical contents of Handel’s less-known works often surprise the unsuspecting listener. They seem to present a rather different composer than the Handel whom we have come to know and love.

The oratorio Athalia provides one such test case — a work that Bay Area concertgoers can hear, performed by the Philharmonia Baroque Orchestra starting 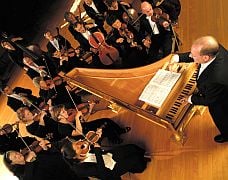 this weekend. Handel’s third oratorio long languished behind its far more famous siblings, Messiah and Israel in Egypt. Yet, as famous as these latter oratorios have become, they are by no means representative. Indeed, it’s hard to point to any one Handel oratorio as a “typical” specimen. Keep in mind that Handel wrote no fewer than 21 English oratorios (not including the somewhat similar works that he called “odes”), and that the composition and premieres of these pieces spanned nearly four decades of his life. These were pieces chiefly designed to please the public, constantly adapted to suit London listeners’ fickle tastes.

Hindsight has hardly been kind either to Athalia or to Handel’s other early essays in this genre. Musicologist Winton Dean, for instance, once lambasted the libretto of Esther as being “self-condemned as manifest nonsense.” Robbins-Landon couldn’t help but compare Athalia with its more famous younger sibling. Athalia, he wrote, could never “attain the perfection of Messiah.”

A Palpable and Profitable HitFine; we all agree that Messiah (1741) is terrific, though few of us know that audiences in the 1730s went absolutely bonkers for Athalia. After the work premiered at Oxford in 1733, it quickly became one of Handel’s most remarkably successful oratorios. Some 3,700 people attended one of its earliest performances. It was a financial hit, too, raking in a staggering £2,700 for the composer during its first run (equivalent to roughly £378,500 in 2007).

So, to contemporary audiences, this oratorio was something to write home about. It’s up to us post-Messiah listeners to uncover what was so great about it, to set aside our canonical frame of reference, and to meet the work on its own terms. 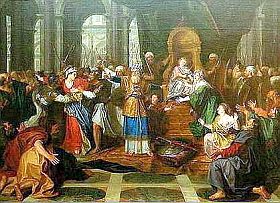 First, it’s important to keep in mind the chronological position of Athalia in Handel’s output. This was the third English oratorio that he produced; thus, it’s an early work in a genre that he famously created, virtually single-handedly.

Athalia is a different beast entirely from Messiah, being a “dramatic oratorio.” In other words, it’s basically an opera without staging, based on a story taken from the Bible, and subsequently dramatized by Jean Racine. Yet Handel wasn’t quite ready to import operatic drama wholesale into a quasireligious work. With the great sacred oratorios of his Italian and German predecessors as models, Handel would surely have felt the need to maintain a sort of decorum. Later dramatic oratorios (like Saul) deal with the story’s action more clearly. Yet, in this early foray, Handel and his librettist, Samuel Humphreys, emphasized characters’ feelings. Handel’s success in balancing up-to-date literary ideals, proper reverence for a biblically based text, and a distinct idea of what he wanted to achieve musically all help to explain the  success of this work.

Still, the story might have made a convincing basis for a fully staged opera. For, like most great, melodramatic opera plots of the period, this one is chock-full of juicy intrigue and saucy characters. The title figure, Athalia, is a murderous idol worshipper, intent on eradicating the Jewish line of David. She manages to kill all but one of the heirs to the throne, Joas. Joas has been raised by Josabeth, wife of Joad the high priest, who has managed to keep Joas’ identity a secret. The plot of Handel’s libretto (based on a play by Jean Racine, and the story from 2 Kings 11 of the Old Testament) involves the emergence of Joas as the rightful heir to the throne, as well as the renewal of strength in the Jews’ struggle against the worshippers of Baal.

The typical complaint about this oratorio is that nothing really happens, unlike the action-packed Biblical story. At the opening of the work, Athalia rants and raves about her possible downfall, and at the oratorio’s end she rants and raves about how she will eventually triumph. Yet nobody truly triumphs. In the view of one critic, the piece’s story line is merely a bunch of rhetoric penned by Humphreys, “a poor poet and inept dramatist.”

But we must ask ourselves whether, in expressing this disapproval, critics might be reading Athalia through a later analytical lens. As in many contemporary dramatic and literary works of this period, plot is hardly the point. Athalia was written during the onset of the so-called sensibility movement, a set of literary and aesthetic philosophies that favored sentiment as the source of morality and empathetic identification. Sensibility characters wore their emotions on their sleeves, often weeping and ranting. And audiences of the time wept with them.

And it didn’t matter whether anything happened or not in the course of these dramas. For example, most of Act 5 of The London Merchant (1731), a hugely successful tragedy by George Lillo that set one of the early benchmarks of sensibility, consists of a tearful sermon on virtue. The close reading of a character’s emotional life, divorced from any lofty ideals or claims to tragic heroism, made sensibility accessible and mirrored the values of the middleclass. Humphreys tapped into a wellspring of literary newness that also helps explain why audiences loved this work so much. Maybe the libretto isn’t so “inept,” after all.

Riveting Mad SceneHandel took the raw material that Humphreys provided, then created a parallel sort of clear, consistent, and brilliant depiction for each of the main characters. For instance, the composer brilliantly depicts Athalia’s anti-Judaic monomania. Her opening music is a mad scene, which might remind some listeners of the roughly contemporary mad scene in Handel’s opera Orlando. Her central rage aria, “My vengeance awakes me,” is a riveting, frightening expression of blind hatred. And, as the text for her final aria hints, Athalia remains hell-bent on the destruction of the Jews to the very end of the oratorio, even in death:

Shall in the due season

Weep blood for this barbarous day!

Handel treats the other characters with equal clarity. Josabeth is a remarkably sympathetic figure — a good foster mother, for once — and her duets with Joas and Joad present tender moments of domestic love rarely treated with such sensitivity in contemporary operatic works.

And, of course, there is the familiar Handelian chorus, sometimes representing Jewish priests and celebrants, sometimes the worshipers of Baal. Handel makes fervent, creative use of the chorus. Freed from the constraints imposed by theatrical conventions, he interrupts arias with choral interjections and creates hybrid aria-chorus numbers. His formal flexibility in Athalia will thrill listeners familiar with the conventions of Handelian opera. The entire oratorio contains only five standard, da capo arias: a far more formally adventurous approach than he uses in Messiah.

So, while Messiah might be a poised work, maybe even a “perfect” one, Athalia is fresh and flexible, exciting and innovative. While the former oratorio is lauded for completeness and unity, the latter might be praised for the clarity of its dramatic characterizations. Because what it may lack in dramatic cogency it more than compensates for in the emotional force of its individual numbers. These two oratorios are works from very different periods in their composer’s musical life, and they boast contrasting strengths and aims. Taking Messiah as a point of reference simply skews our perspective, limiting our ability to appreciate the unique accomplishments of the earlier work.

Fortunately, in the Bay Area we have organizations like the Philharmonia Baroque Orchestra, and experts like its director, Nicholas McGegan, to present this type of rare work, to flesh out our point of reference for understanding this composer who seems so familiar at first blush. Once you’re familiar with Handel’s less-known oratorios, there are all those operas to explore — plus a huge treasure trove of Italian cantatas (and even a French one!). You’ll find more surprises there. Perhaps hearing Athalia during this Handel year will inspire classical music fans to sample the rest of the broad and rich Handelian musical legacy.